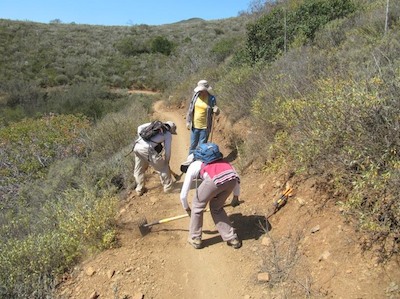 The 32nd annual Santa Monica Mountains Trail Days was held April 19-21 at the Danielson Ranch in Point Mugu State Park. The event coincided with the week of Earth Day and the beginning of National Volunteer Week. Under perfect skies and a little heat, nearly 140 volunteers participated over the weekend, clearing trails throughout the park. Volunteers included members of the Santa Monica Mountains Trails Council (SMMTC), The Sierra Club, and Concerned Off Road Bicyclist Association (CORBA). Individual volunteers and representatives from the Crenshaw Eco Club Alumni, the California Conservation Corps (CCC), and Amgen Inc. participated in the event. Everyone received wonderful goodie bags with aluminum water bottles donated by NPS and insulated travel mugs donated by Giant Bicycle. The effort was noticed by park users, most of whom thanked the volunteers they met that day. The younger kids worked Blue Canyon, clearing mule fat and trimming back overhanging branches while watching out for poison oak. They were thrilled to see the Mounted Volunteer Patrol horses and excited when they were "deputized" as Junior Rangers. The Sierra Club and SMMTC folks tackled the Coyote Trail from both ends, working toward the center. CORBA and others from SMMTC worked Wood Canyon Vista from bottom to top with State Park staff helping with the pole saw and trimmer. Other volunteers with the help of crew leaders from SMMTC worked "Toe Stubber", Old Boney, and Chamberlain trail with the CCC. State Parks, NPS, CORBA, and SMMTC provided tools for the workers. At the end of the day on Saturday, we gathered for a wonderful BBQ cooked by BBQ master Blake Steele from State Parks with the help of NPS staff, friends, and staff from State Parks. There was a lively raffle where some folks showed their gratitude in fun and entertaining ways! After the evening food was cleared away, Leigh Collins from State Parks presented a wonderful campfire program on bats and we closed the evening with a flag retirement ceremony that was very touching.

On Sunday, we had more volunteers than normal and were able to accomplish a good bit of work. Staff members, friends, and families from Amgen worked Lower Sycamore Canyon and the lower portion of Fossil trail on Sunday. The CORBA crew finished up the last half mile of Wood Canyon Vista and work continued on Toe Stubber and Blue Canyon, both of which were overgrown and thick the poison oak. After working, there was another reffle and a 7 layer cake donated by Claim Jumper. In all, approximately 4.75 miles of trail was cleared throughout the park.

As always, I am overwhelmed and grateful to all the folks who come to this event and make such a huge effort on our trails. With many returns year-after-year, it's like a big family reunion. There's always new folk' joining this trail family and new stories to tell, time to catch up with each other, a time to work, and a time to just enjoy the company around the campground fireplace. I made a new BFF with a young boy about 5 years old and I have such a fond memory of a little girl on the trail who summed up everything when she said with a huge smile, I am SO lucky to be out here and I am having SO MUCH FUN!!

Epilogue: Less than 2 weeks after Trail Days, a devastating wild fire burned through Point Mugu State Park, heavily damaging nearly all of Sycamore Canyon, including the trails we worked. The campground and adjacent ranger house was saved, thanks to heroic efforts of our wildland firefighters. After years in the park you make friends with it, the beautiful trees, the amazing habitat, the bratty little critters that try to steal your food, and the ancient history locked in the mountains that's so real you can feel it. Much of that is gone. Many majestic oaks are no more. It was very sad to see the burned landscape, the terrible damage and quite shocking to know that shrub so thick we could barely cut through it was gone in a flash. At the same time, in our initial foray into the canyon to repair as many trails as possible, there were signs of life emerging…an untouched prickly pear blossom, a bobcat, the parrots and crows, a squirrel, lizards, ants. Life will come again to the beautiful canyons so many love and enjoy. And we have our memories.

Also see: Steve Clark's description of the outing plus many photos on CORBA's blog.