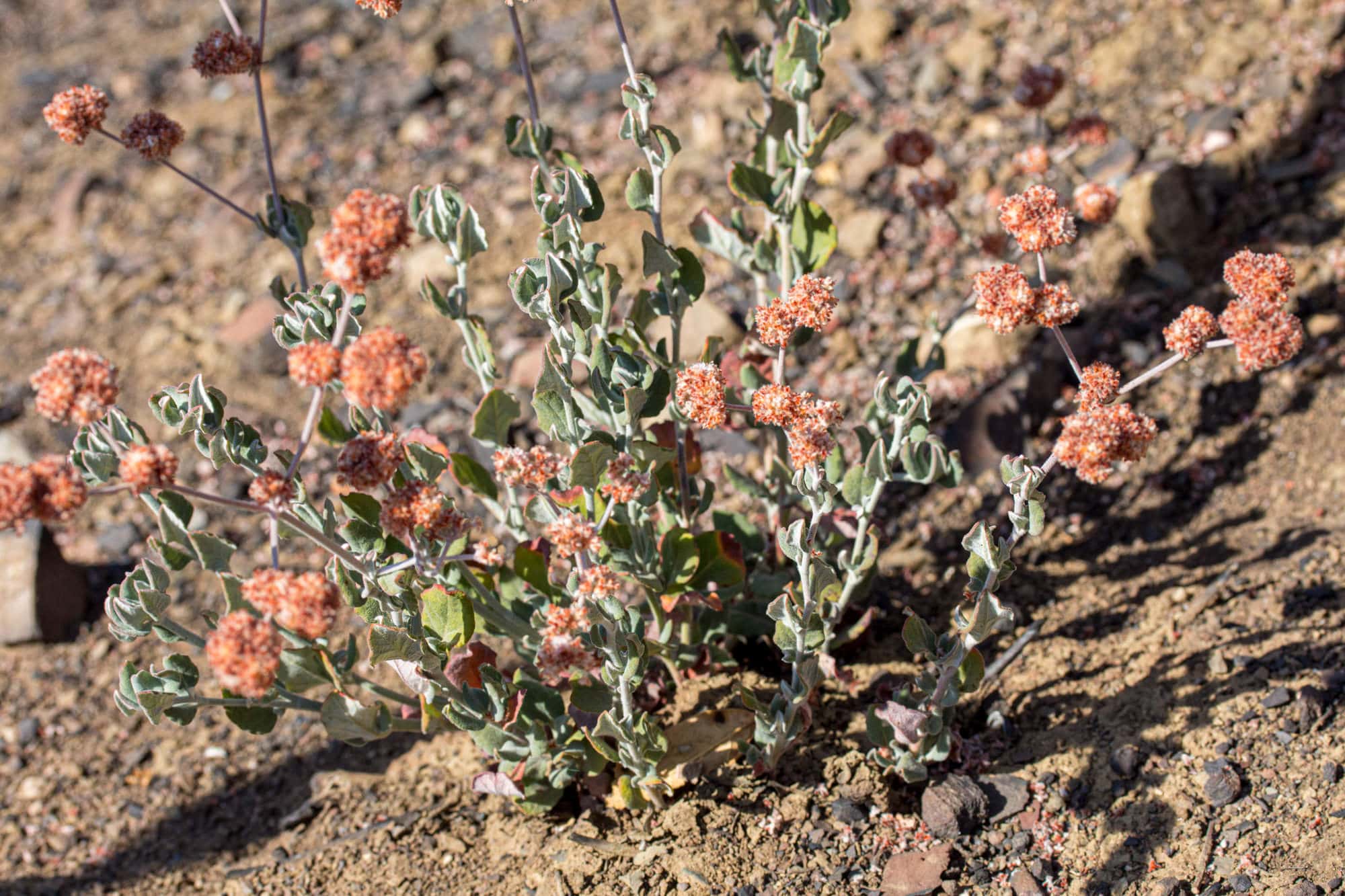 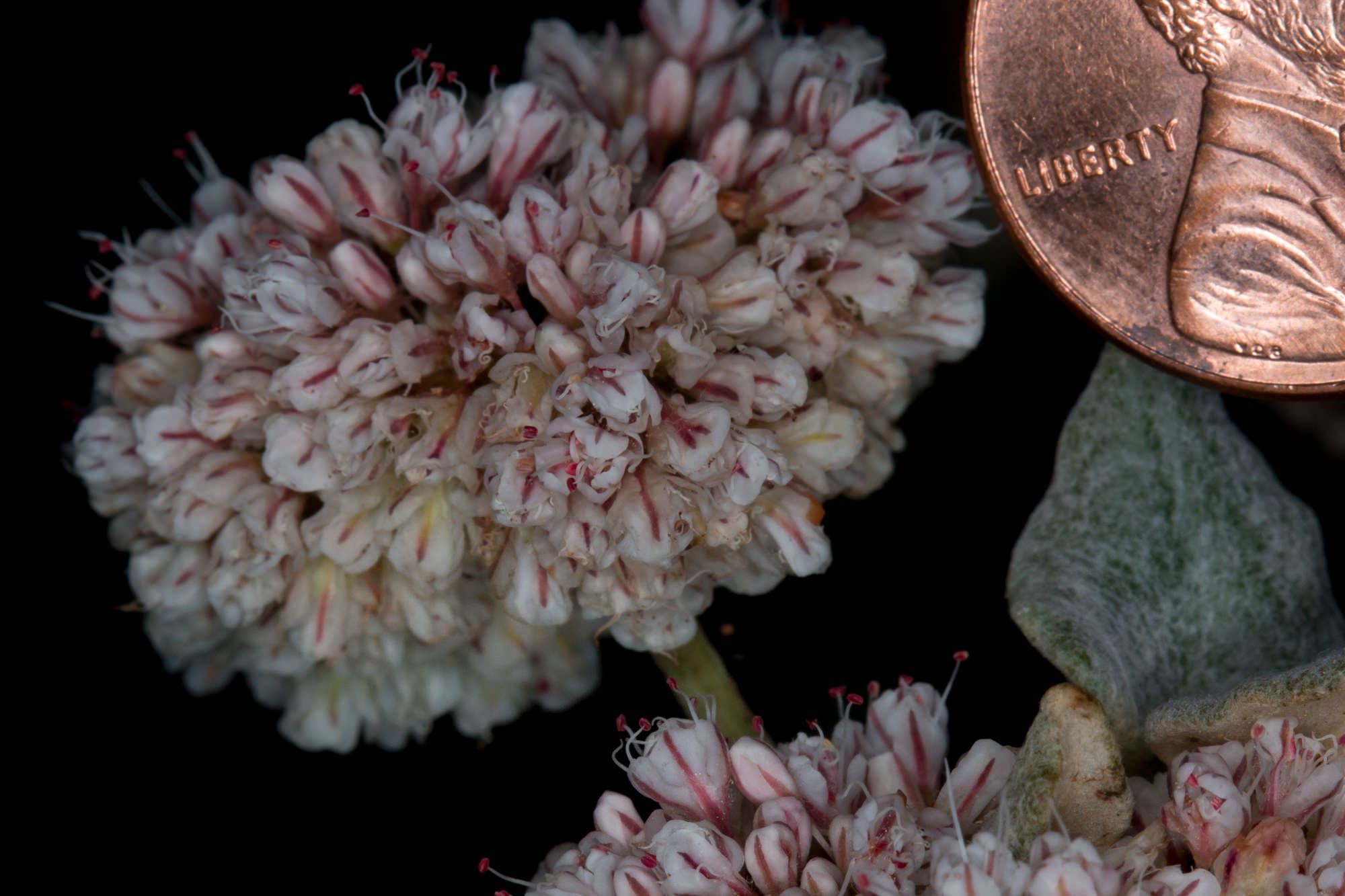 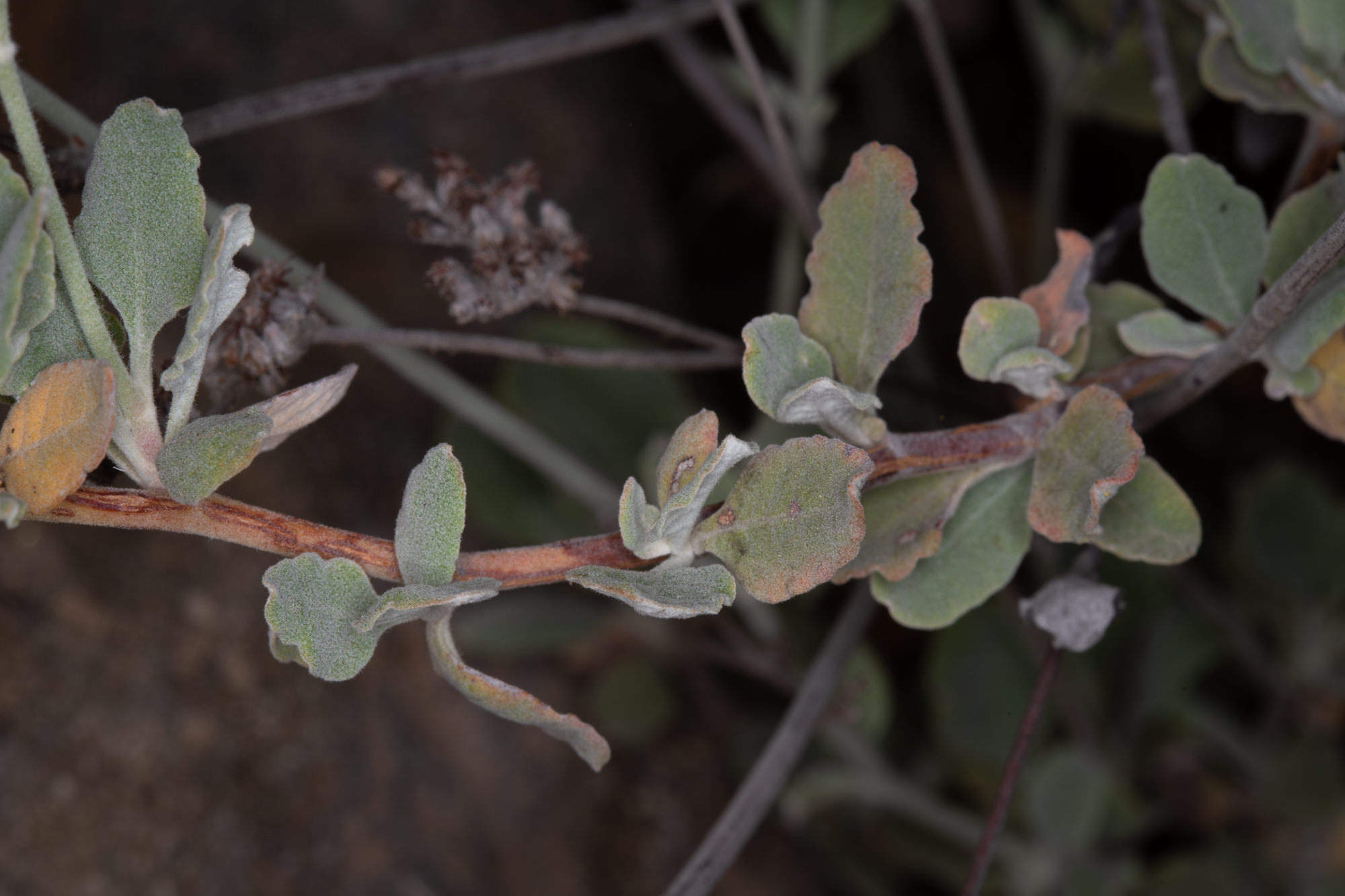 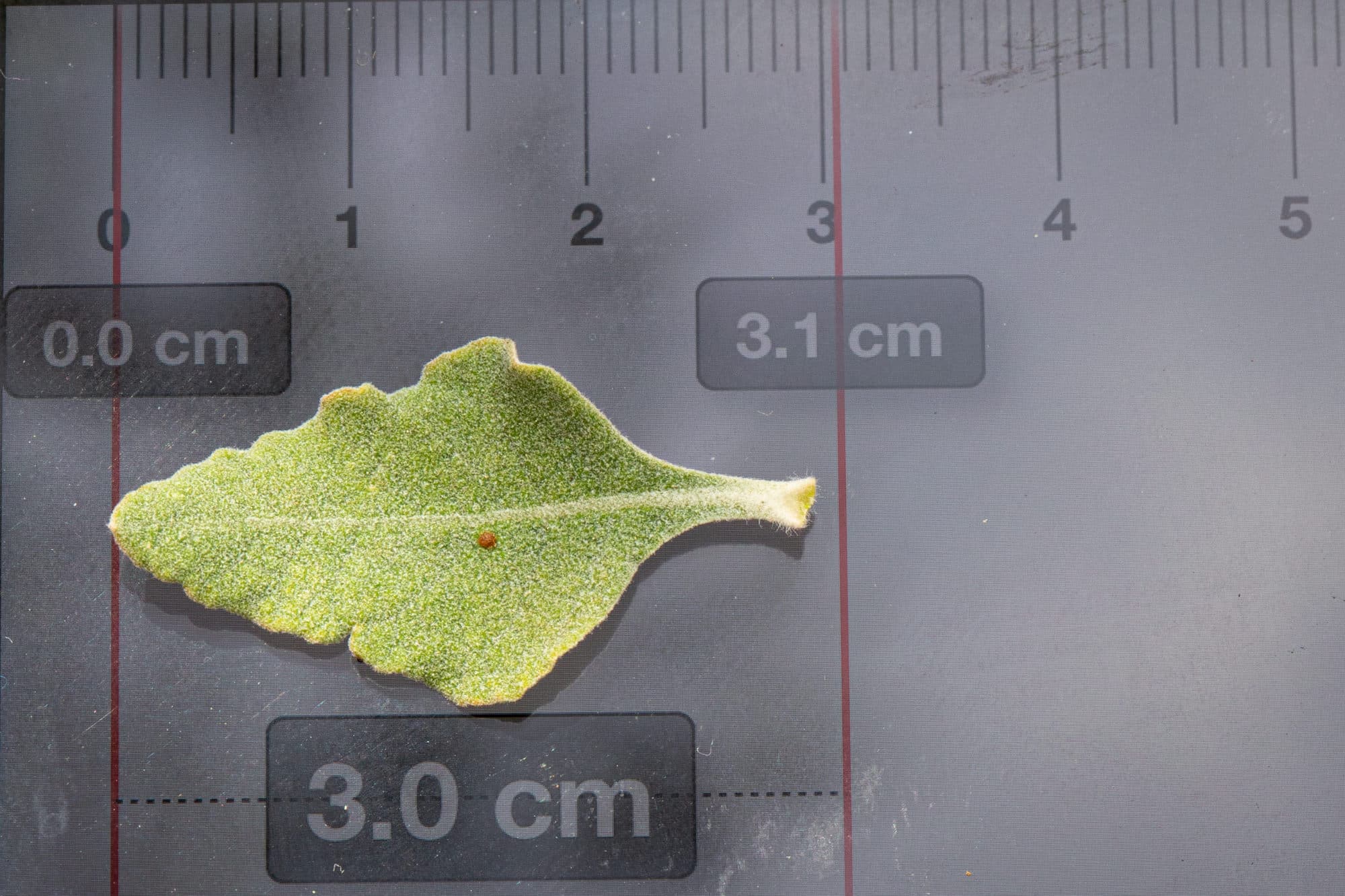 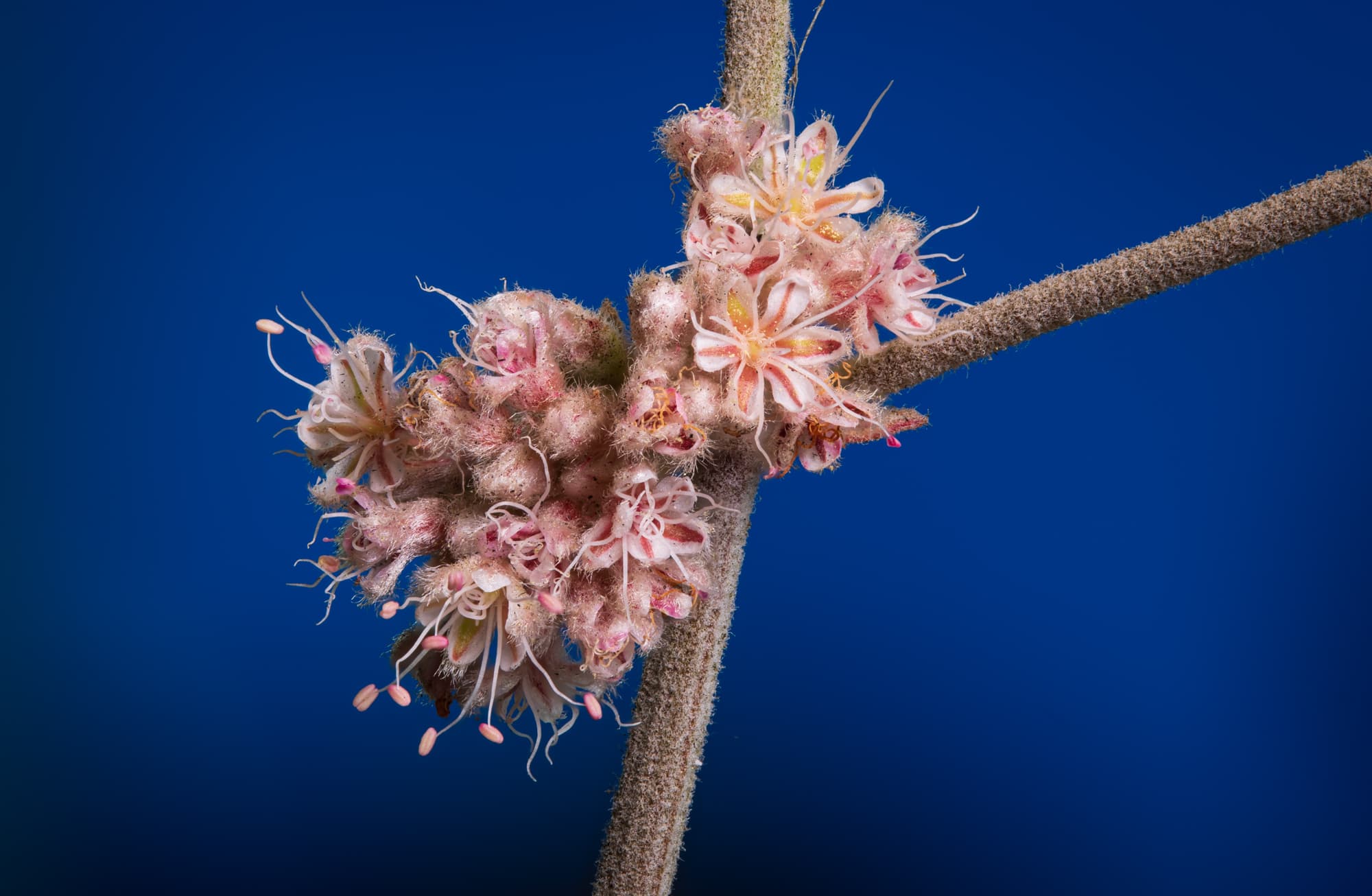 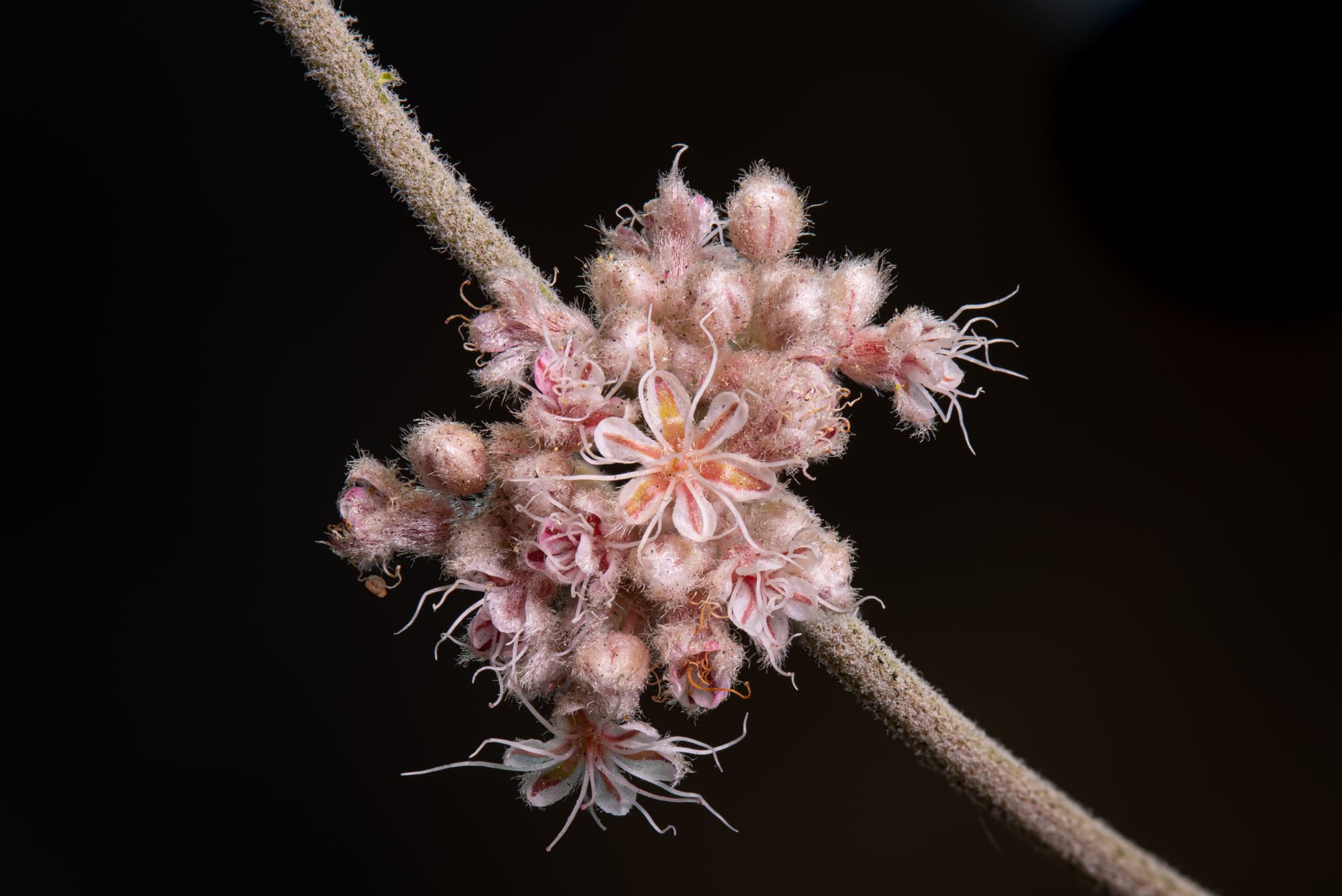 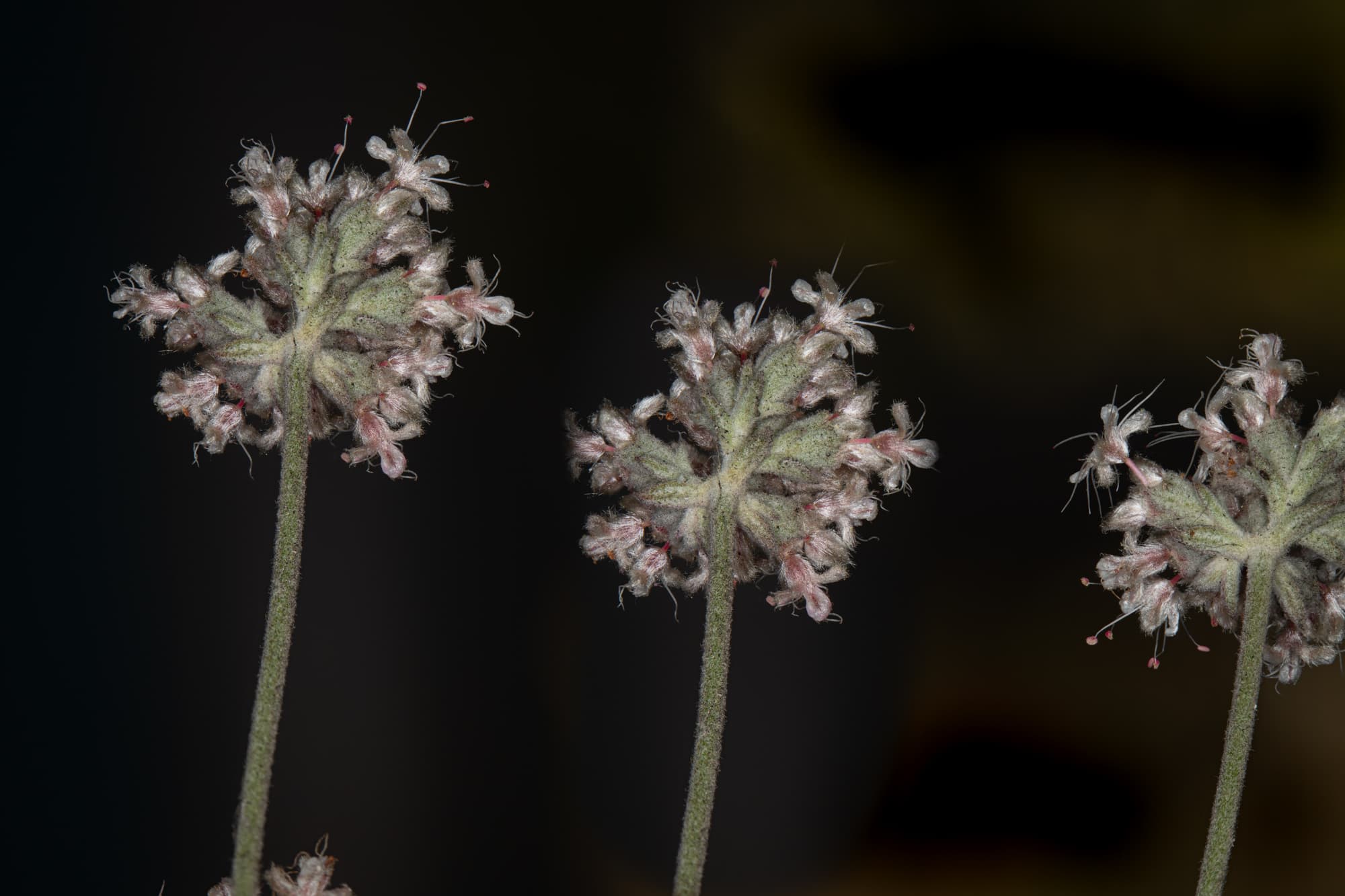 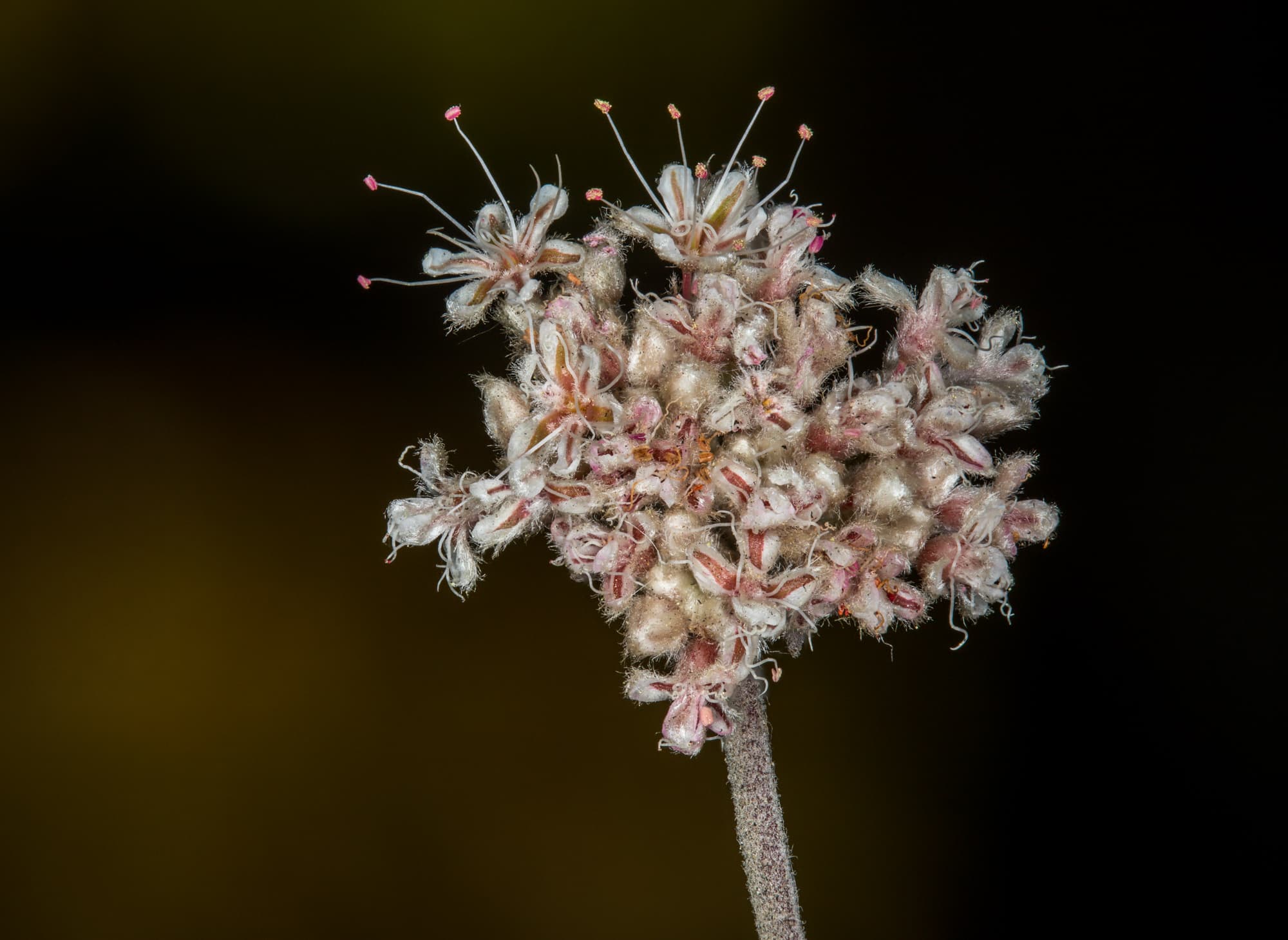 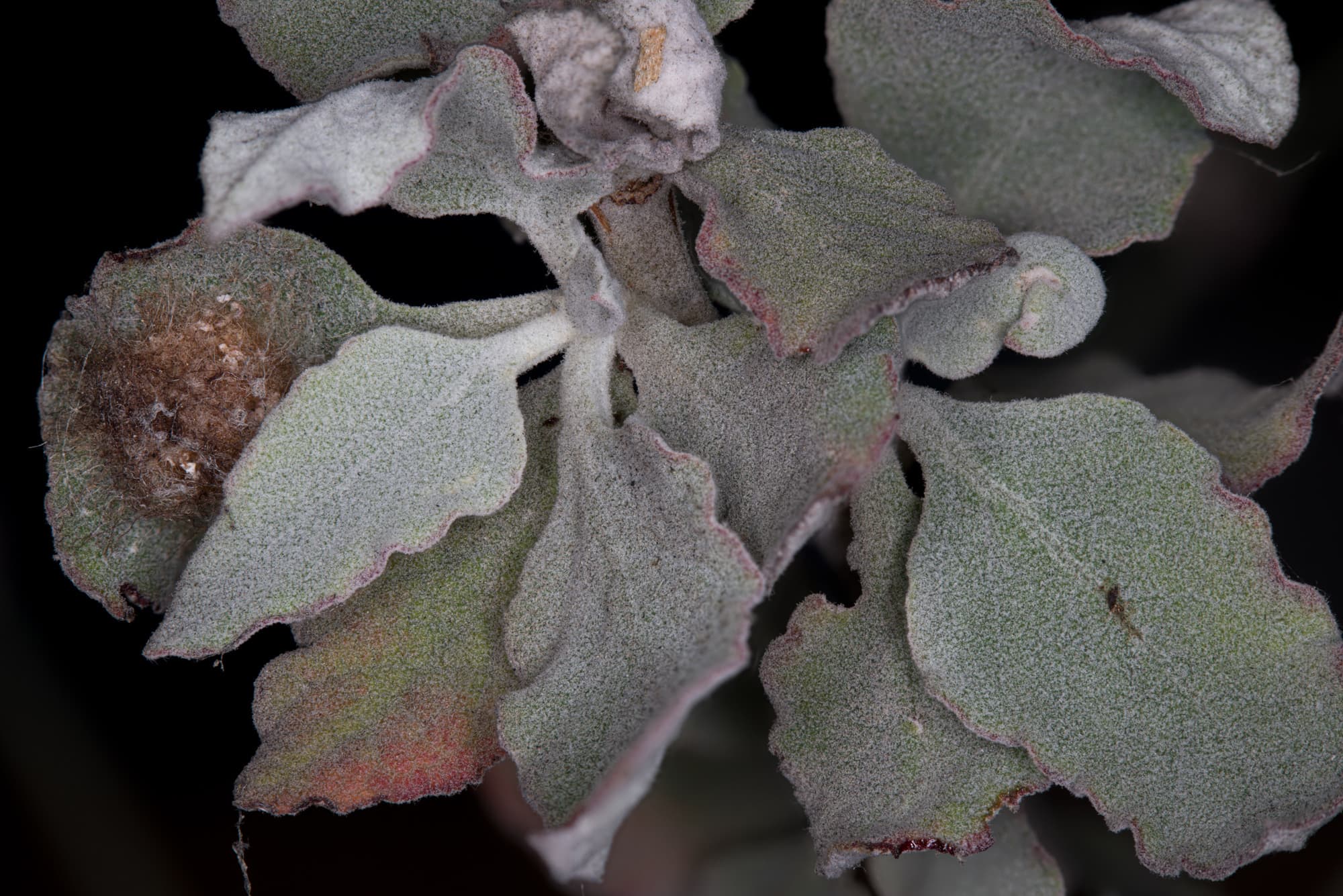 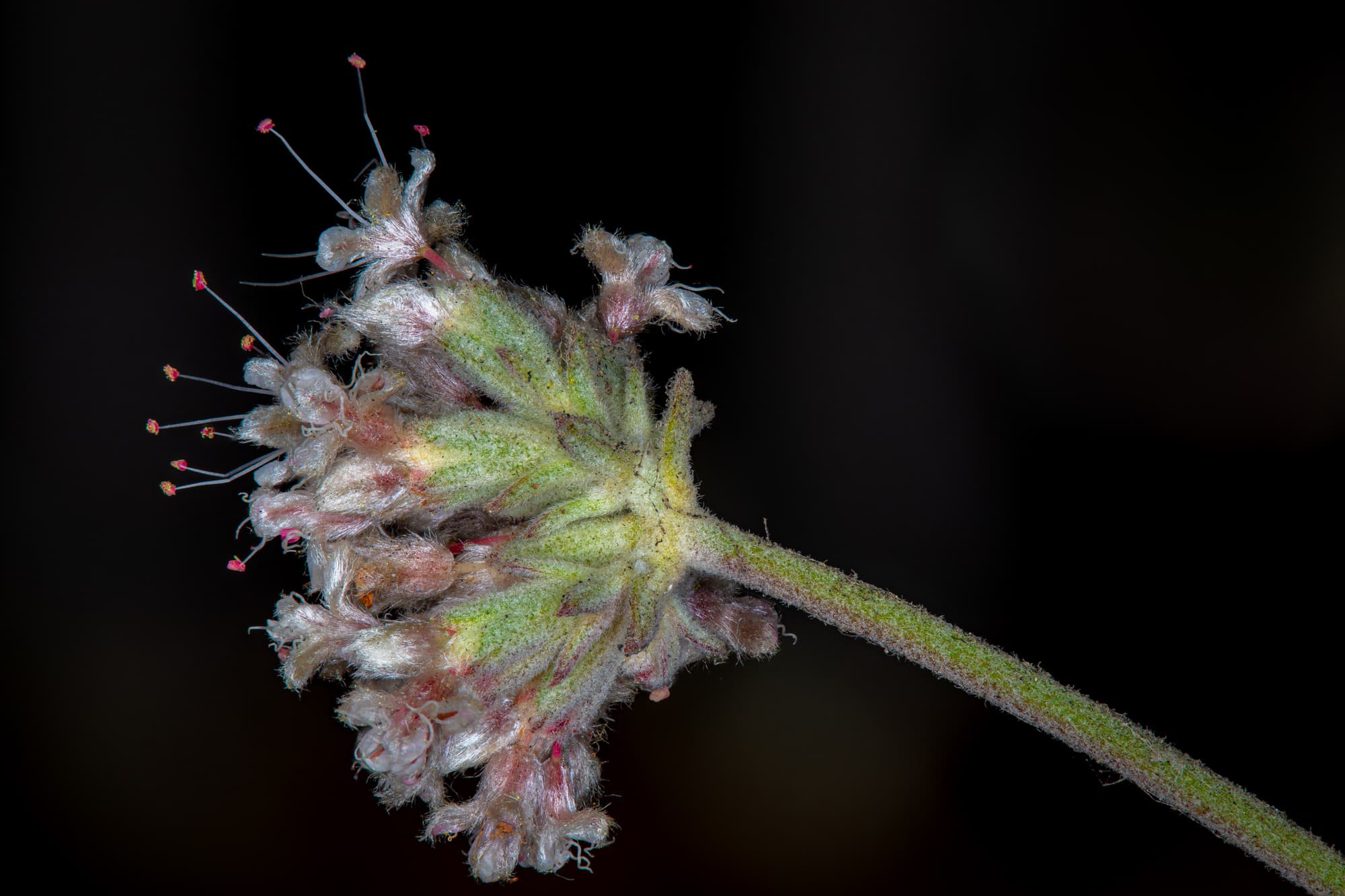 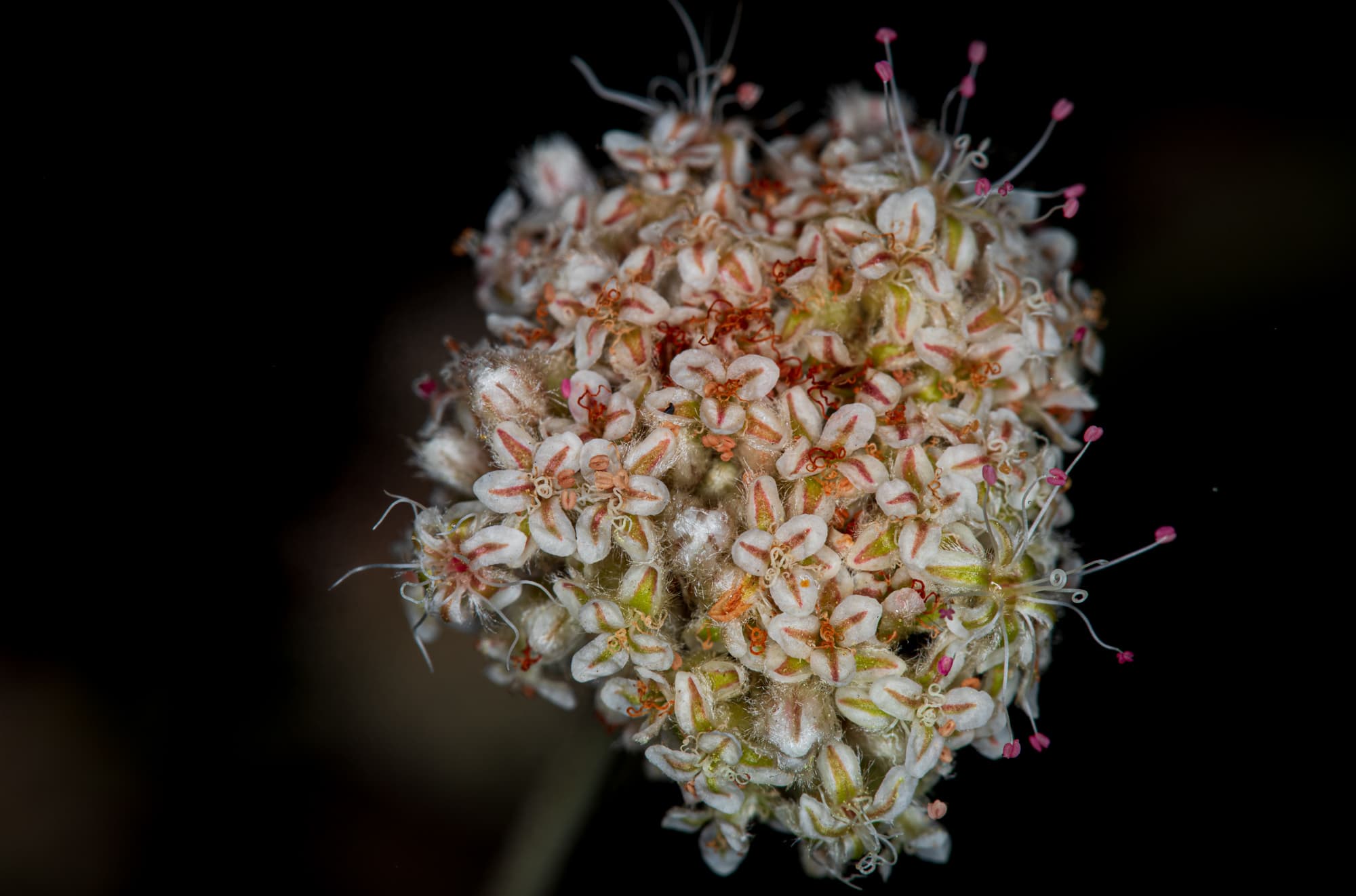 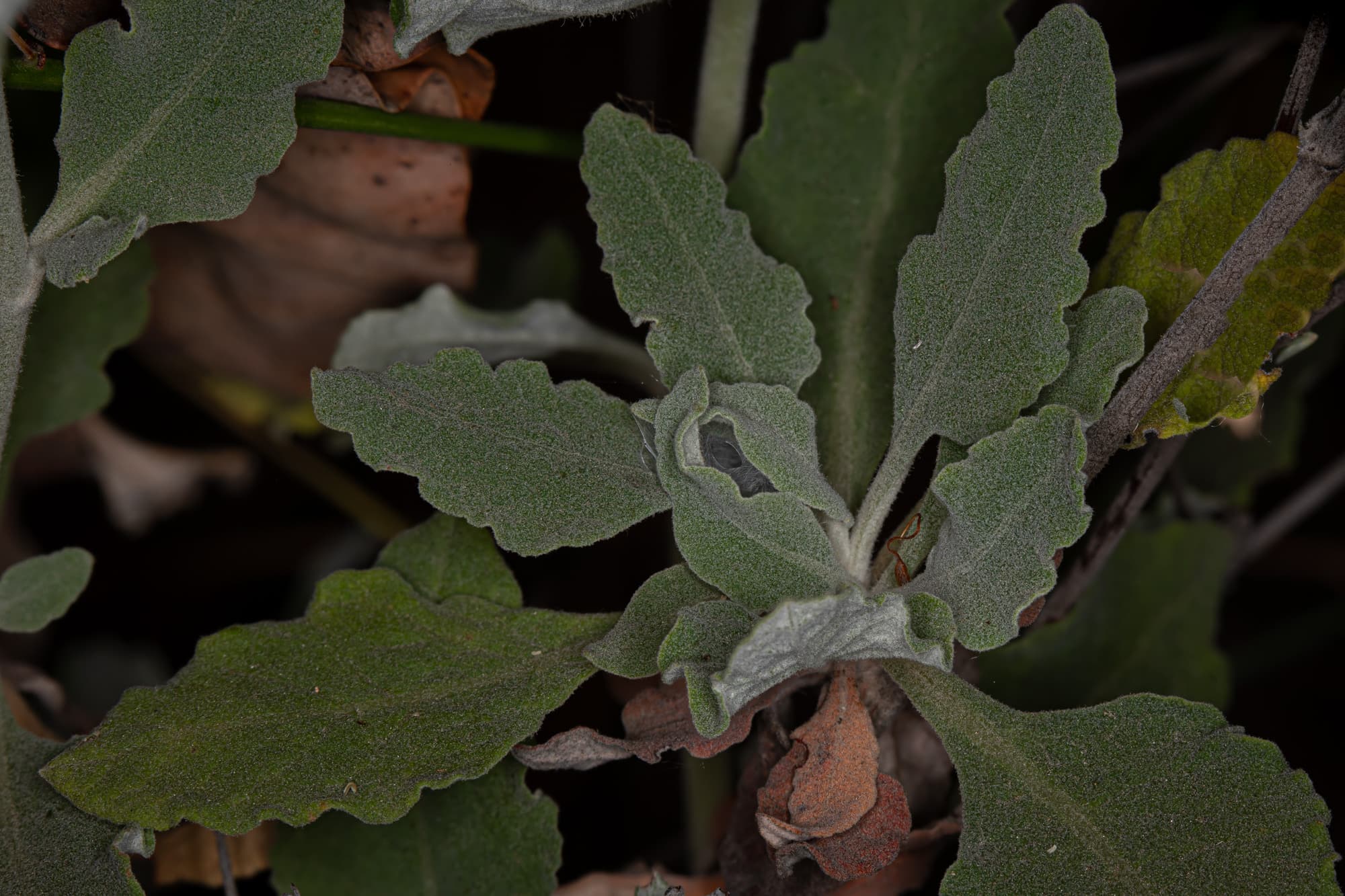 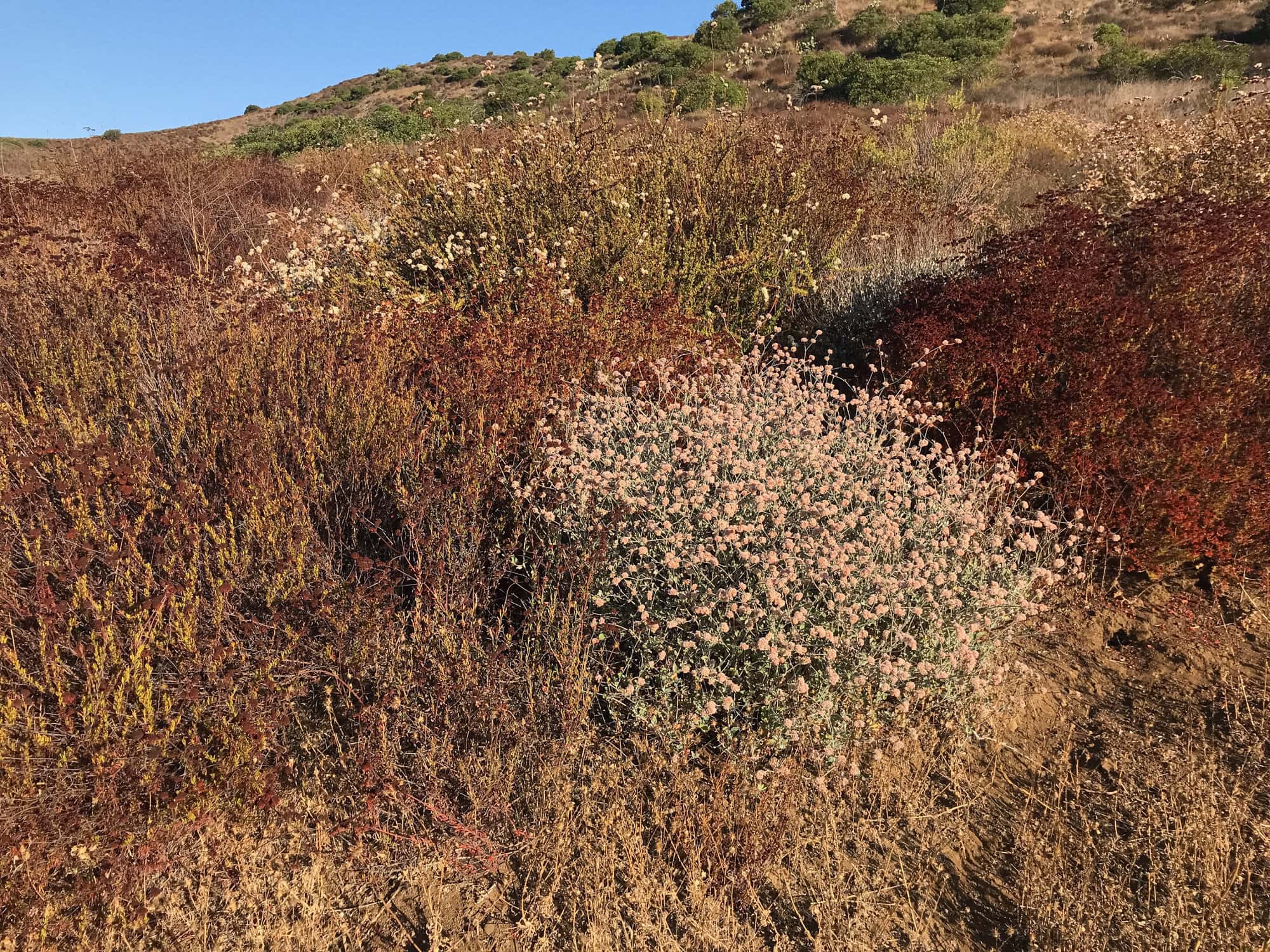 Ashy Leaf Buckwheat — Eriogonum cinereum is an endemic (only in California) perennial found mostly south of Santa Barbara, where it grows on beaches and bluffs and in coastal scrub and chaparral. This plant may reach up over a meter in height and width and is light silvery gray in color due to the woolly hairs on its stems and foliage. The leaves are wavy-edged ovals one to three centimeters long. The rounded flower clusters appear at each fork, each with one to several heads of tiny tightly packed flowers that are mostly light brownish-pink in color and quite hairy. After the flowers have bloomed they assume a color that can be best described as ‘rust’. This plant blooms in summer and is often abuzz with bees, winged insects and butterflies during that time.

The flower heads contain numerous flowers having six tepals (no petals), nine stamens and has both male and female plants. Flowers are small enough to require a hand lens to see the details.

Eriogonum, from the Polygonaceae or Buckwheat family, is one of the larger genuses in California with over 125 species, including annual forms and shrubs. Buckwheats occupy many plant communities from the beaches to the mountains to the deserts. The flowers are often similar in color and appearance. You are likely one of the 98% of people who can walk by this plant and when asked to identify it — simply say “buckwheat”. A quick glance over at California Buckwheat Eriogonum fasciculatum var. foliolosum and then back to this plant may reveal no differences — unless you look at the leaves. One plant has bundles of mostly green narrow leaves and the other has grayish oval shaped leaves. For your effort at looking at the leaves, you can add one more plant that you can identify!

Eriogonum – from the Greek erion, "wool," and gonu, "joint or knee," in reference to the hairy or woolly joints of some of the species of the genus. Michaux's description of the plant in his publication of 1803 was based on a single species because that was all he had. David Hollombe has interpreted his explanation of the name as meaning "both woolly and geniculate, rather than plant with woolly joints."
cinereum – pertaining to ashes