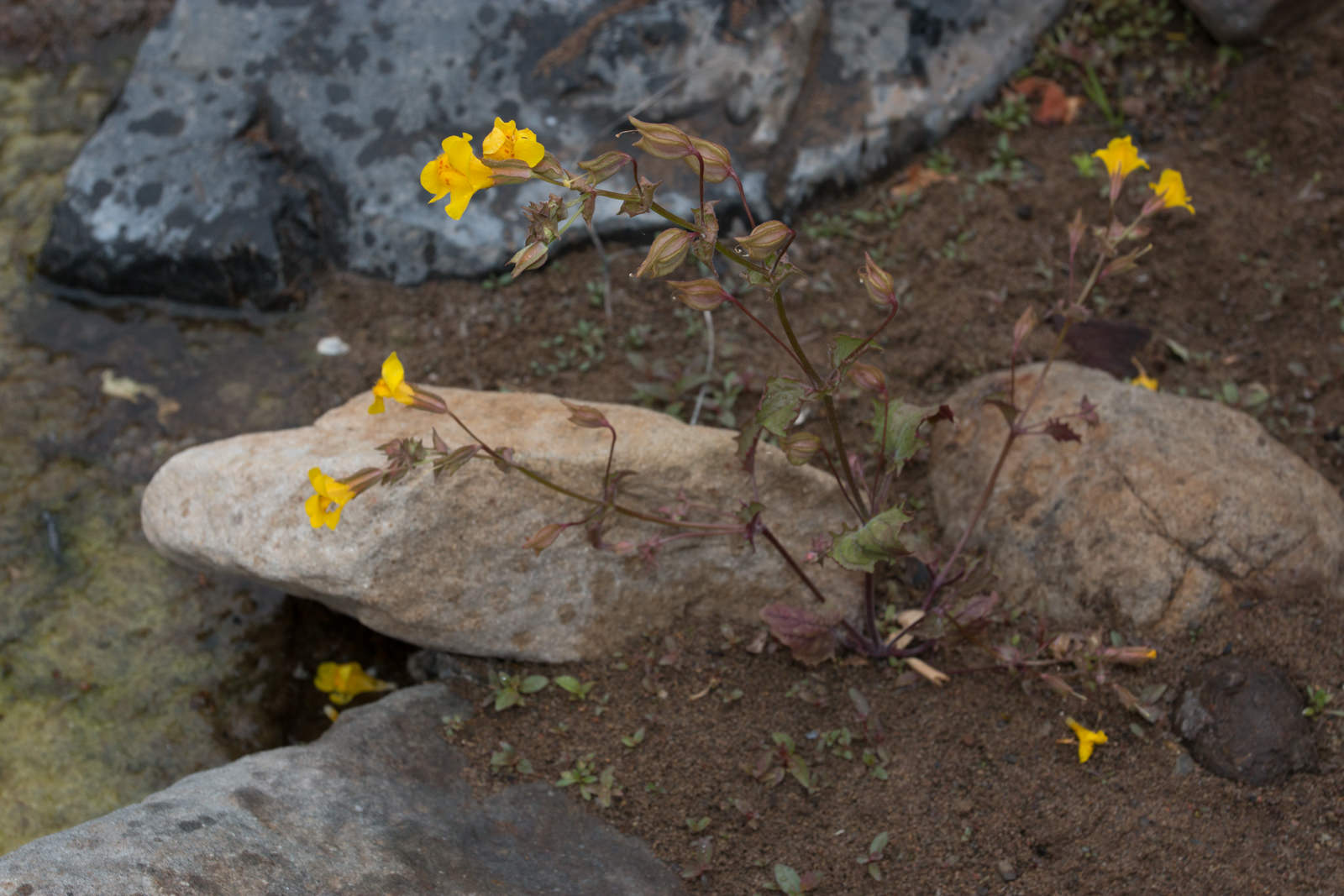 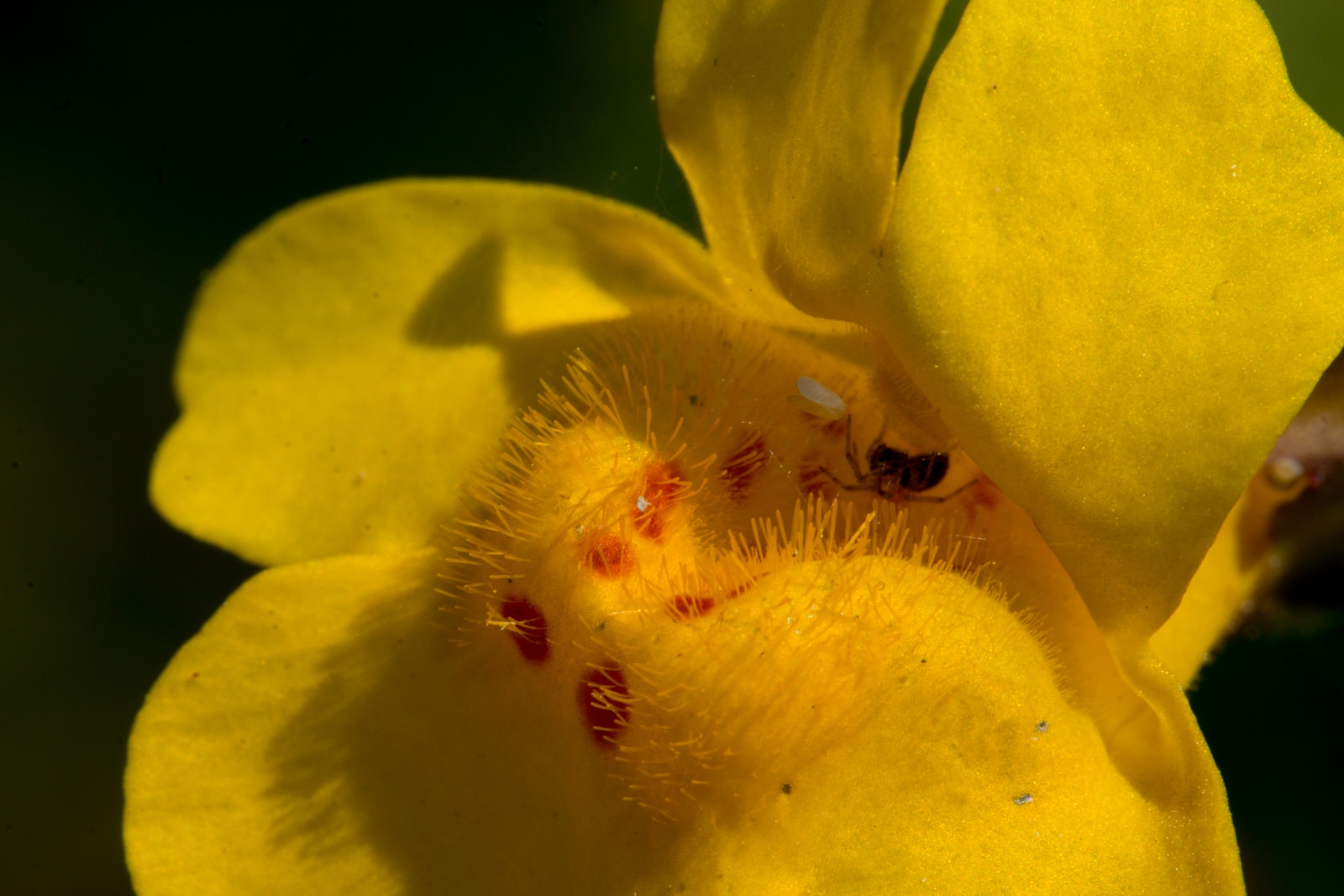 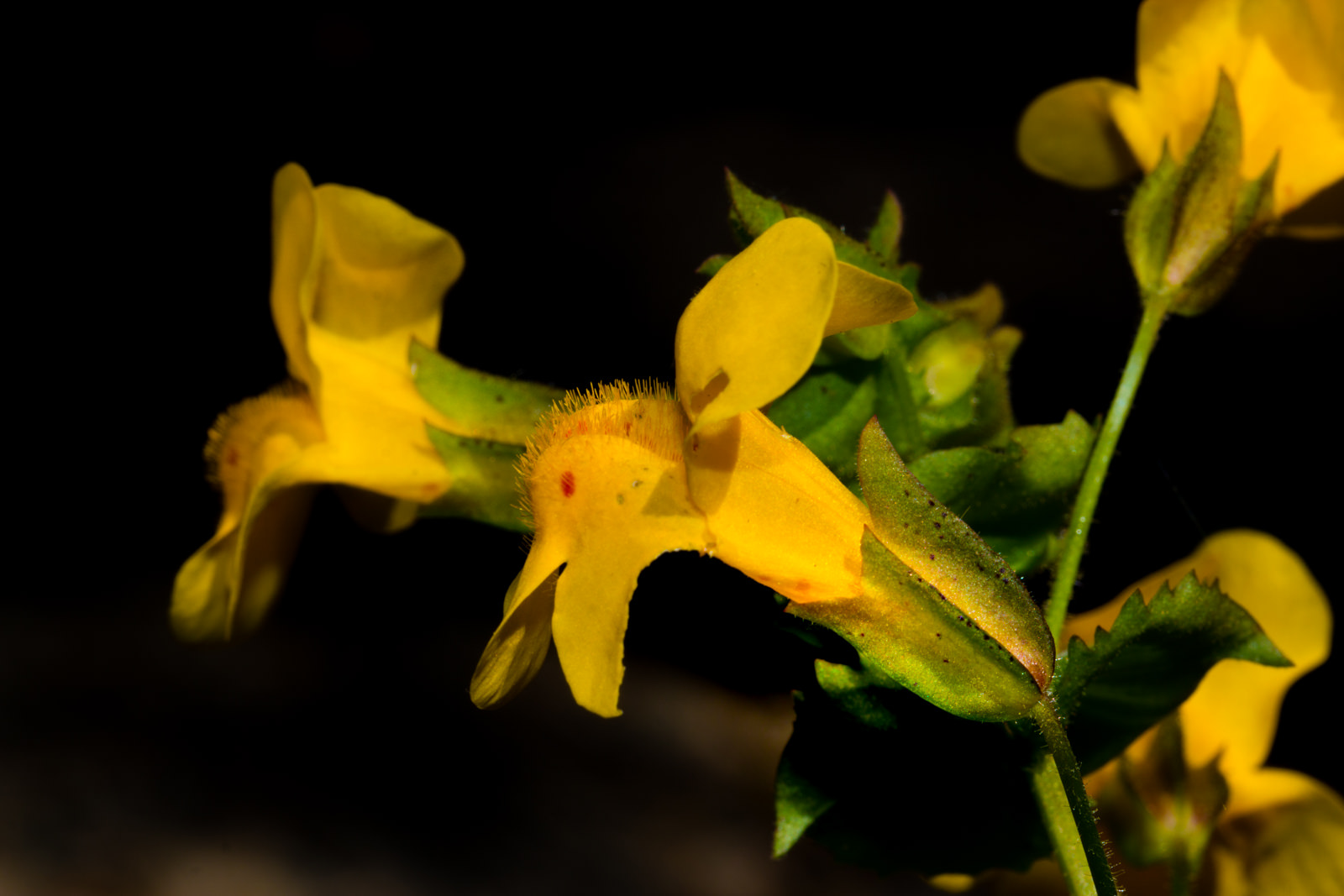 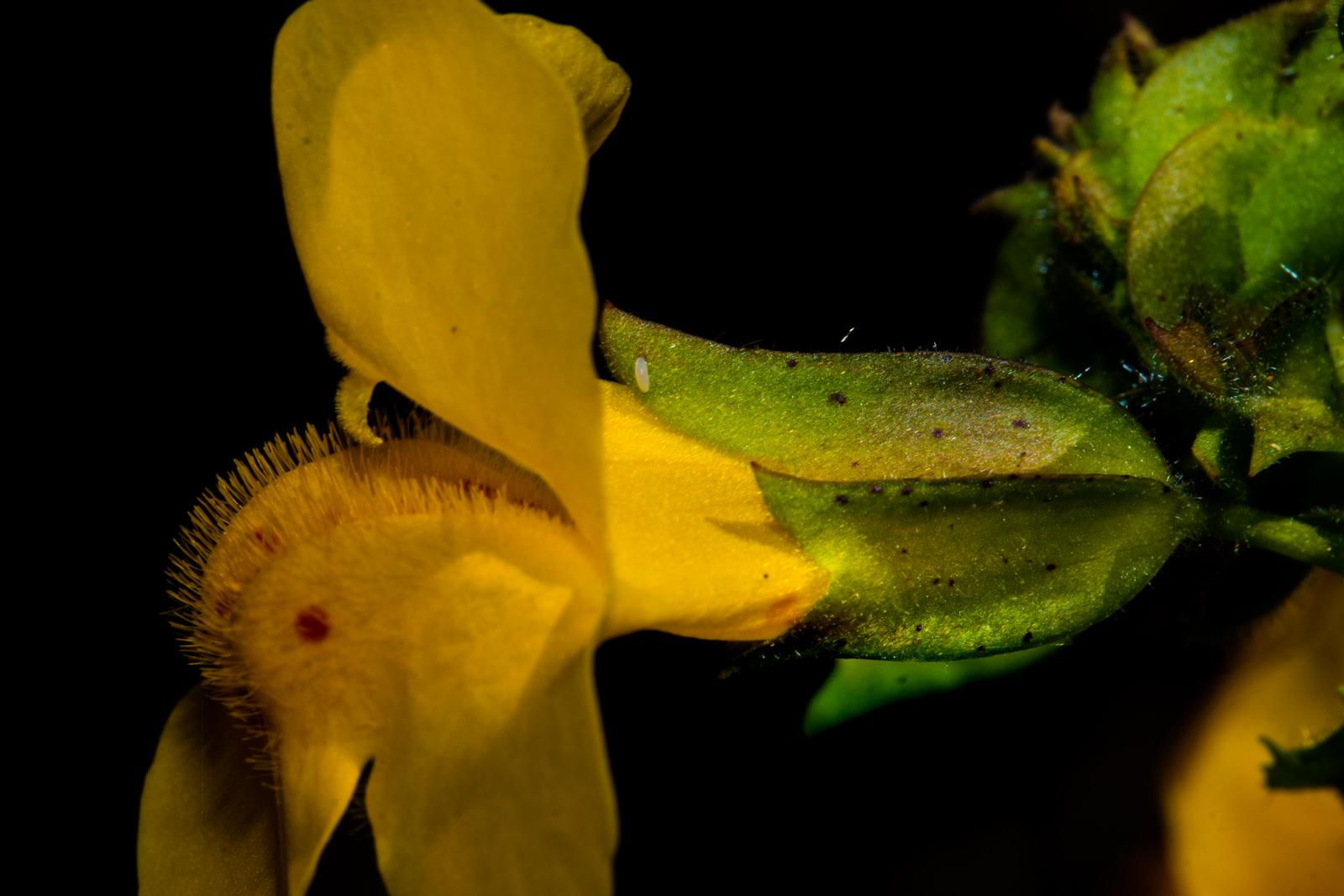 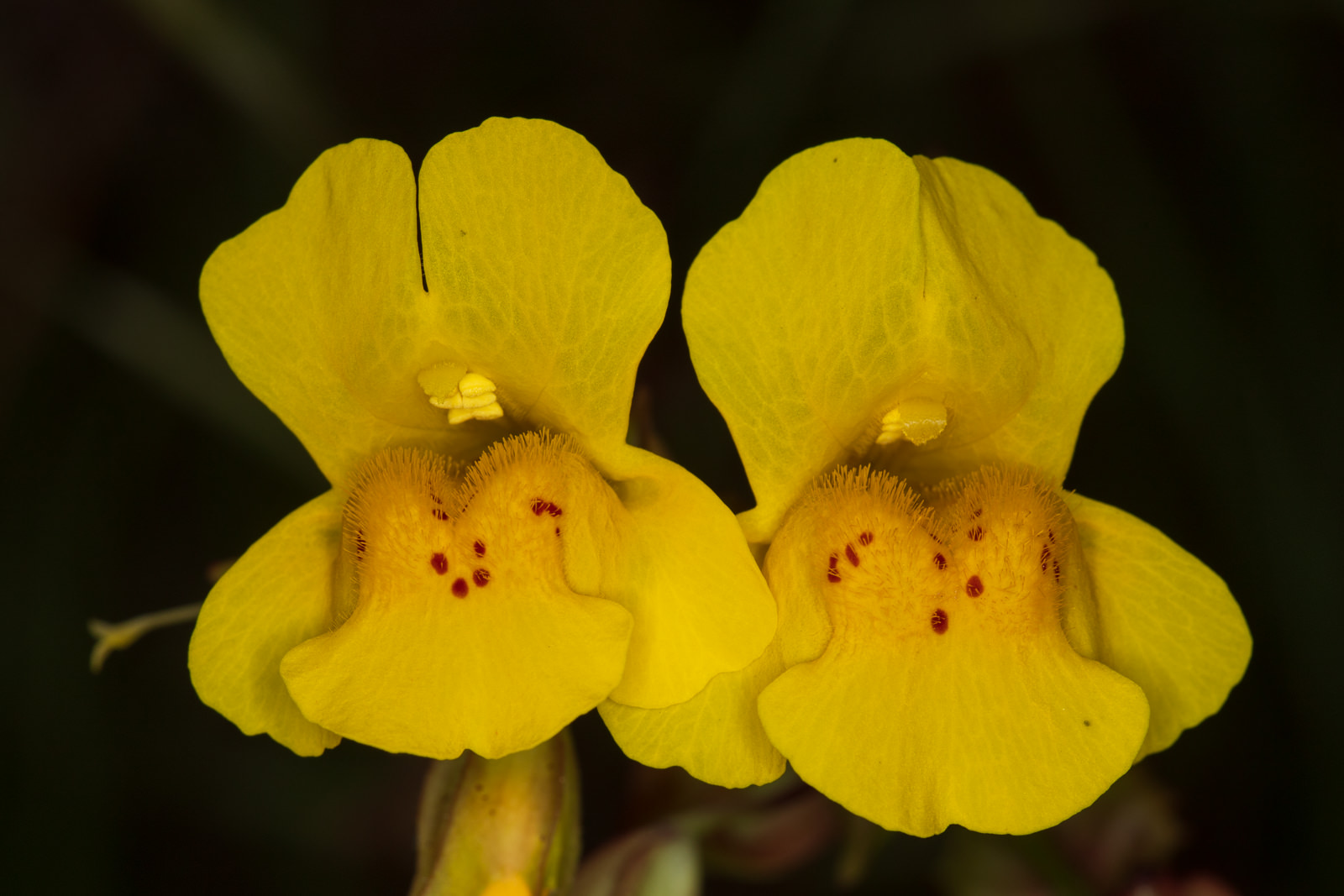 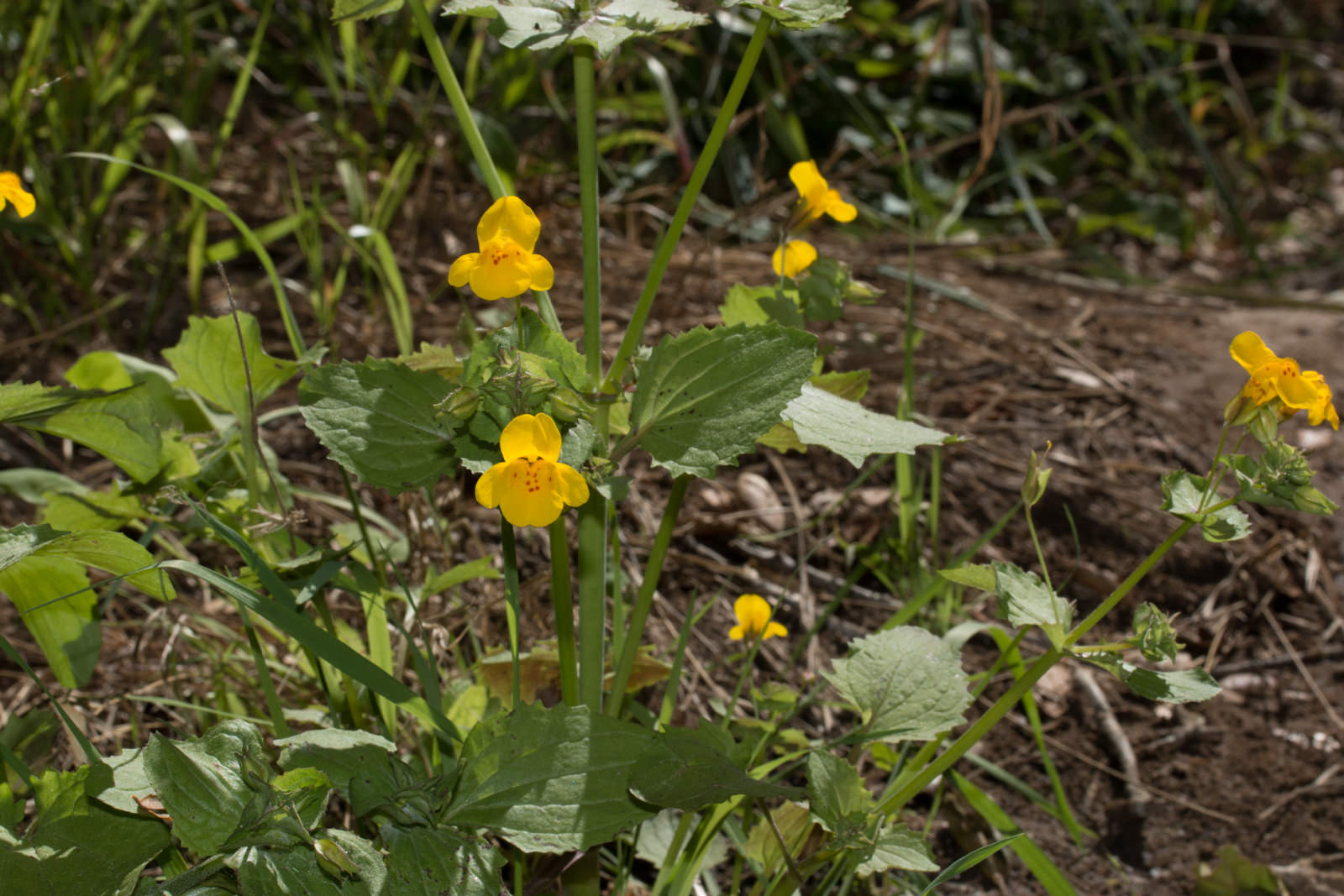 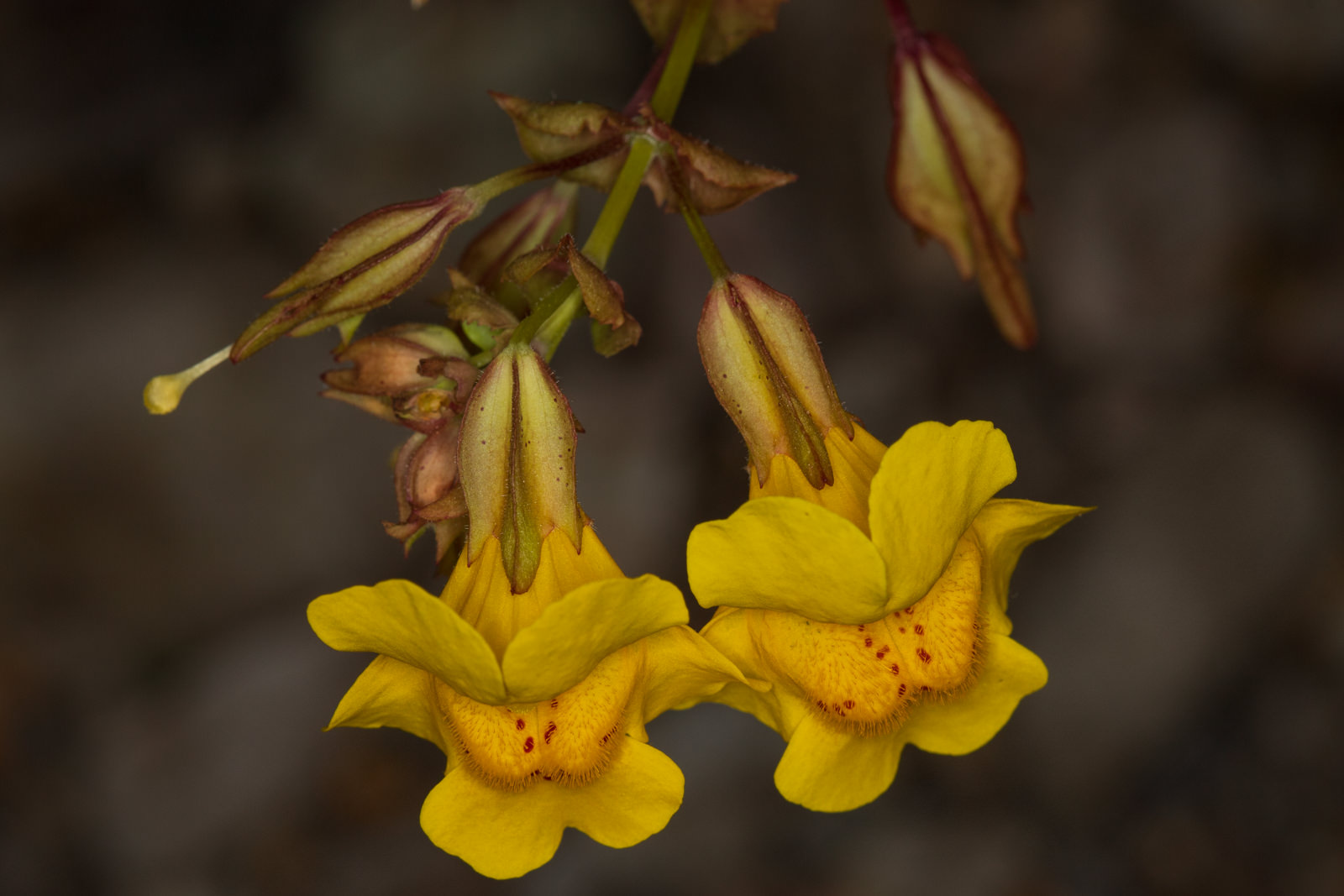 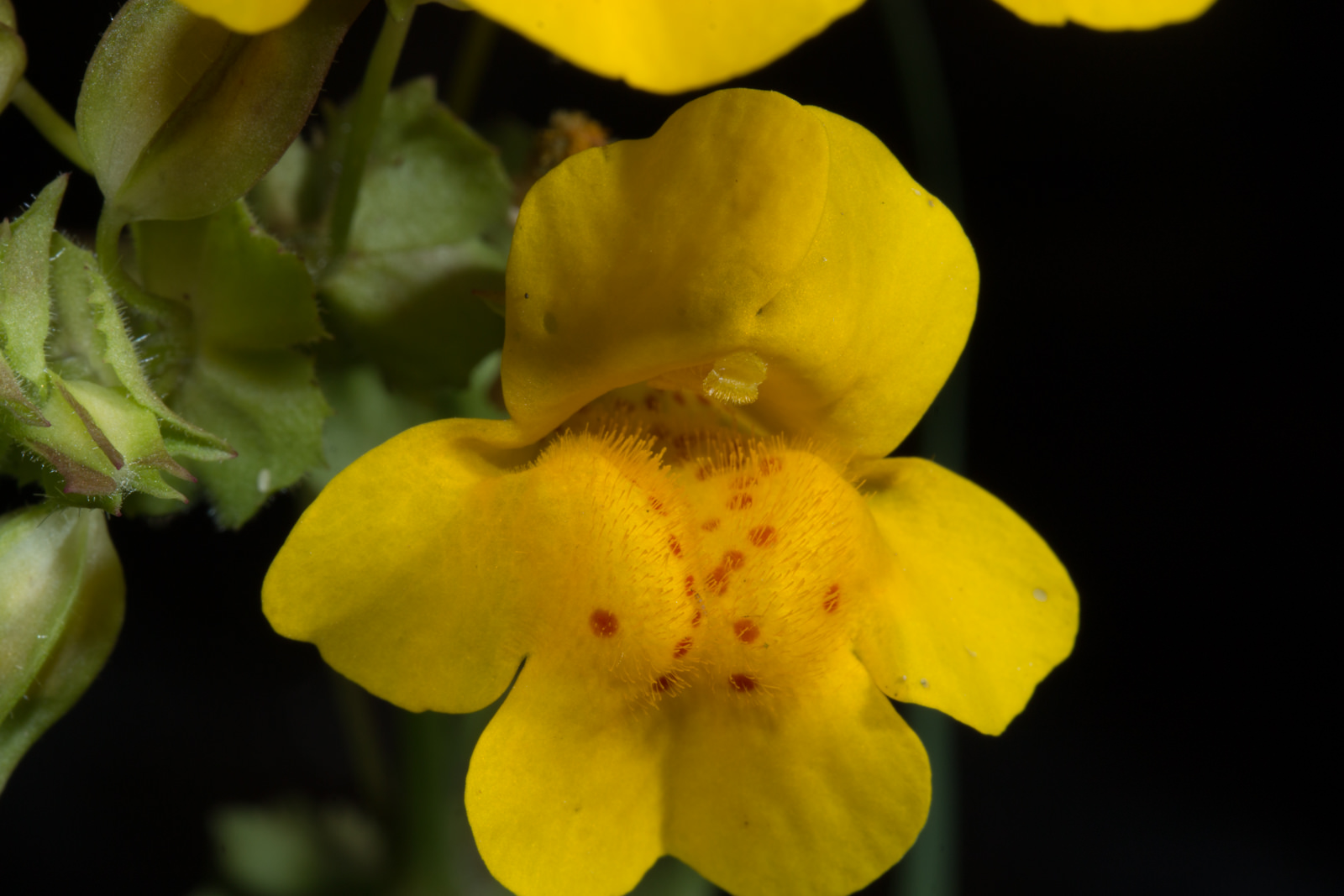 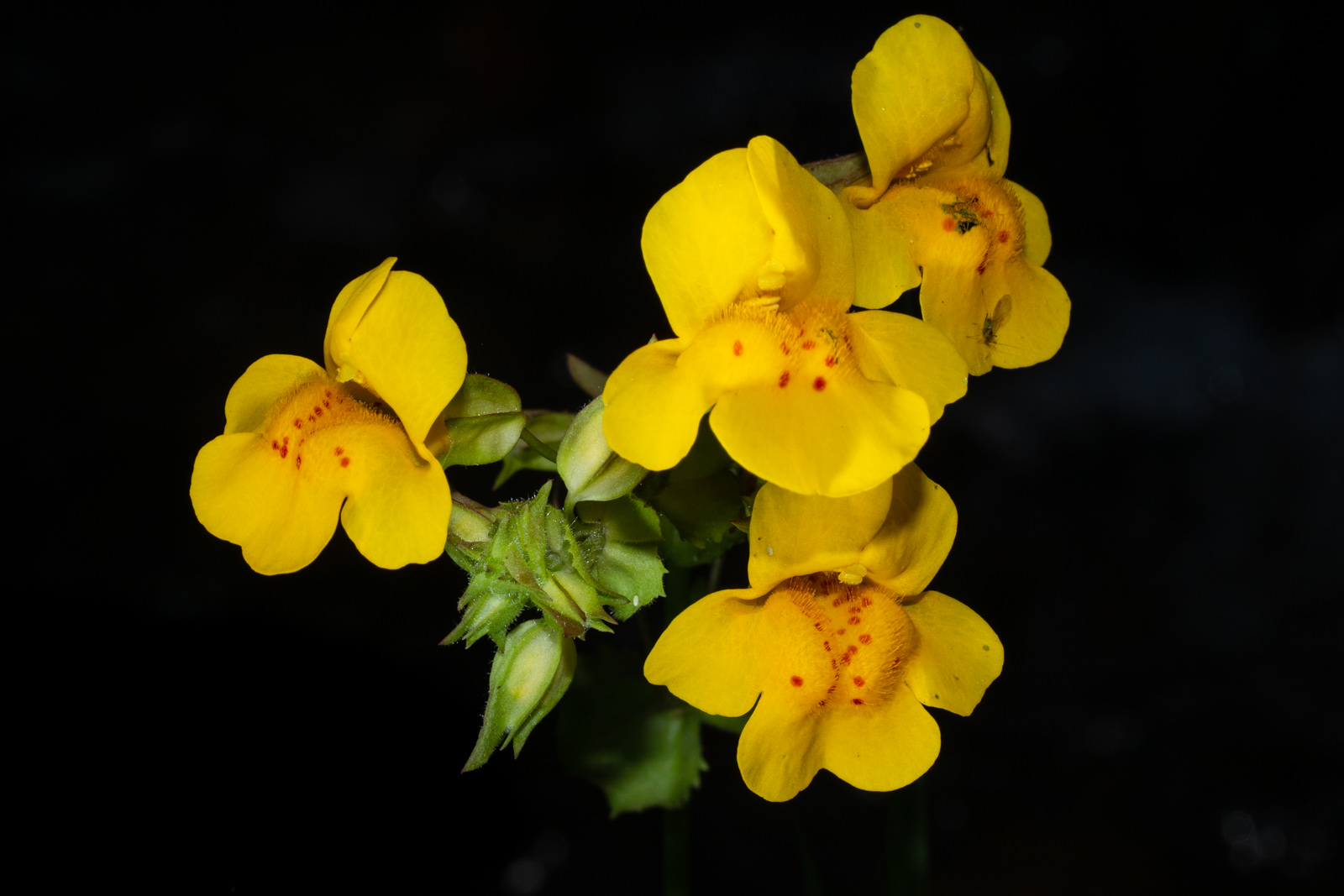 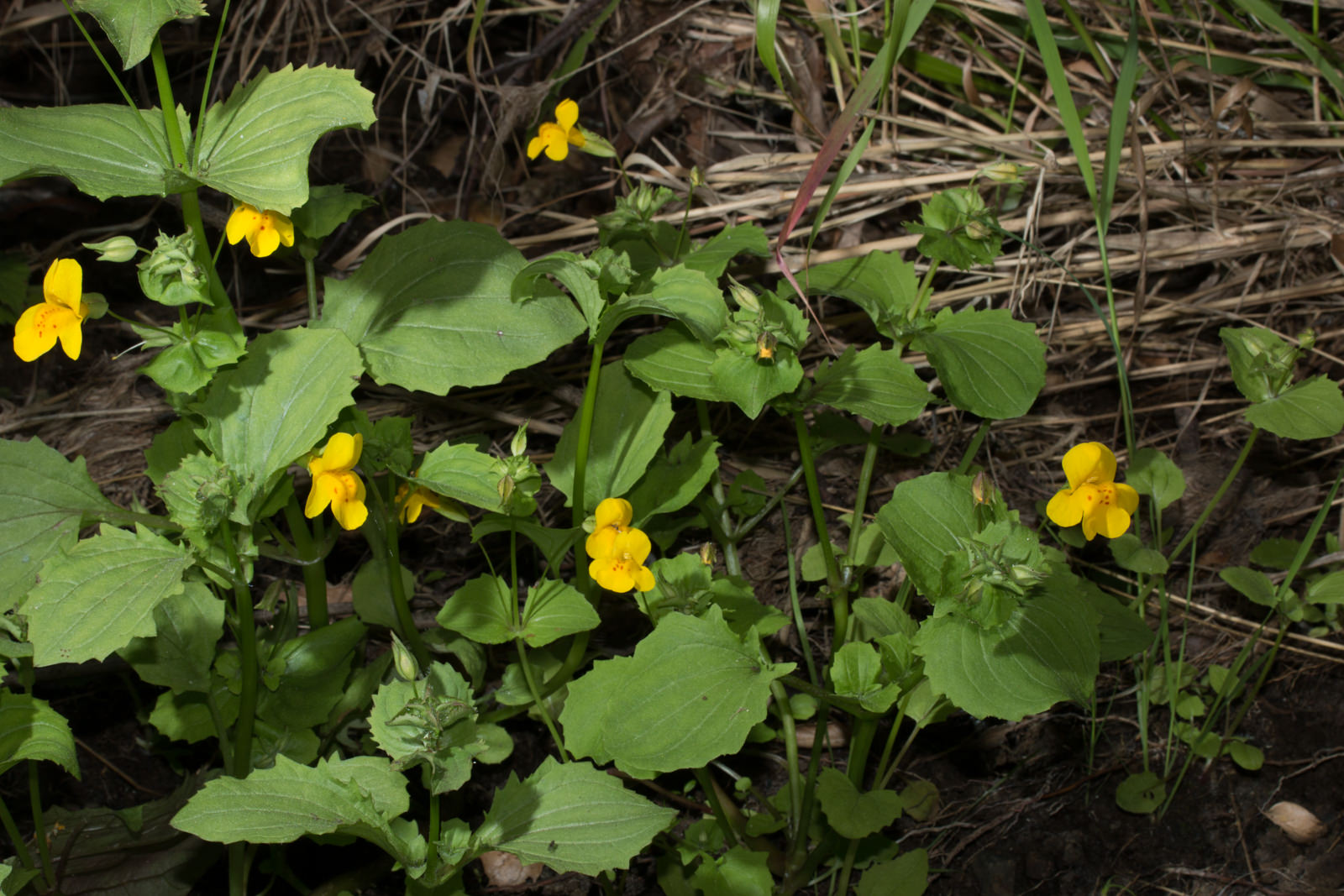 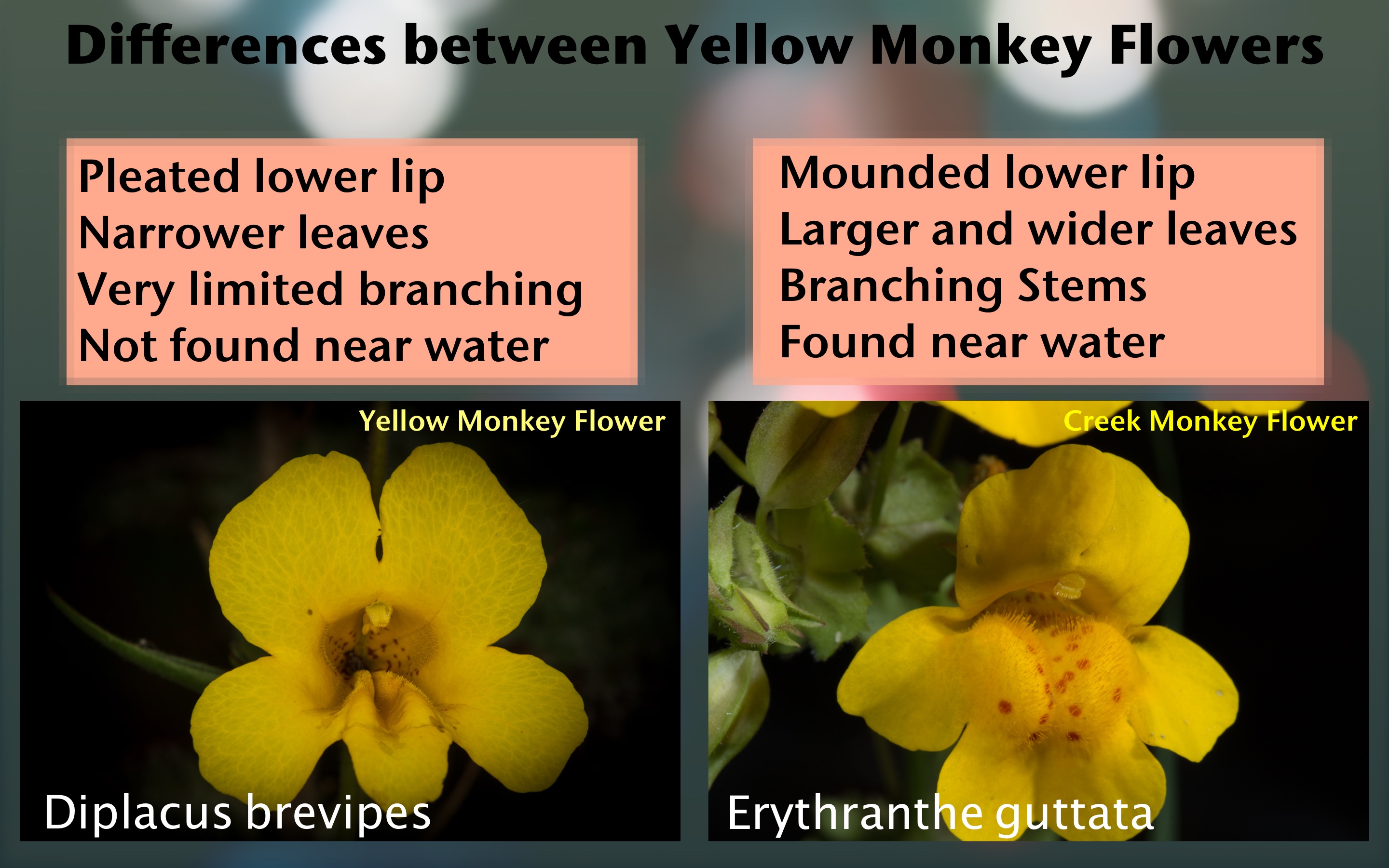 Creek Monkey Flower Erythranthe guttata is always found growing in damp or wet areas from sea level to 12,000 feet throughout western North America. The plant is highly variable plant, taking many forms - Annual or Perennial, tall or short, hairy or not hairy. Erythranthe guttata is usually not more than 30 inches tall and has disproportionately large long, tubular flowers. The perennial form spreads via rhizomes. The stem may be erect or sprawl on the ground. Roots may develop at leaf nodes in the the latter form. Red dots on a rounded pollinator platform indicate that this plant is pollinated by insects versus hummingbirds. This plant is pollinated by bees in the Bombus species.

Leaves are opposite, round to oval, usually coarsely and irregularly toothed or lobed.

The calyx has five lobes that are much shorter than the flower. Each flower has bilateral symmetry and has two lips. The upper lip usually has two lobes; the lower, three. The lower lip may have one large to many small red to reddish brown spots. The opening to the flower is hairy.The bright yellow flowers are born on a flower cluster with the separate flowers attached by short equal stalks at equal distances along a central stem. The flowers at the base of the central stem develop first, most often with five or more flowers.

Link to Calfora.net - the best source of this fascinating information! Name Origin: Erythranthe: : from Greek erythros, "red," and anthos, "flower," the only species in this genus when it was first published in 1840 by Édouard Spach being Erythranthe (Mimulus) cardinalis. (ref. genus Erythranthe) guttata/guttatus: from the Latin meaning "a drop-like spot" which describes the red dots on both petals and sepals.