Plant of the Month - Holly-Leaved Cherry 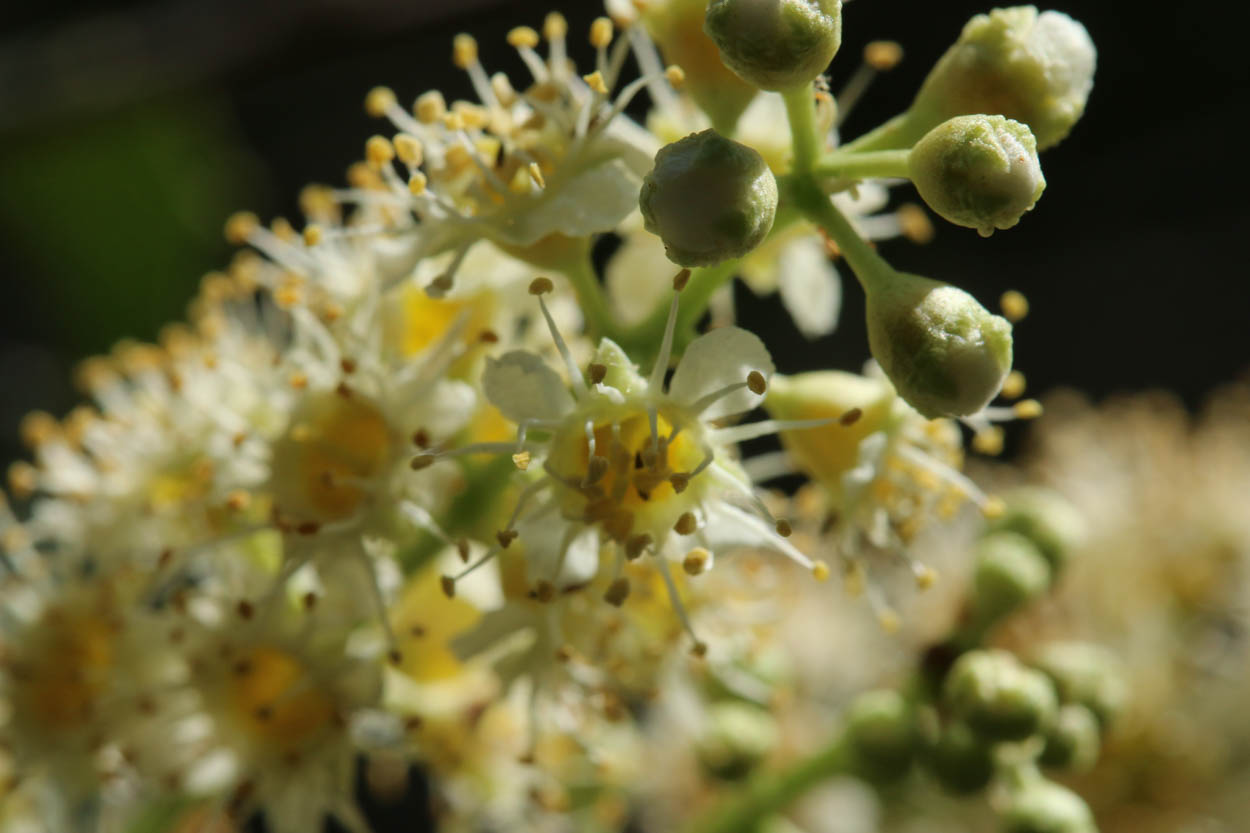 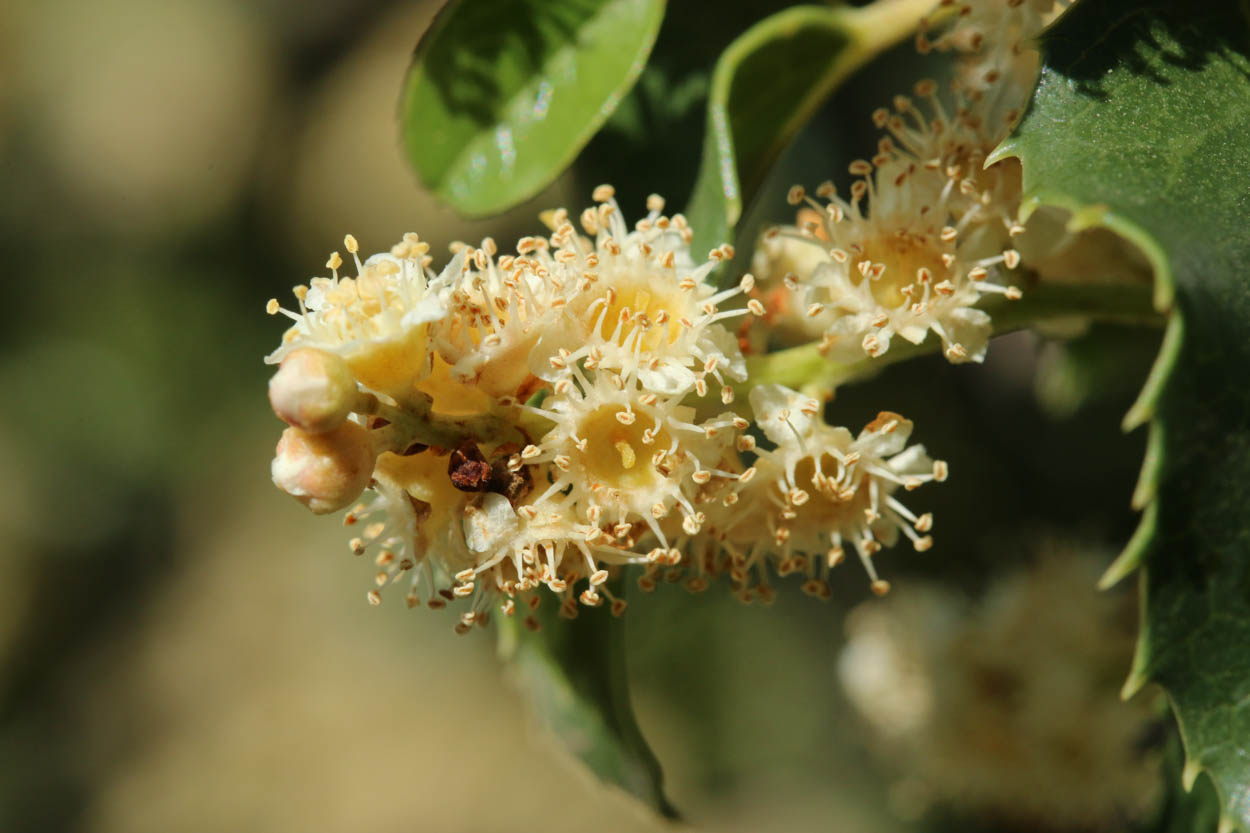 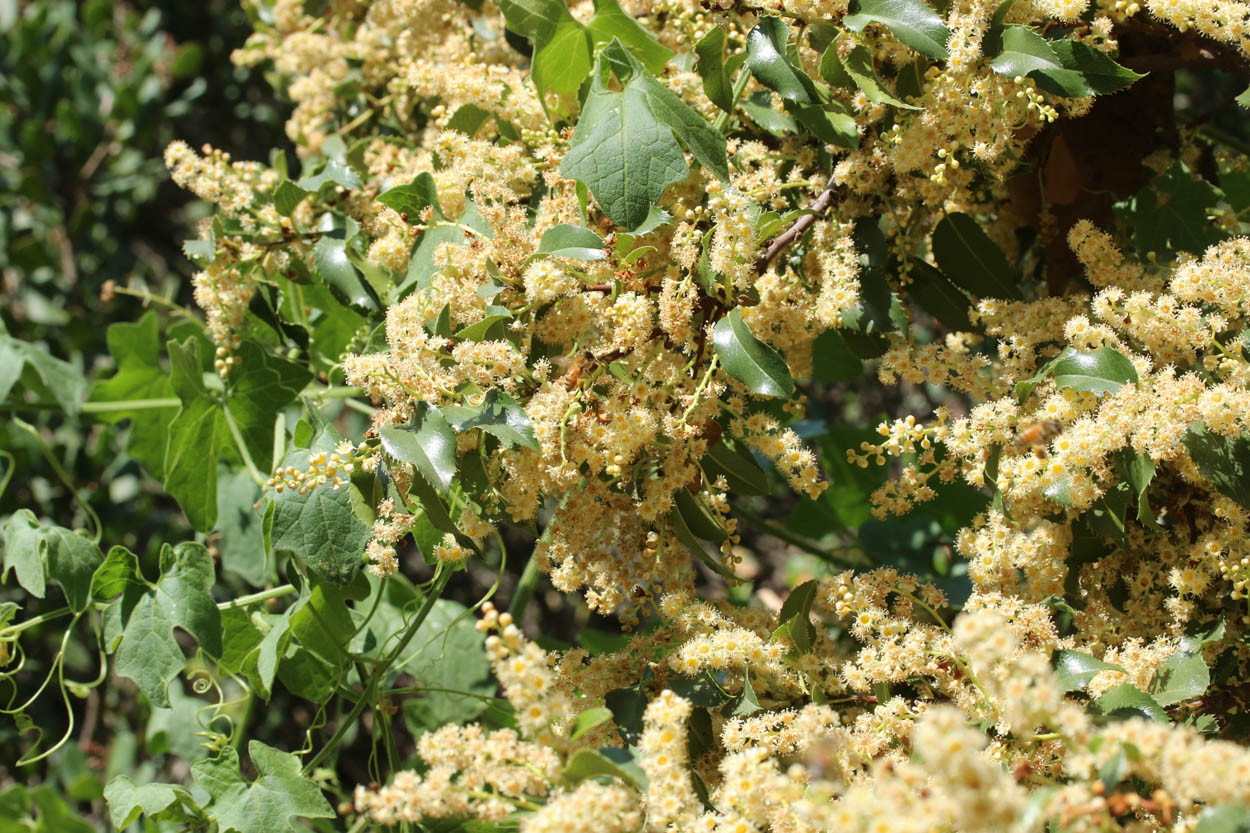 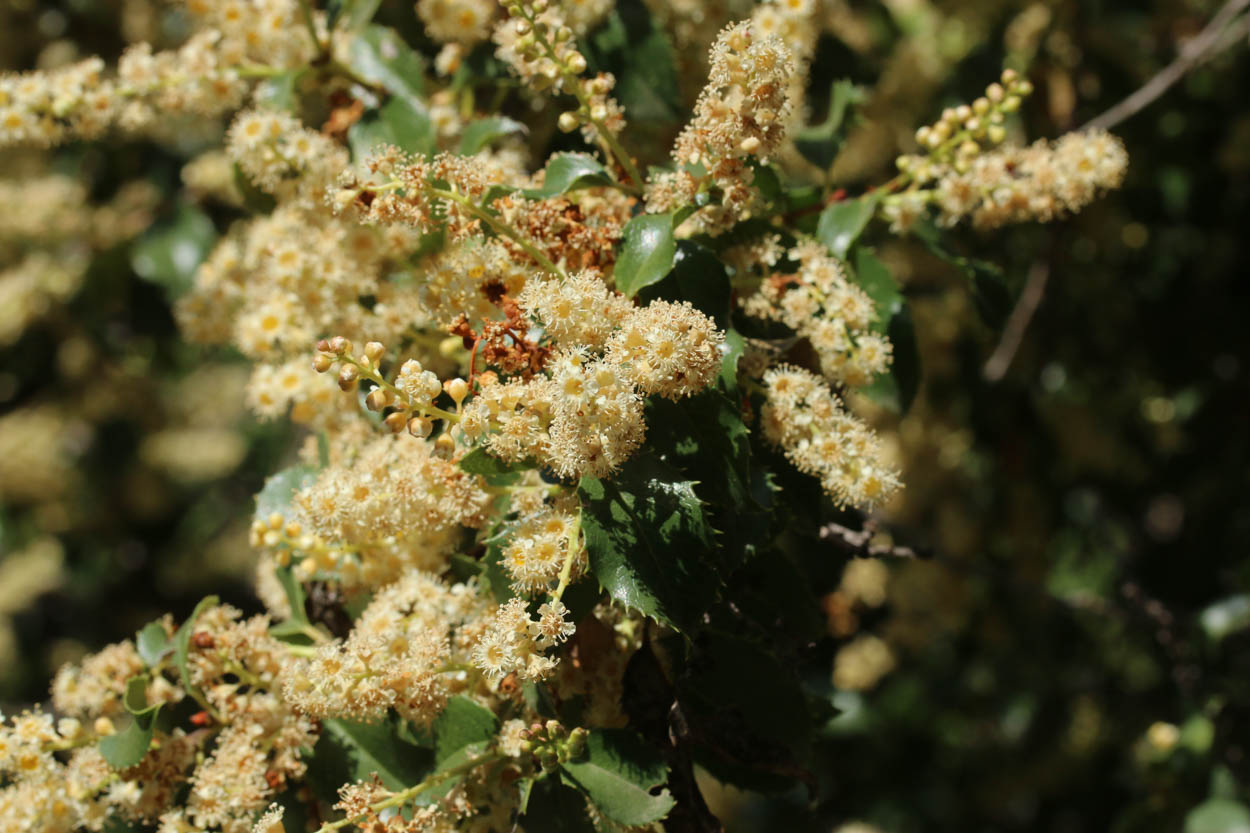 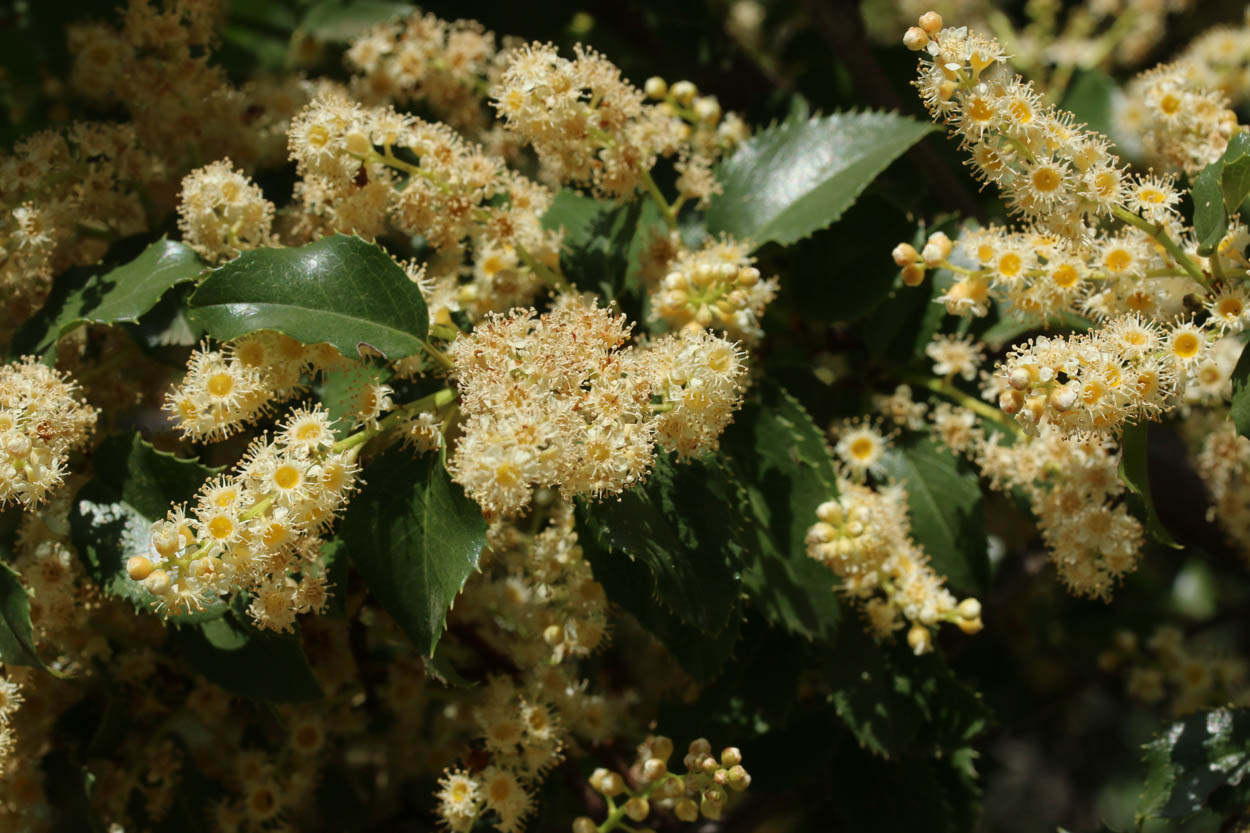 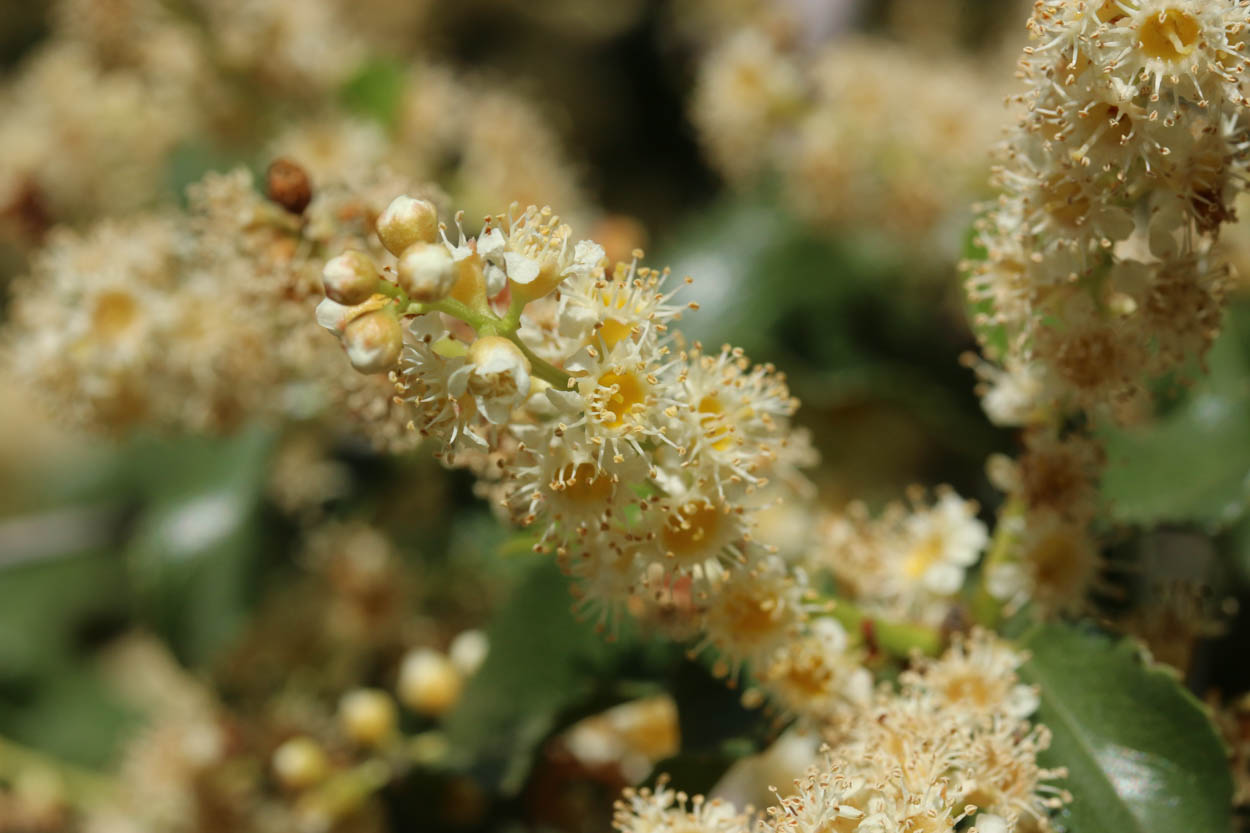 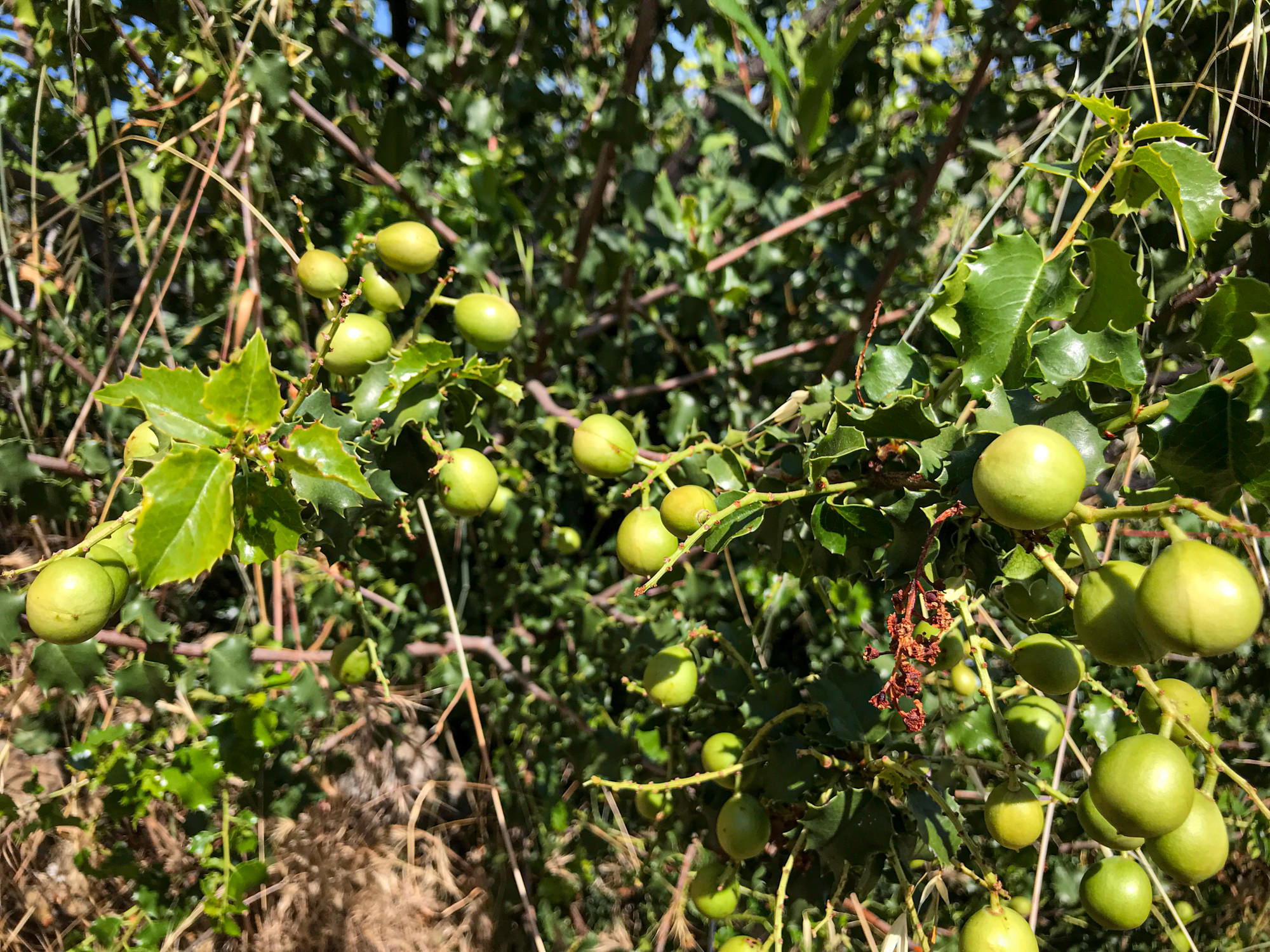 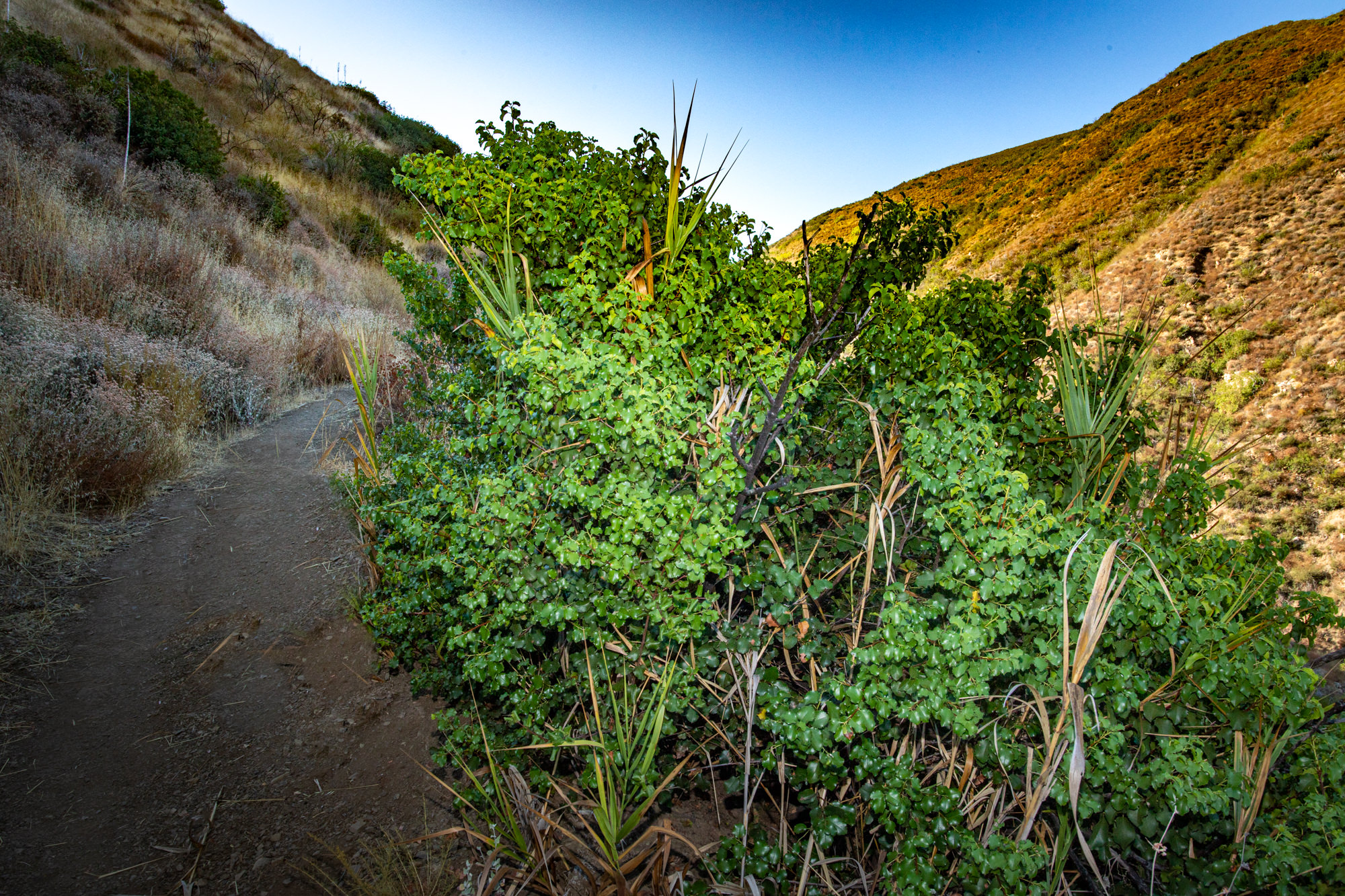 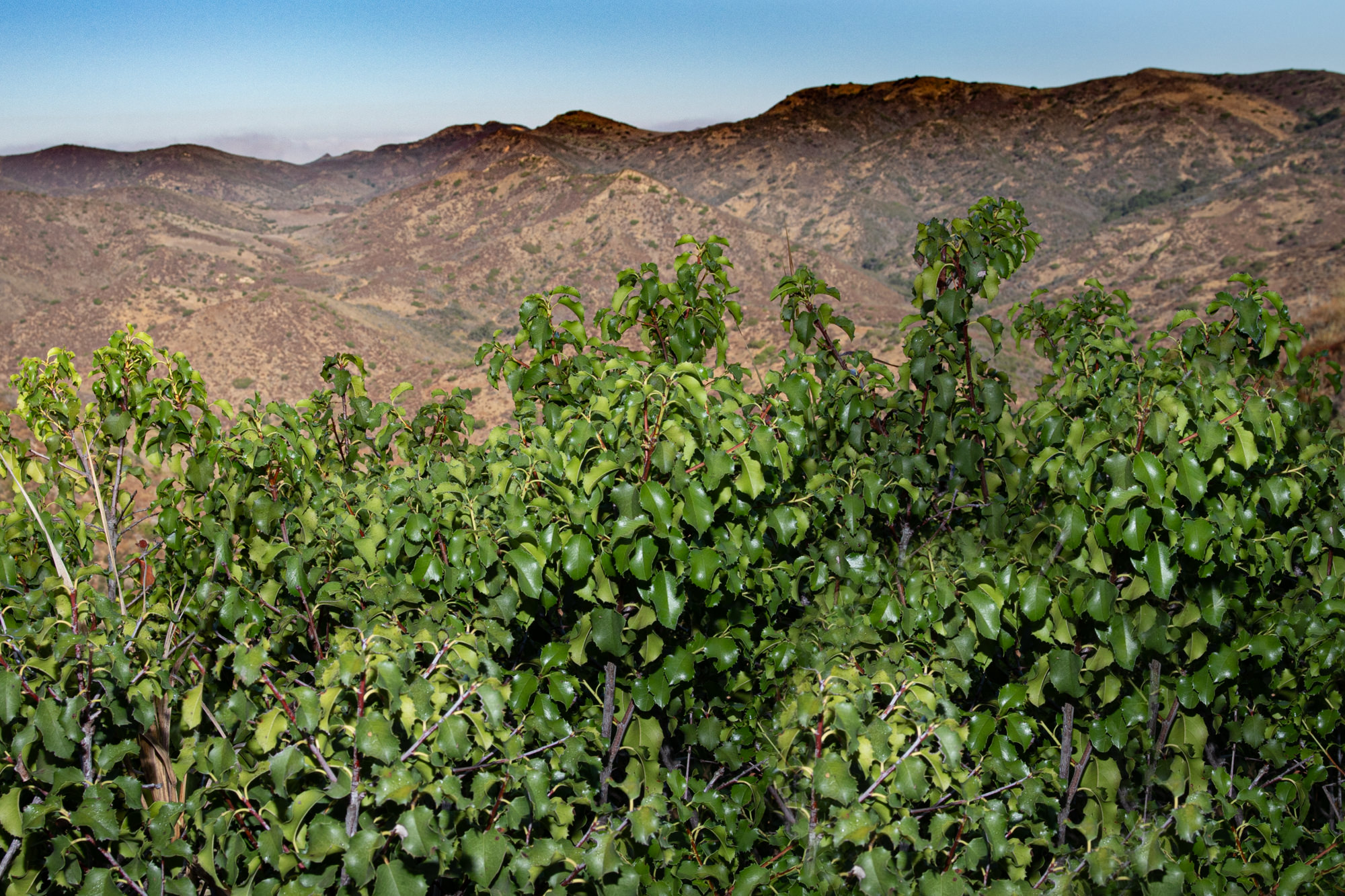 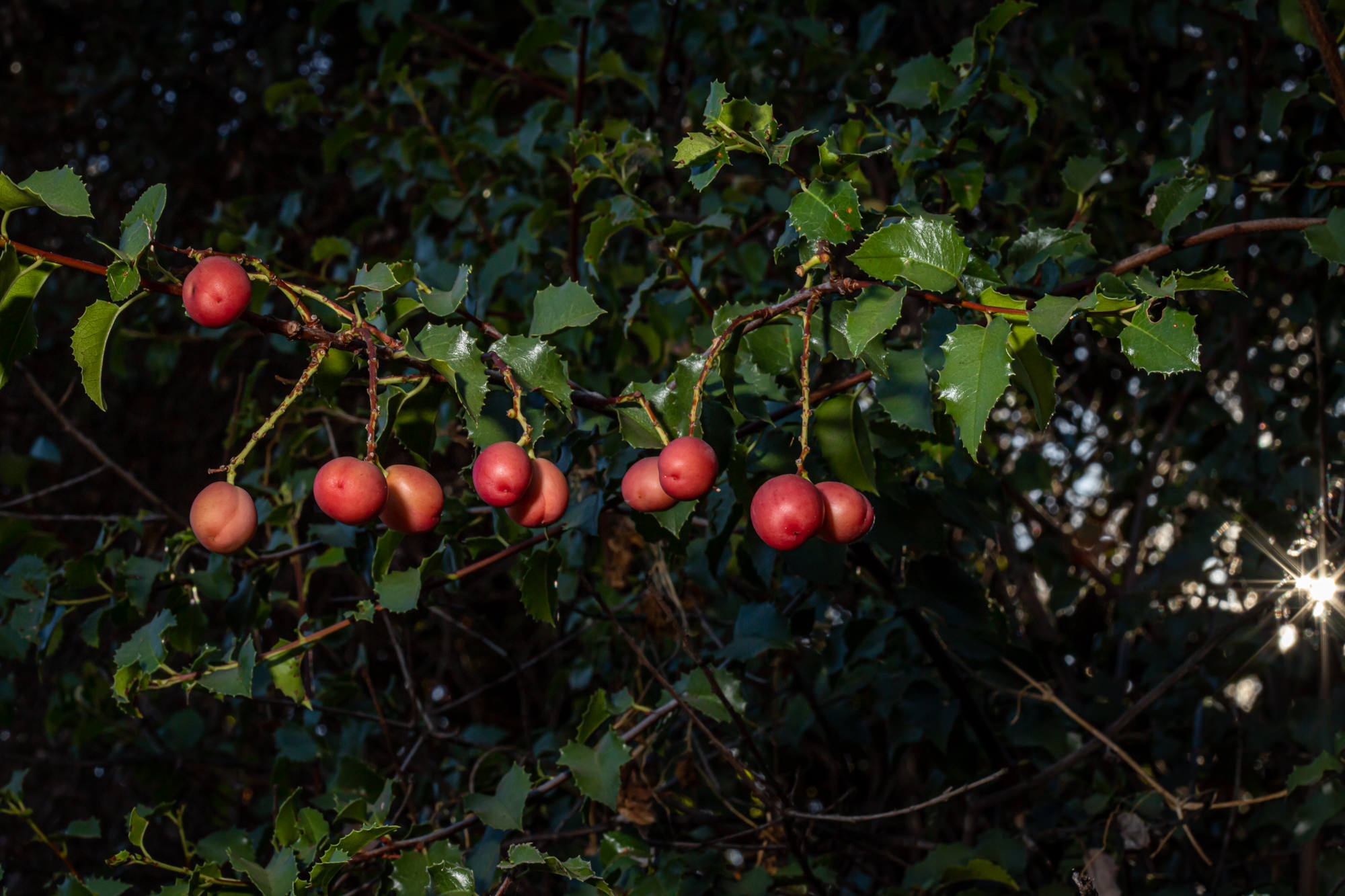 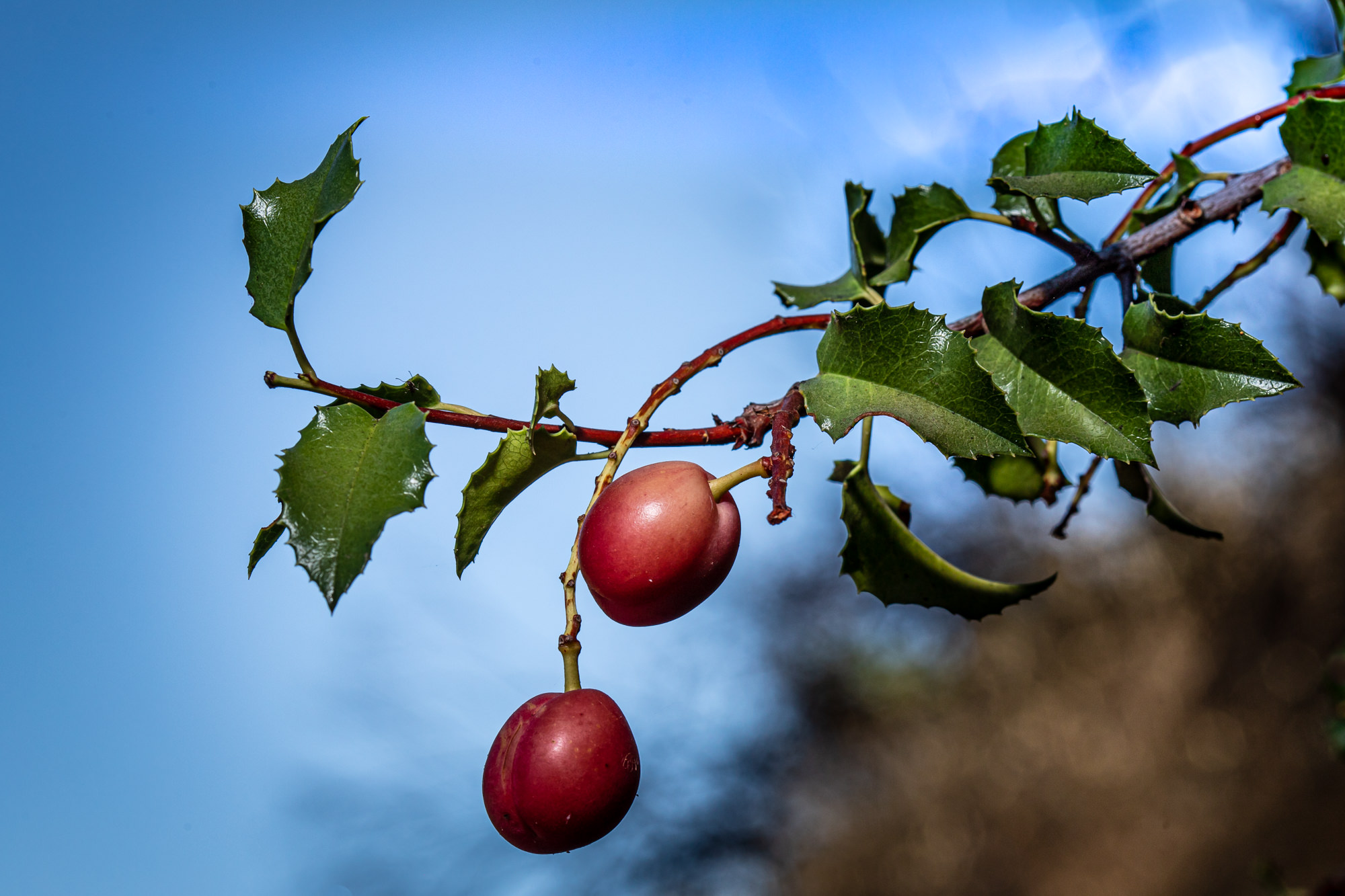 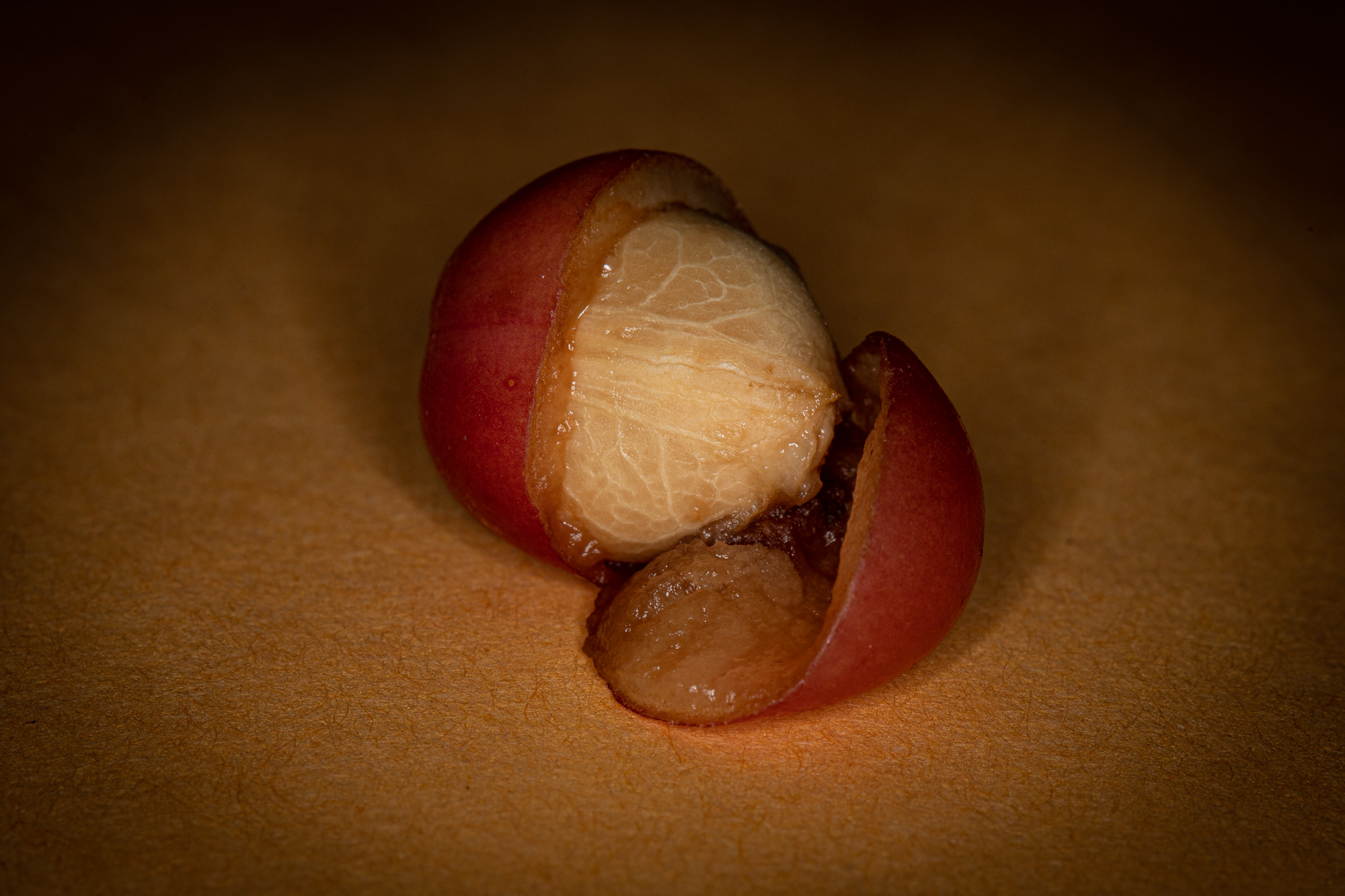 The early fall in Southern California is generally one of dry brush, few flowers and brown hillsides, there are a few bright spots, one of them being the Holly-leaved Cherry, which sets forth its fruit. Numerous red to nearly black fruits adorn the shrub waiting to be consumed as part of the process to disperse the seeds to potential new locations for the plant.

As can be gleaned from the common name, the leaves on this plant resemble those of holly - wavy, serrated and spiny edges, fairly rigid, a bit shiny, 1 to 2 inches long and oval. White flowers appear on terminal stems in spring from March through May. There is much activity around the blossoms as bees work to get their nectar. In September to October comes the fruit, which first forms as a red berry, enlarging and then darkening as it matures over the ensuing weeks, becoming almost black. The large pit on the inside is surrounded by a thin pulpy layer. Deer and birds enjoy dining on the fruit, which is edible to us as well in small doses. The pulp itself is sweet but the skin of the fruit is sour - a friend mentioned squeezing the pulp out between his tongue and the roof of his mouth and spitting out the skin and stone. The fruit should not be eaten in large doses however to avoid stomach upset, and do not eat the pit. While the pit and its contents do have edible properties, it contains a poisonous compound which takes special treatment to remove. Removal sounds like quite an involved process however one purportedly worth doing from the various accounts I've read. Native people also made use of the bark and roots to treat colds. The USDA has some excellent guidelines on the subject of preparation, other uses, and general characteristics of the plant if you want to know more.

Holly-leaved cherry can be a nice addition to your garden. Its size can vary depending on habitat. On hillsides it normally takes the form of a rounded shrub, while canyon-bottom-dwelling plants can be very large, almost tree-like. It is relatively slow-growing, and after a fire it recovers from resprouting. The seeds themselves do not normally survive a fire. There is debate on the precise conditions needed for the seeds to germinate, however it is also reported that volunteers are plentiful and that seeds normally germinate fine unless they are too old.

The scientific name Prunus means plum and is the standard name for plum-like plants such as peaches, plums and apricots. Ilicifolia refers to the holly-like leaves. The plant and its parts were commonly called Islay historically by native people.