Plant of the Month - Lyons Pentachaeta 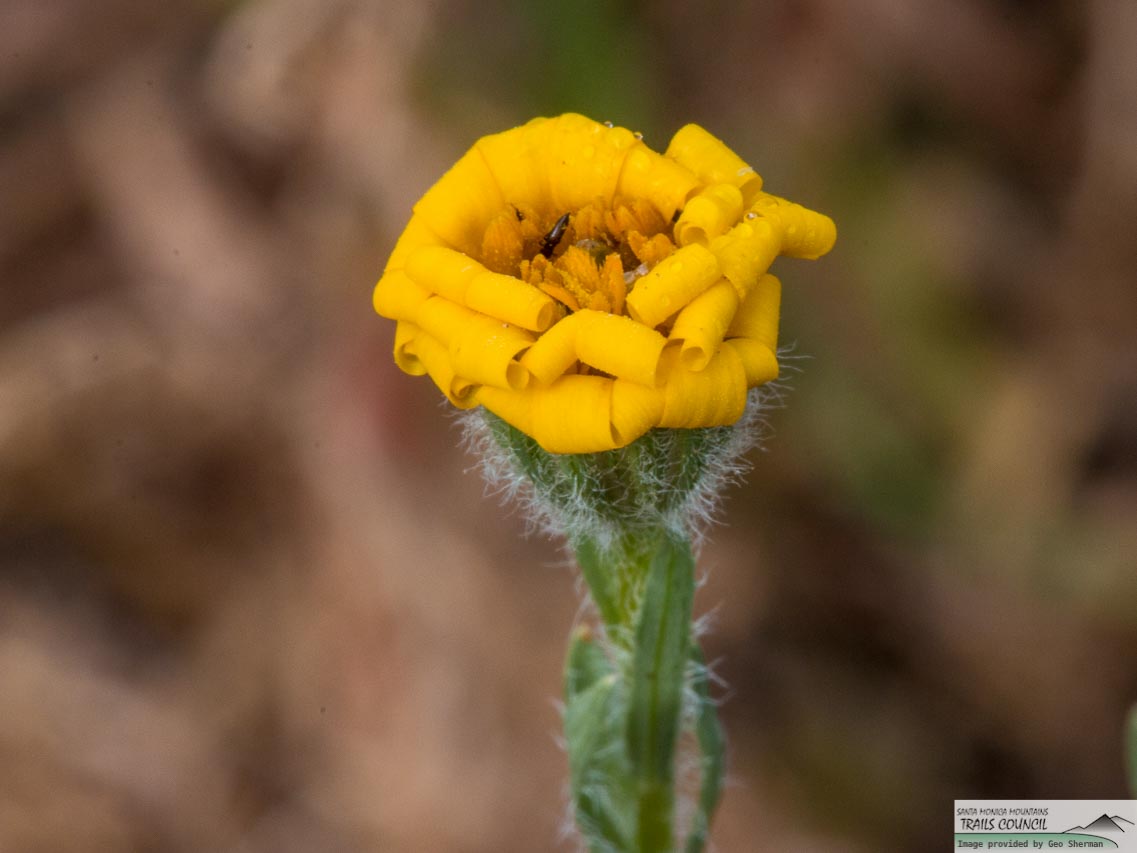 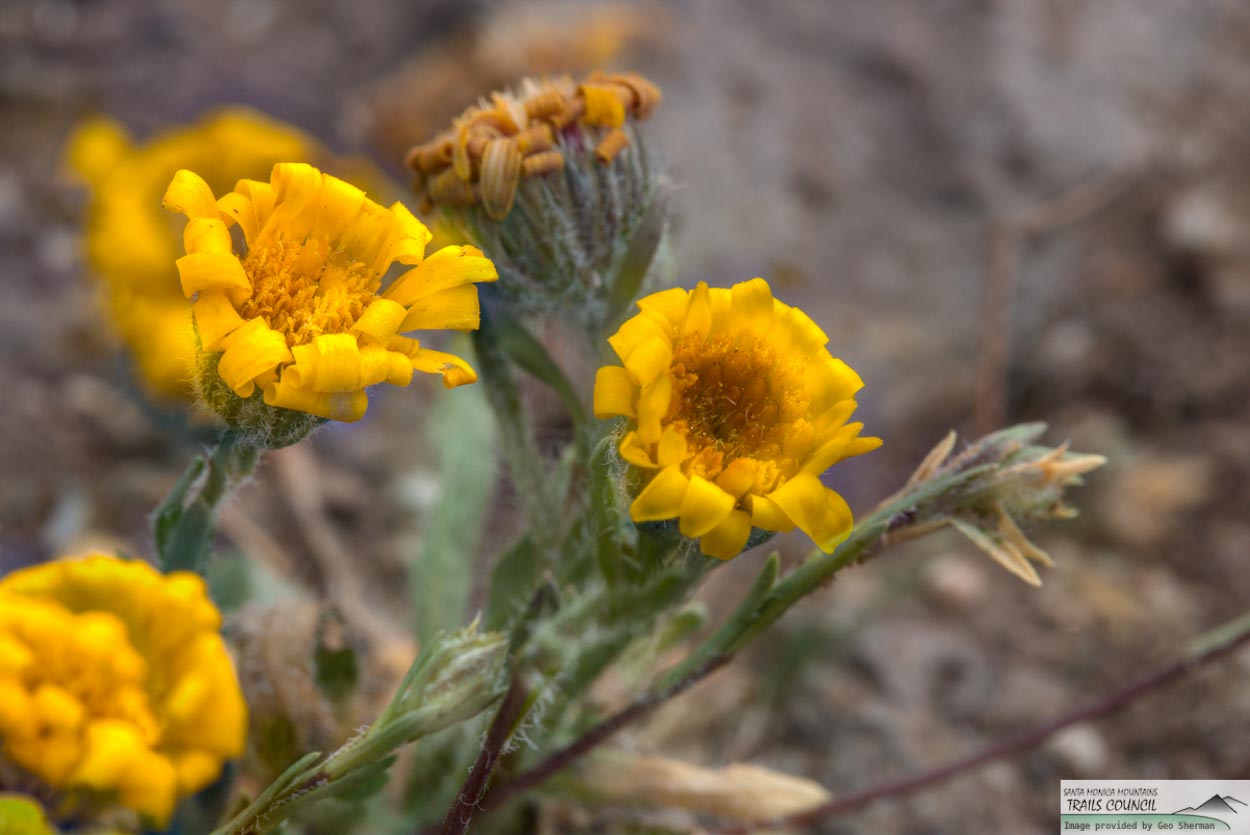 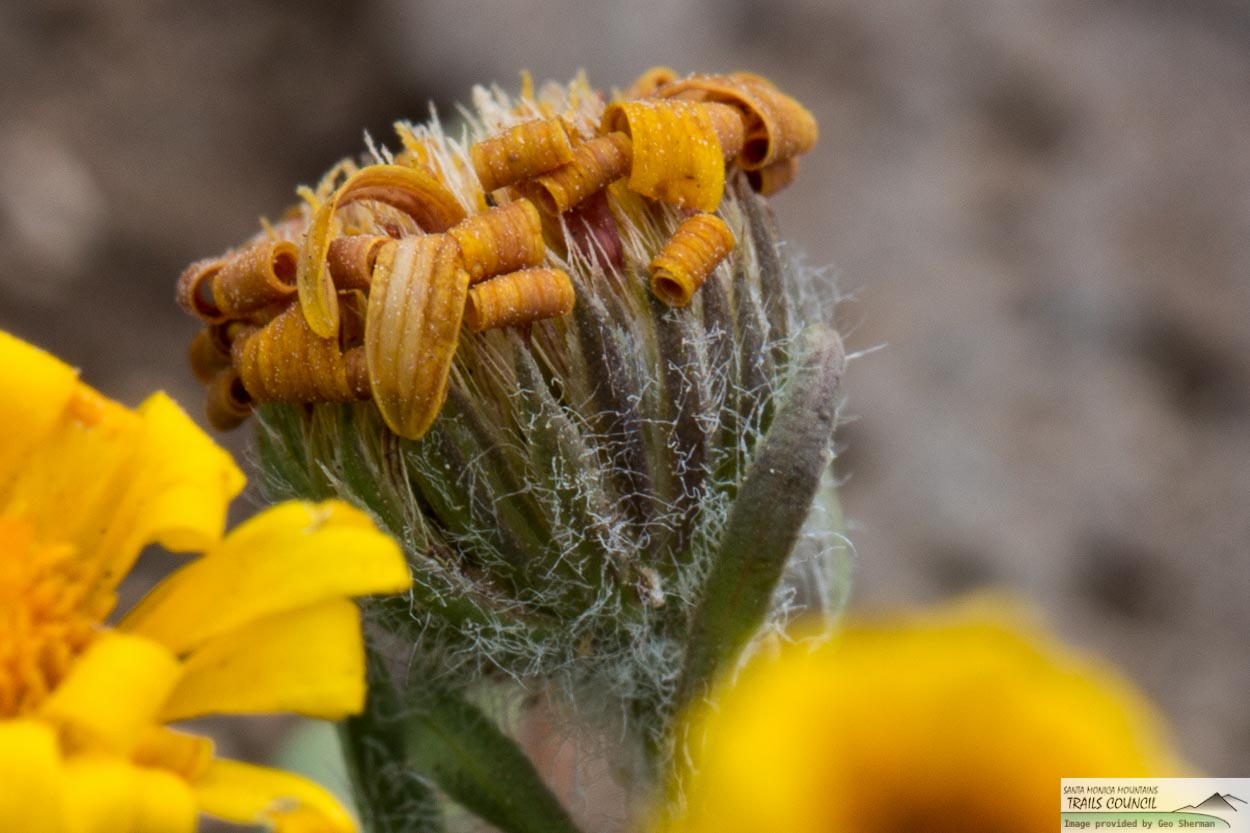 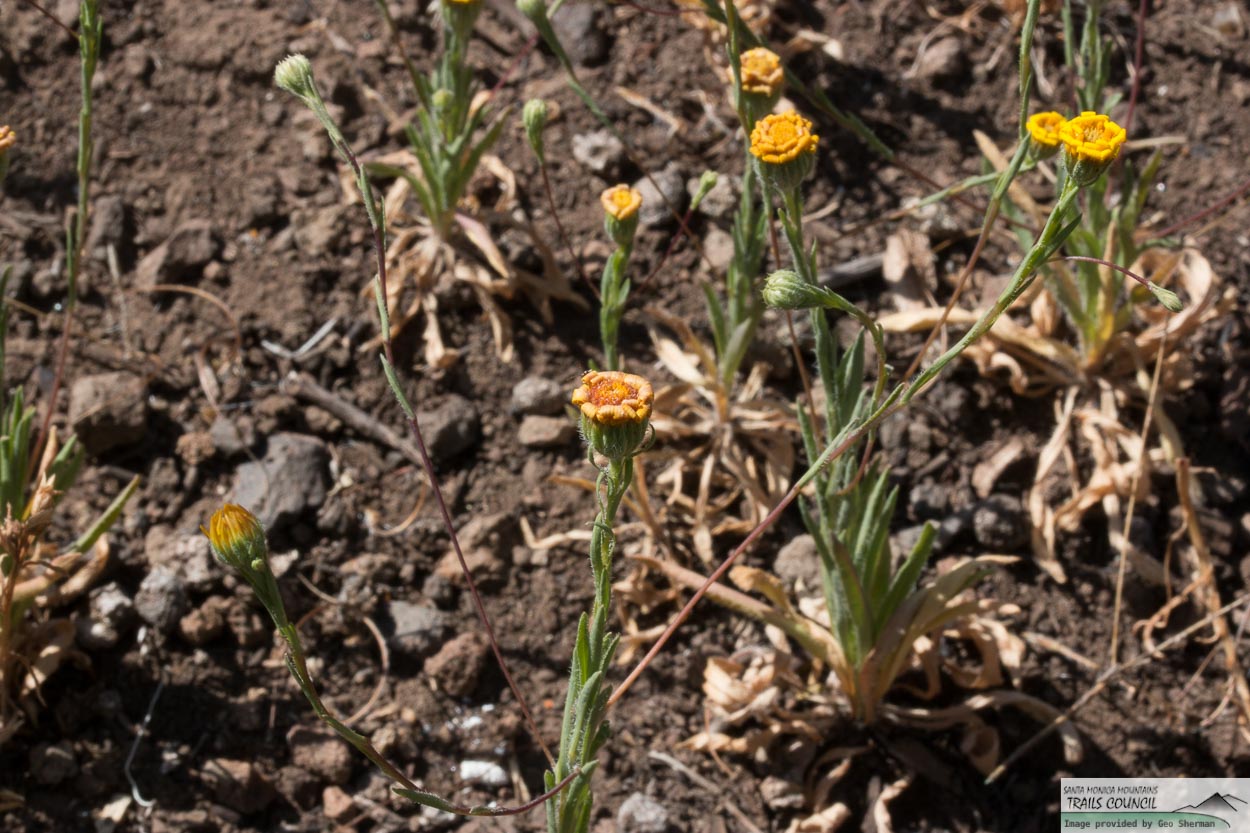 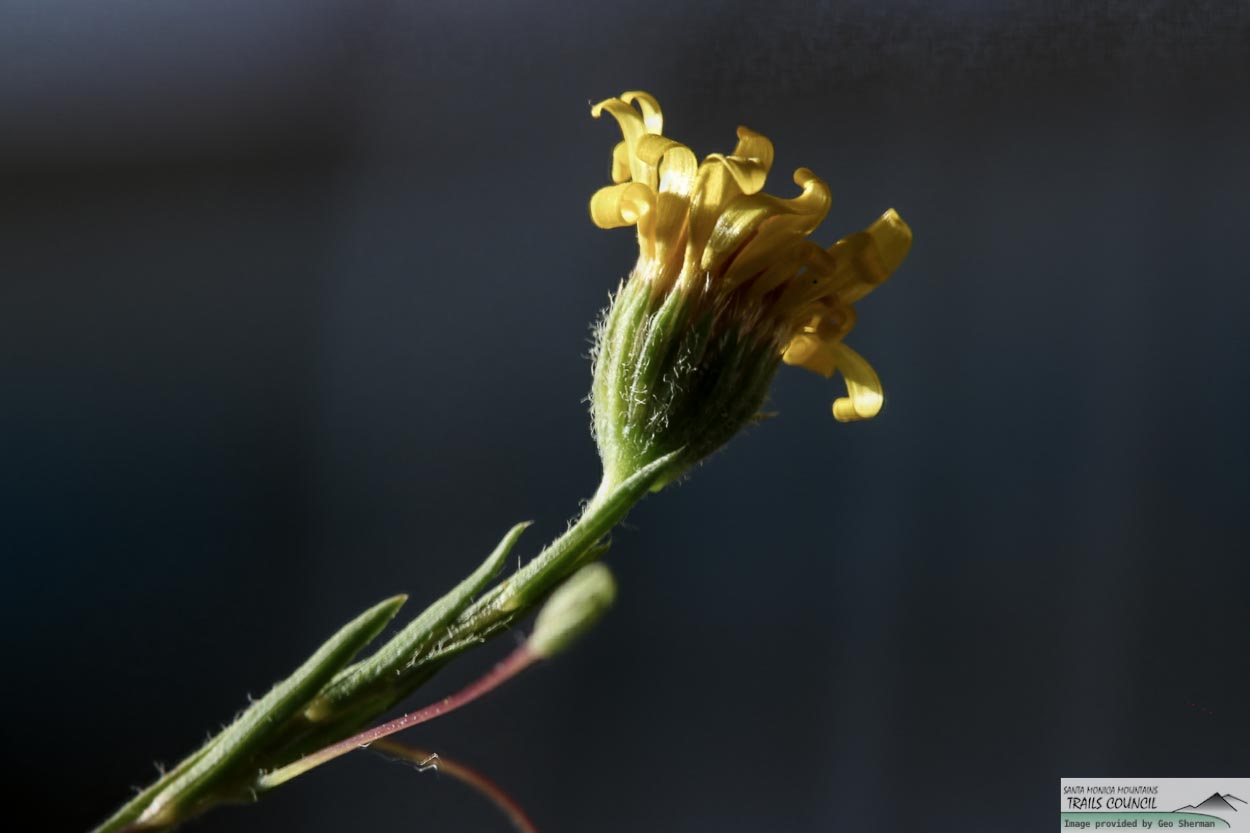 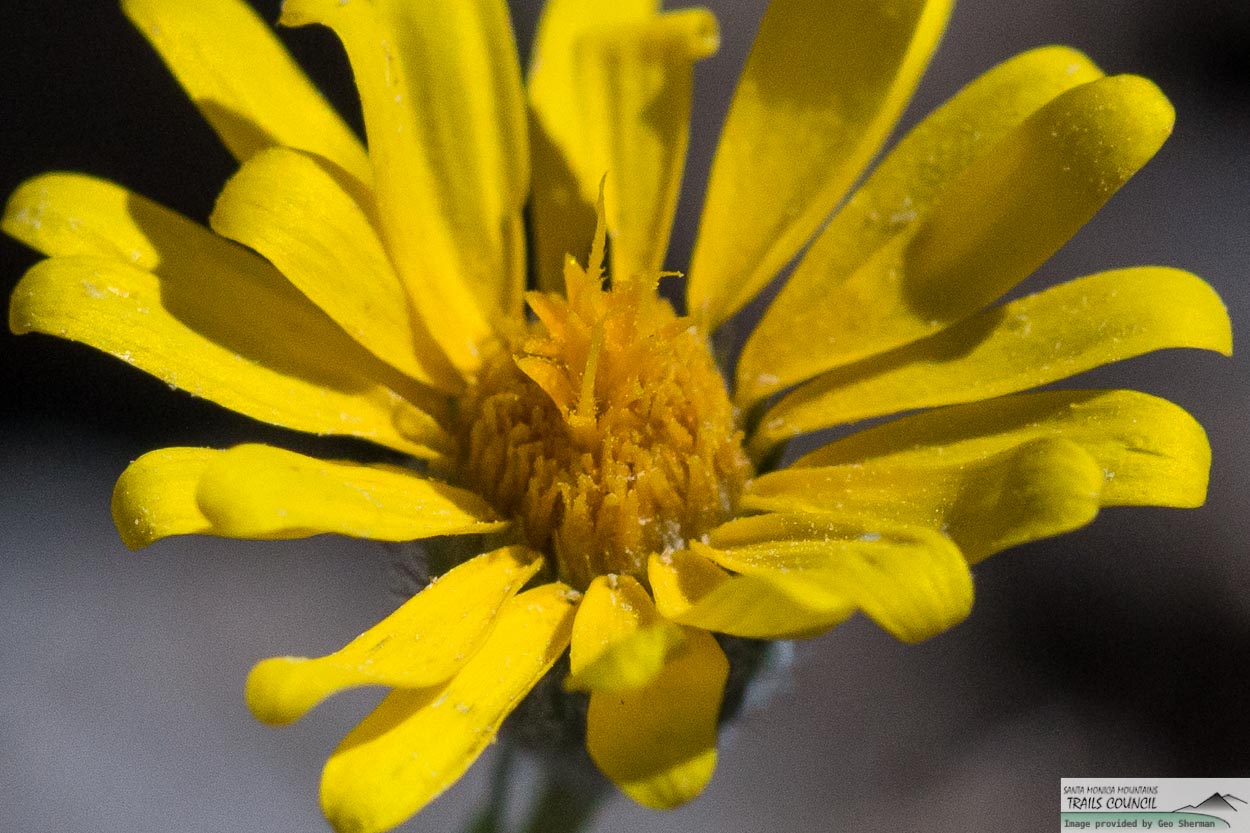 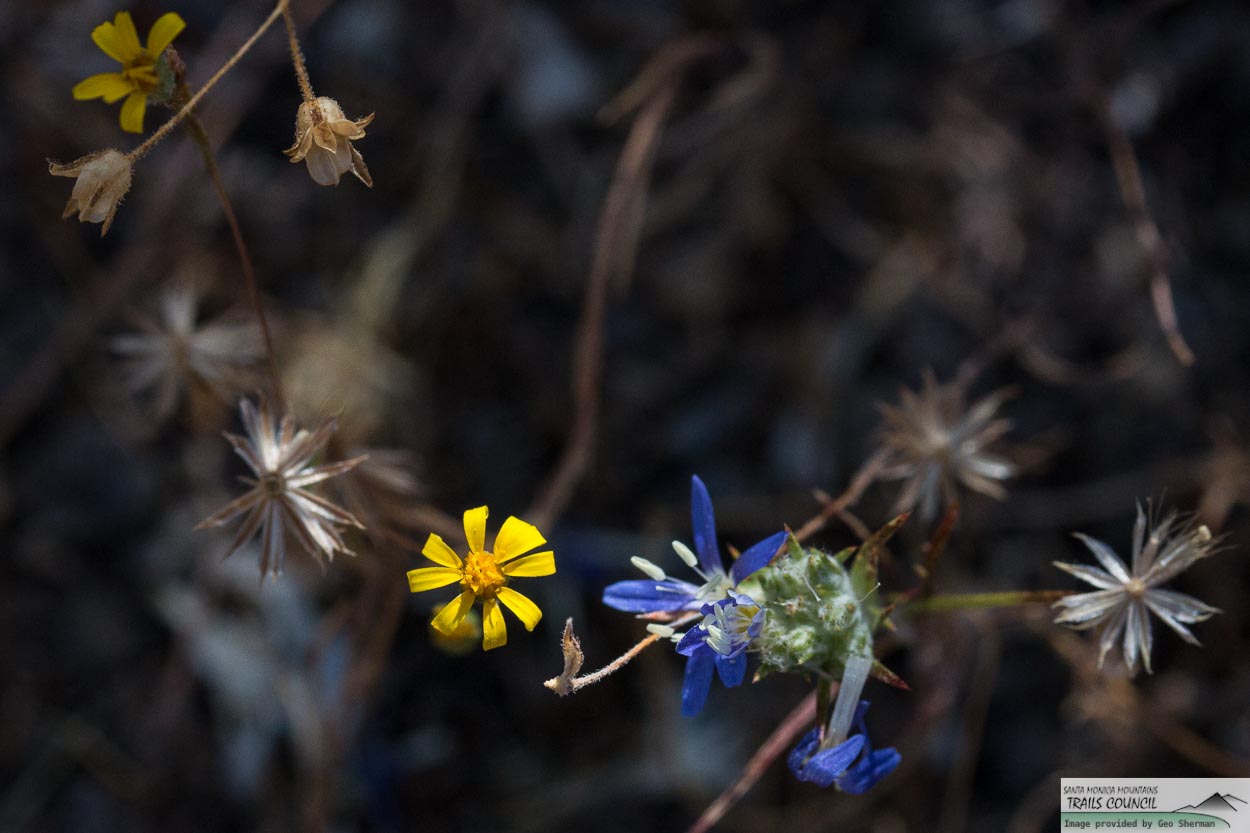 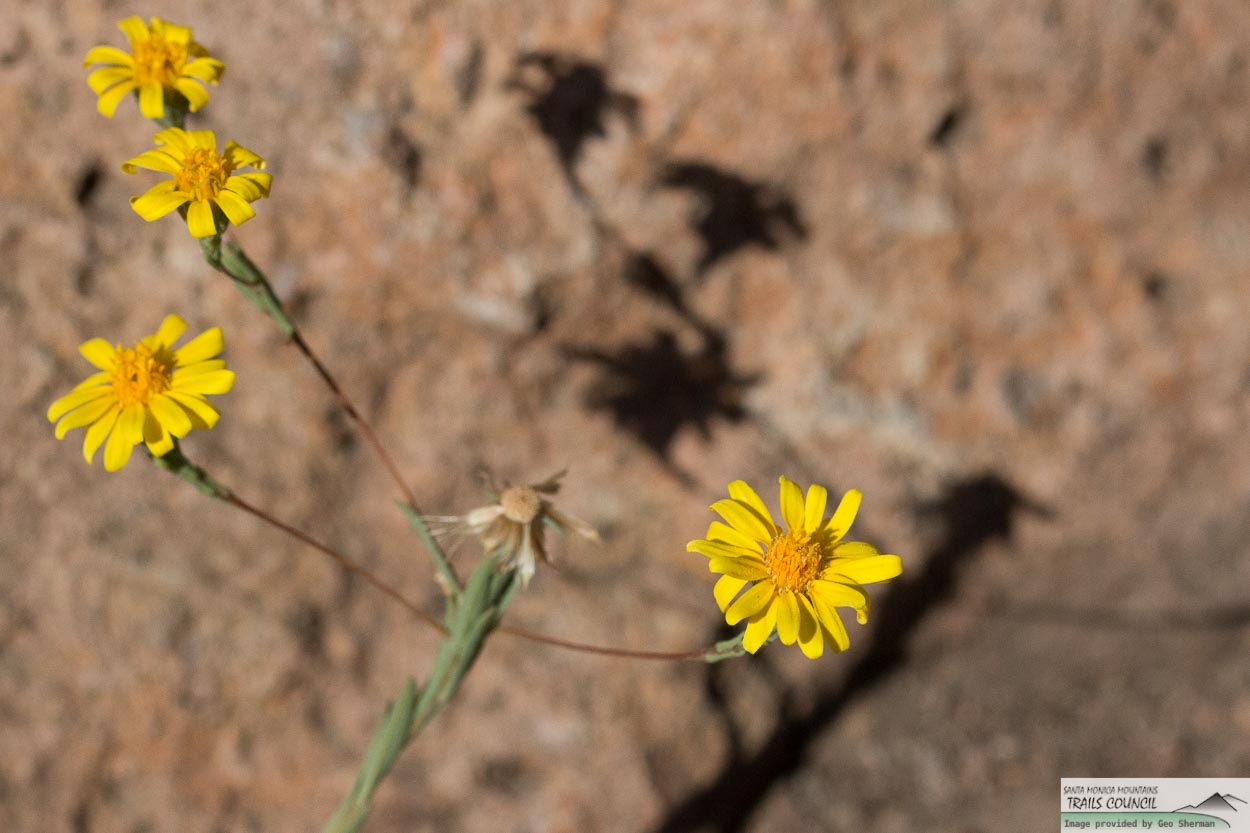 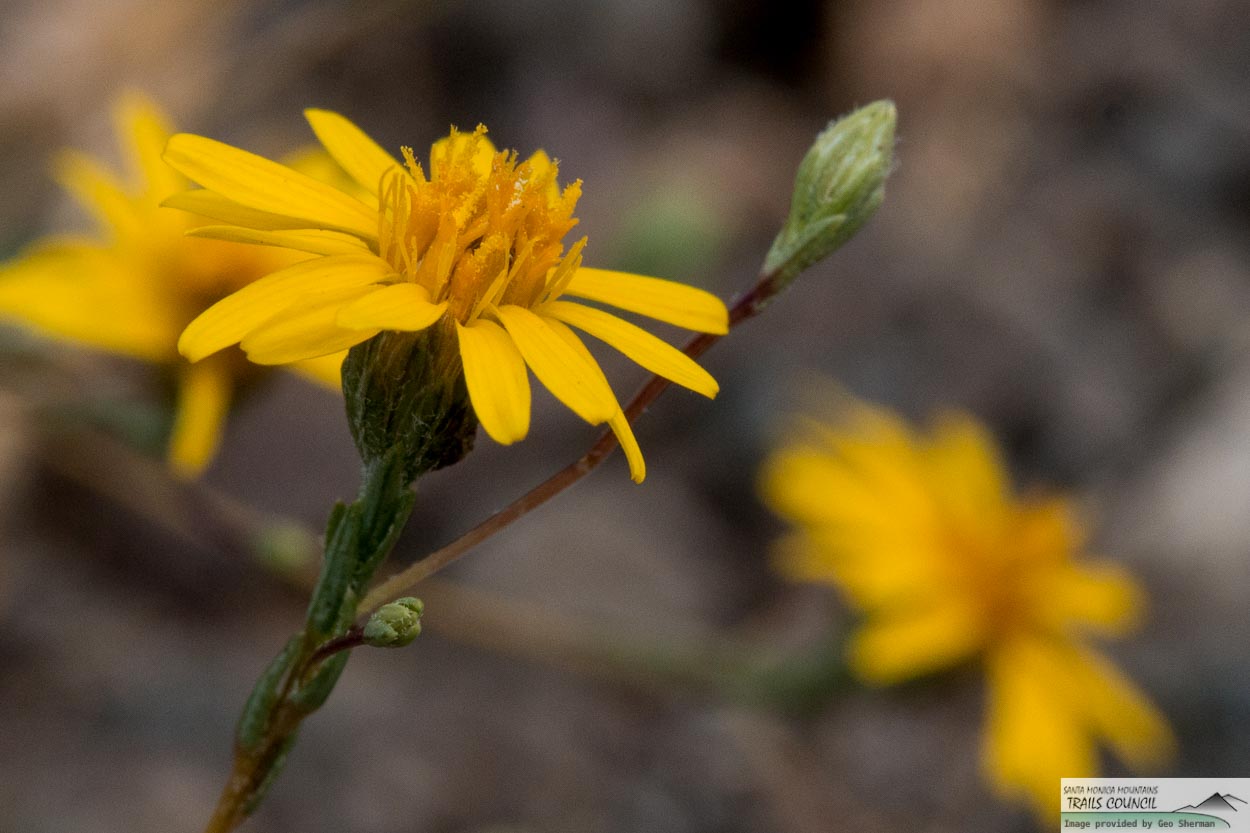 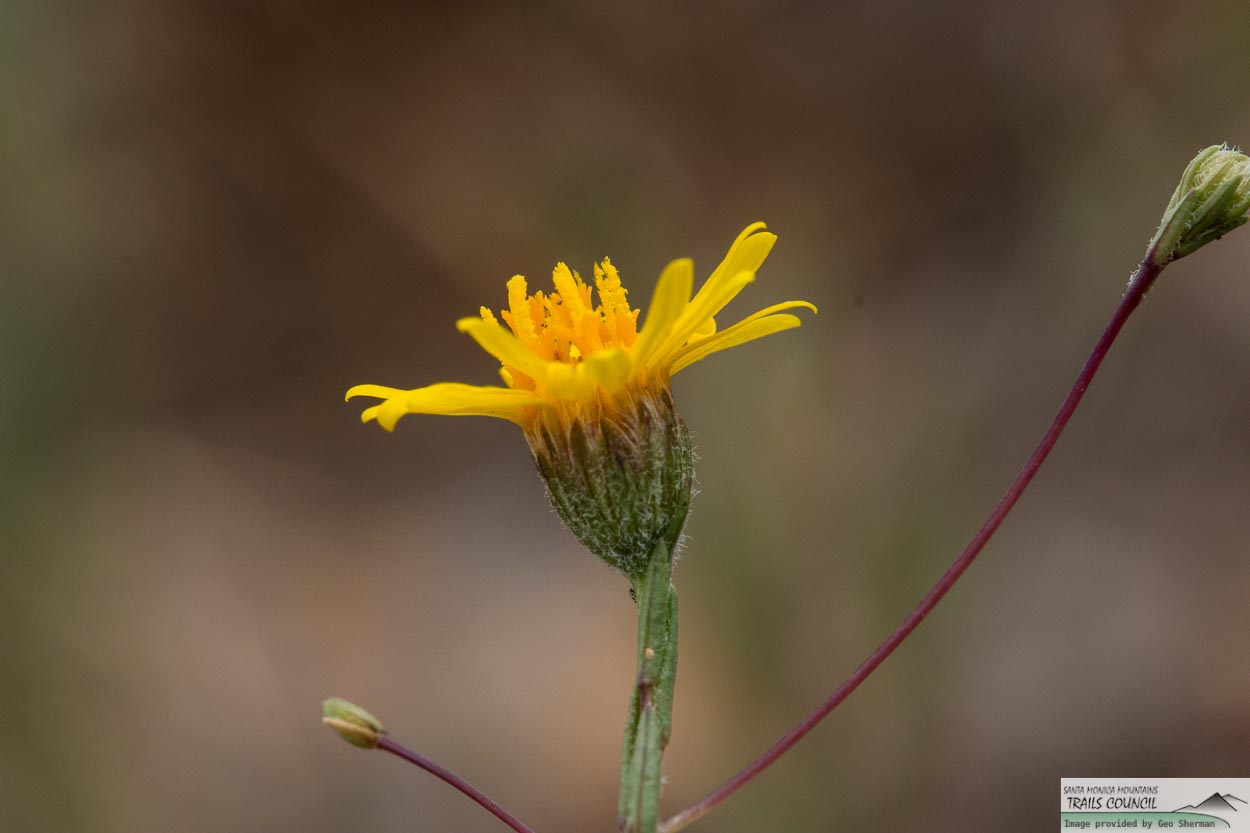 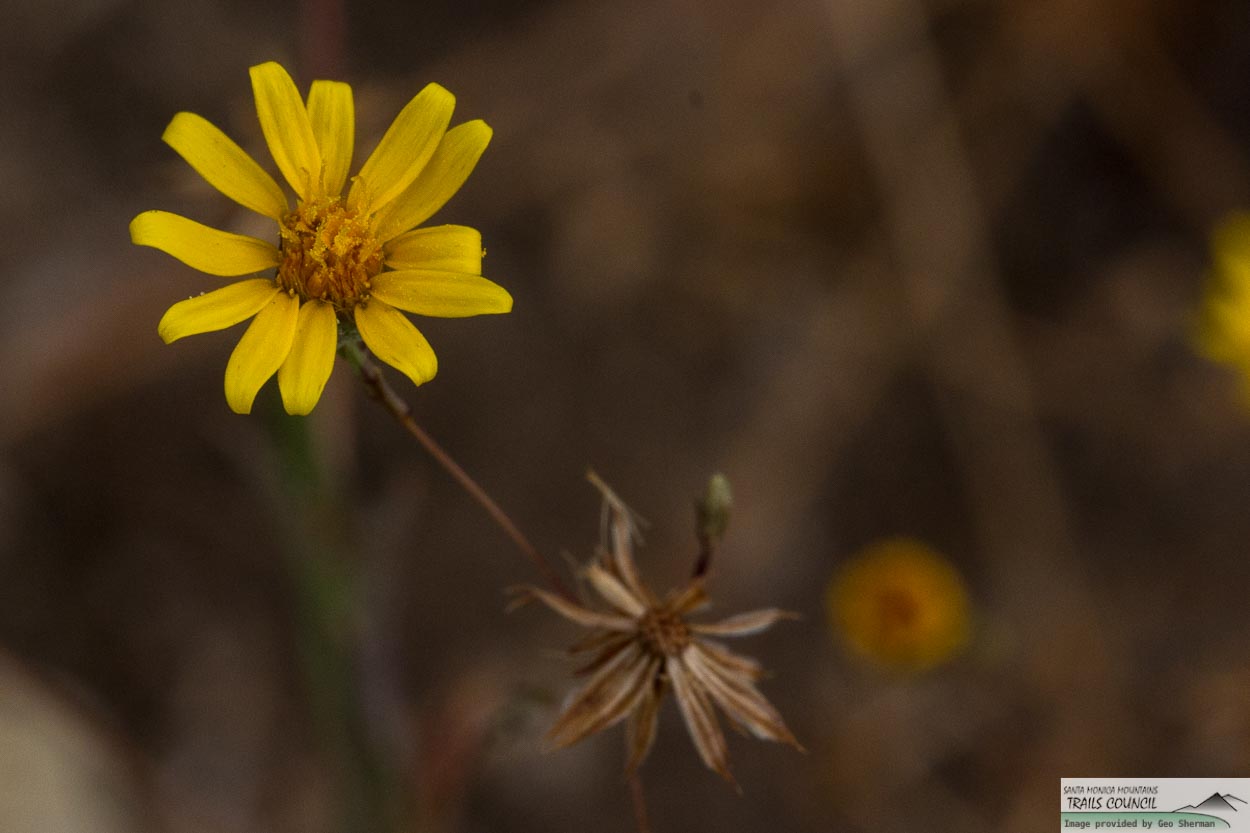 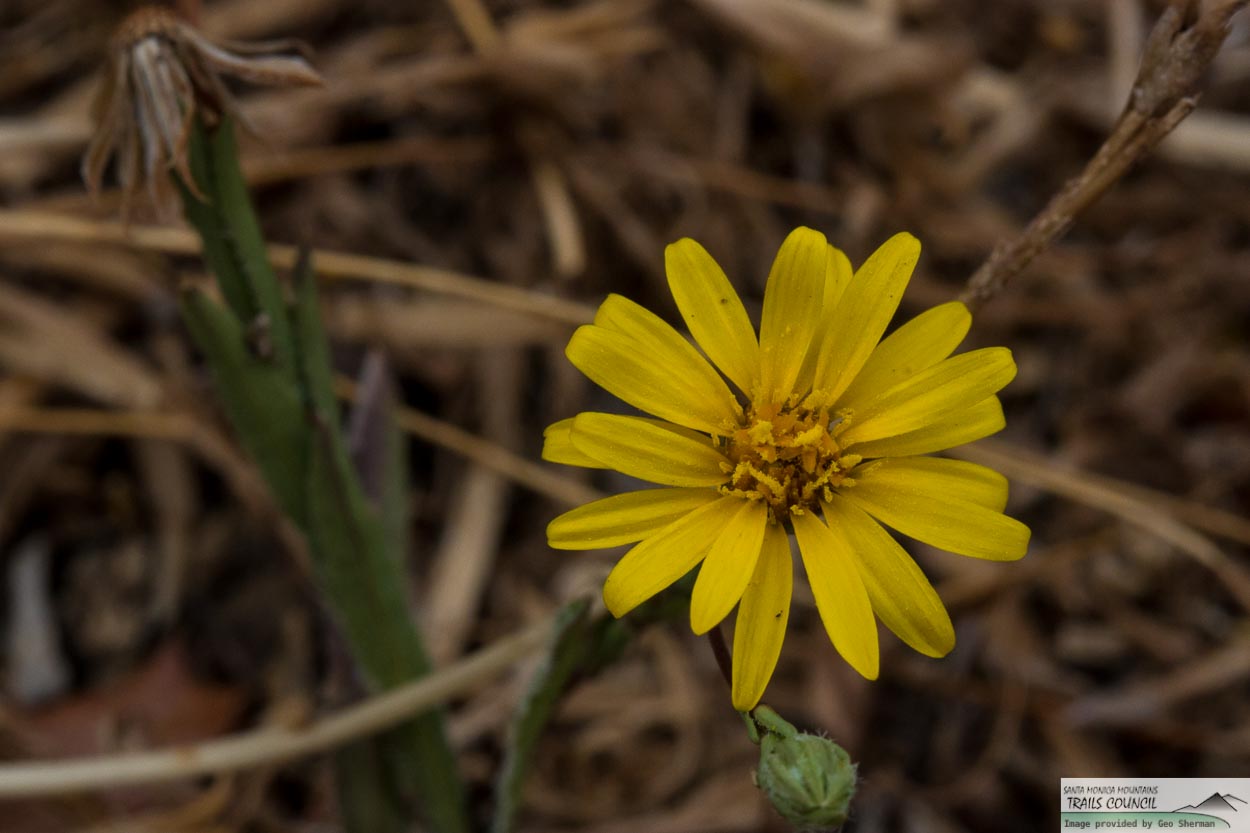 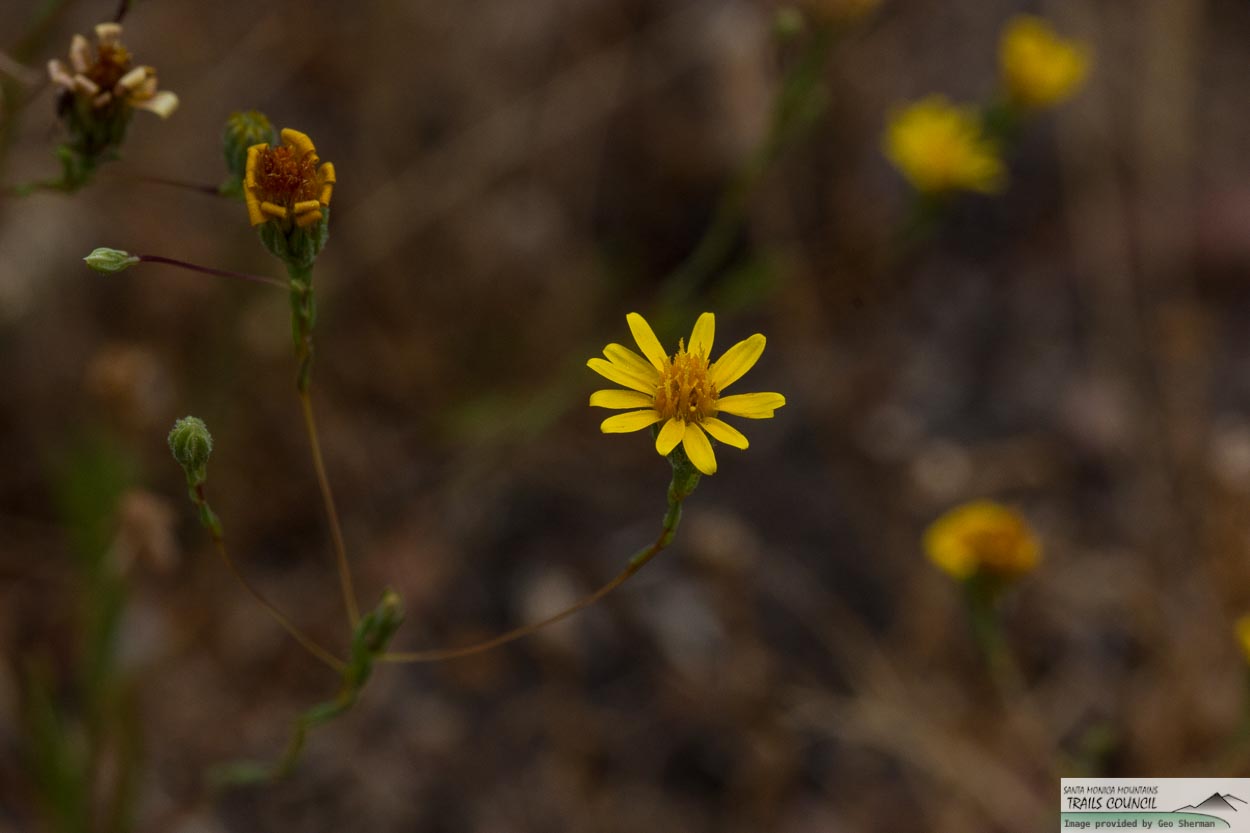 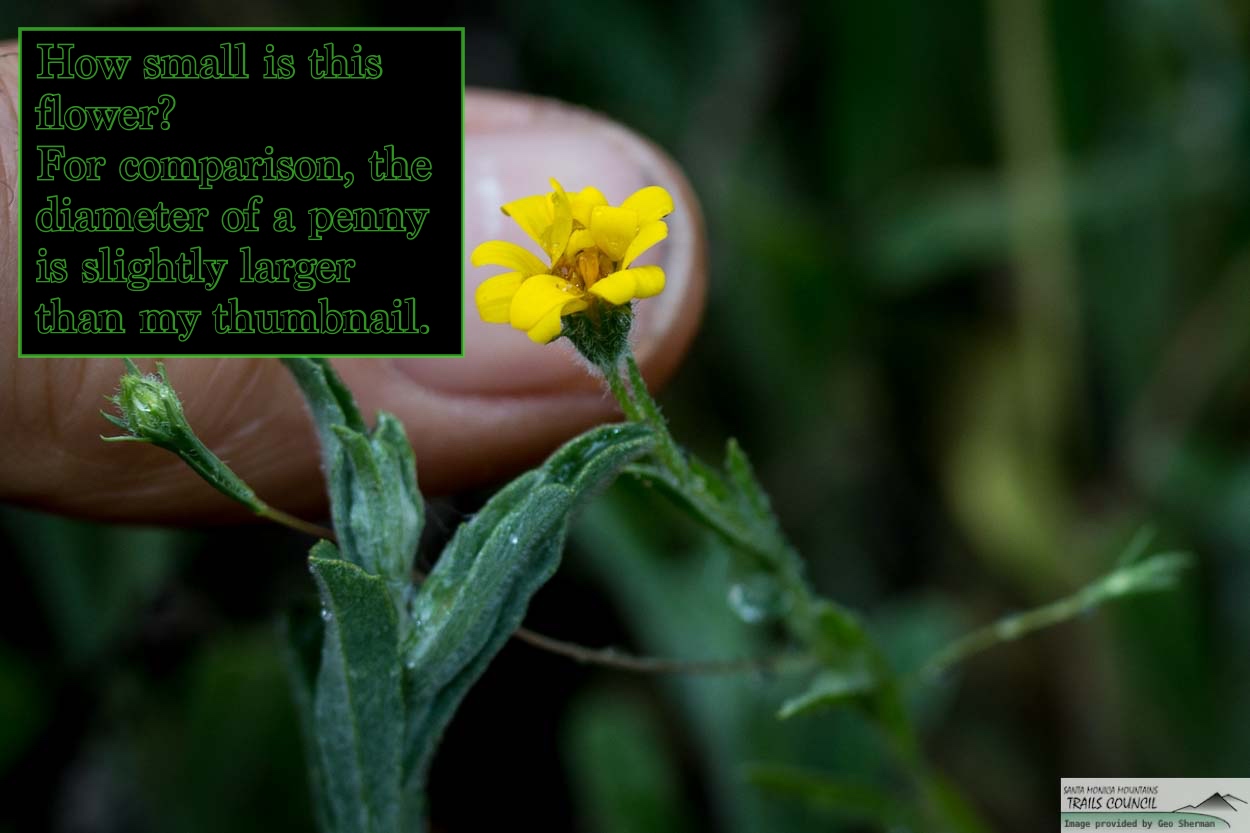 Pentachaeta lyonii, Lyon's pentachaeta or Lyon's pygmy daisy, is an annual plant in the aster family. It is endemic to southern California, but can be found only in a few areas of Los Angeles and Ventura Counties. This scarcity has prompted our State and Federal governments to consider the plant an endangered species. Specifically listed as California Rare Plant Rank 1B (formerly List 1B): Plants Rare, Threatened, or Endangered in California and Elsewhere. Read more about this designation. The plant is under siege from development, invasive grasses, and an increased fire cycle in its preferred habitat.

Pentachaeta lyonii tends to grow best in compact soil, exposed, rocky clay soils of volcanic origin that exhibit a microbiotic crust [Microbiotic crusts are formed by living organisms and their by-products, creating a crust of soil particles bound together by organic materials. Source quoted from https://www.nrcs.usda.gov/Internet/FSE_DOCUMENTS/nrcs142p2_053263.pdf]. Favorable growing conditions also include limited disturbance and few competitors. The plant requires insect pollination. If you look at the plant, you will likely find insects crawling over them. The seeds have deciduous pappus bristles - which limits their ability to be dispersed by the wind. Birds or mammals may eat the seeds and play a part in the dispersal process. The pappus acts like a parachute and uses the wind to further disperse the seed. The plant develops the pappus but sheds it prior to when it could be of use. The seeds can remain viable for several years in the soil. Plants favor small open, grassy sites that are in proximity with fire-adapted Chaparral or coastal sage scrub; Keep an eye out for fire road and trail edges to increase your potential for successfully finding this plant. Occupied sites tend to feature a mosaic of bare ground patches in an area with limited vegetative cover. Pentachaeta lyonii to occur on exposed, rocky clay soils of volcanic origin that exhibit a microbiotic crust. Amazing how such a tiny plant grows in such harsh soil conditions! Look for this plant and its quarter inch flowers to begin blooming in late Spring and into early summer.

A developer wanted to build several hundred homes near the Westlake reservoir during the 1990's. This development would have severely damaged the habitat for Pentachaeta lyonii. Voices for and against had their days in court. In the end, the environment won out. What would have been beneficial to a small group of homeowners is now part of Triunfo Creek Open Space. This area has a large variety of plants and flowers for hikers, bikers and riders to enjoy. Link to Newspaper Article from the 1994

Name Origin: From the Greek pente and chaite - bristle long hair slender bristles at the base of the pappus. William Scrugham Lyon, who collected in Southern California and the Philippines, is the source of lyonii.