Plant of the Month - Poison Oak 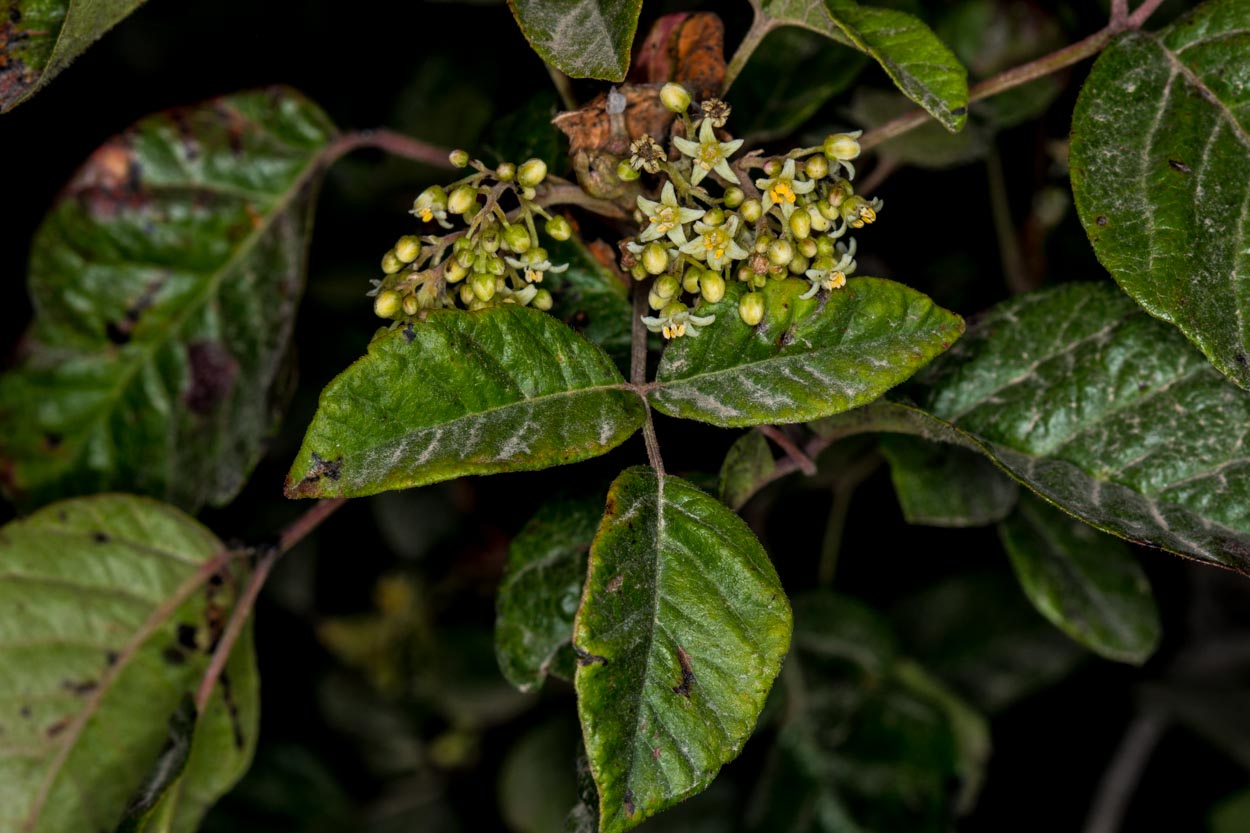 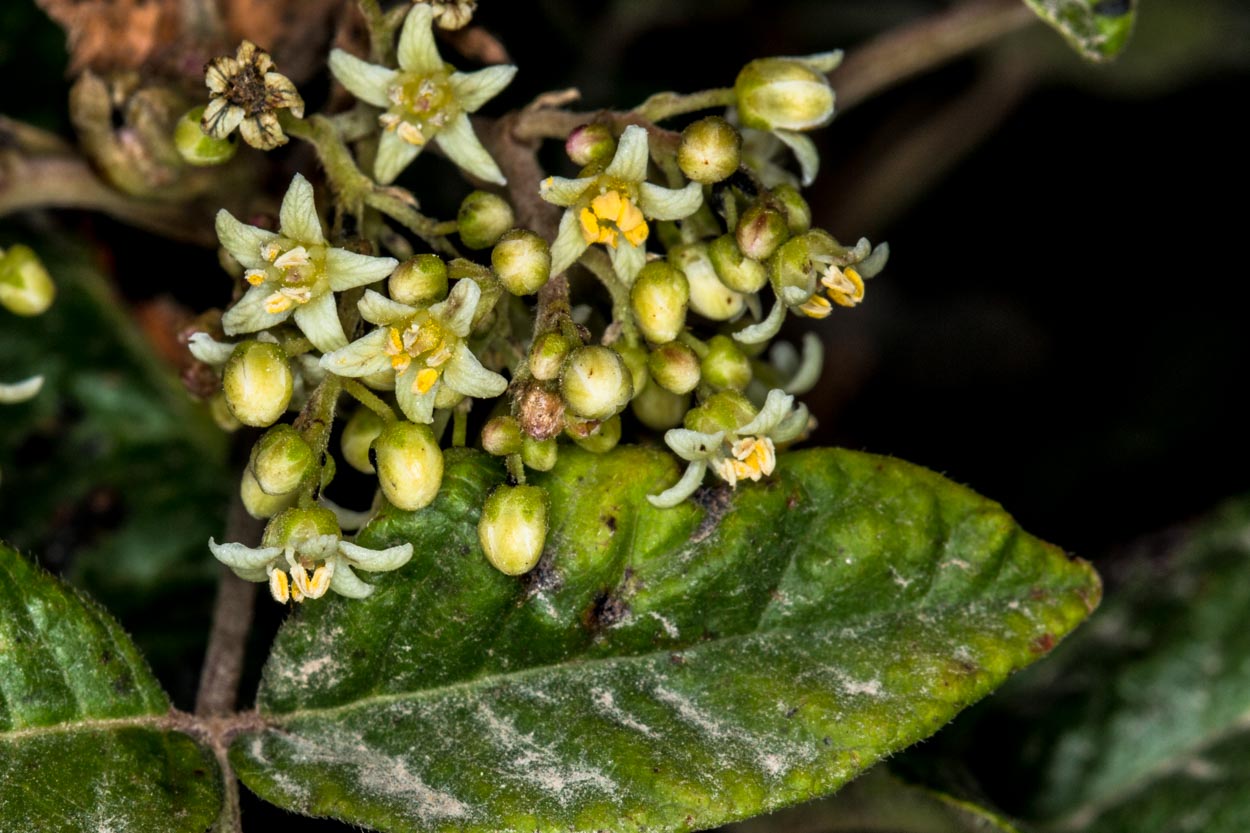 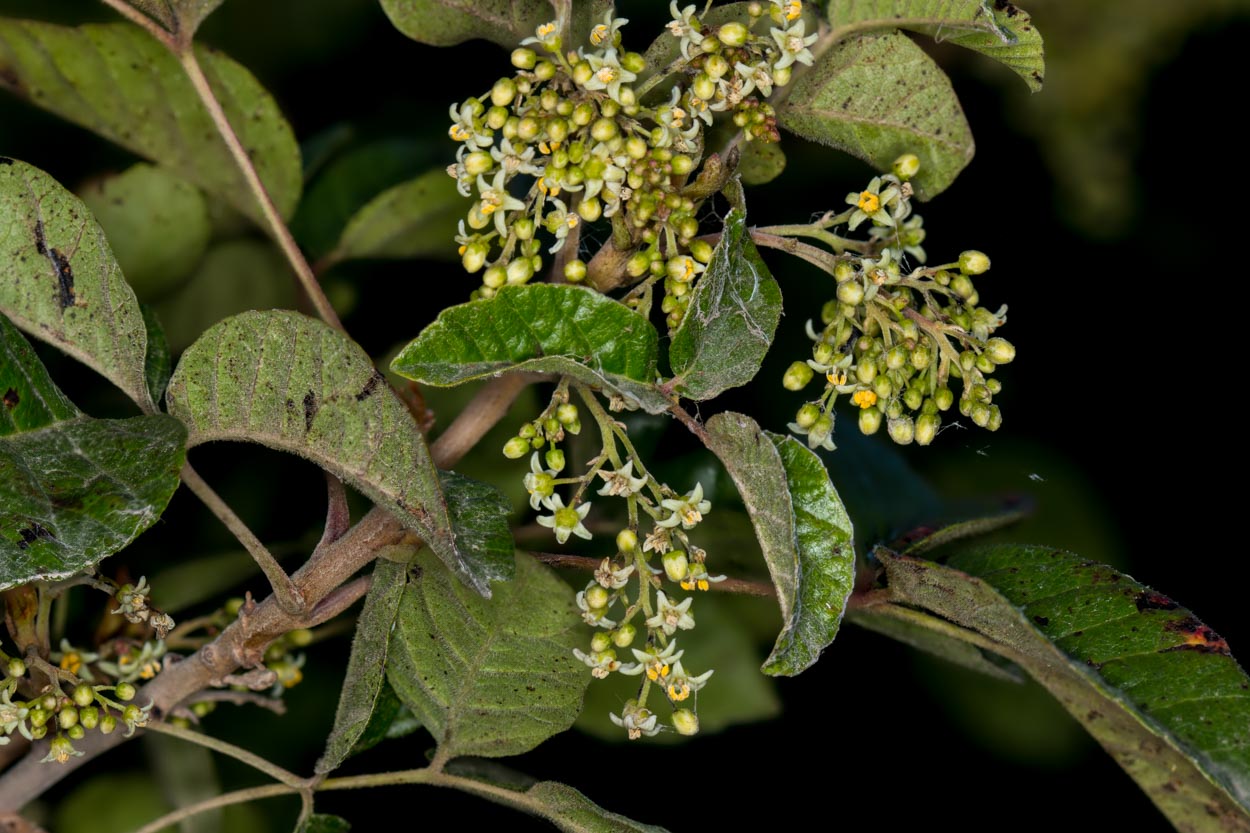 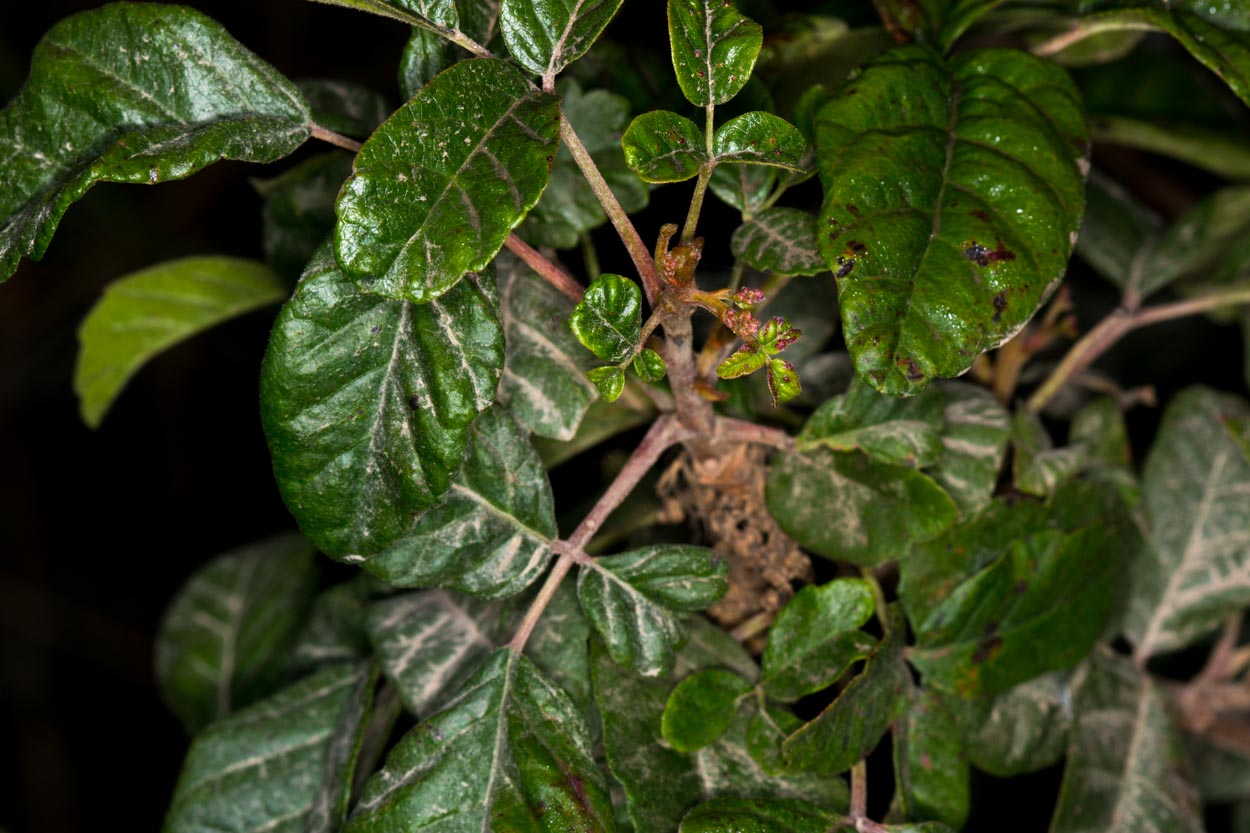 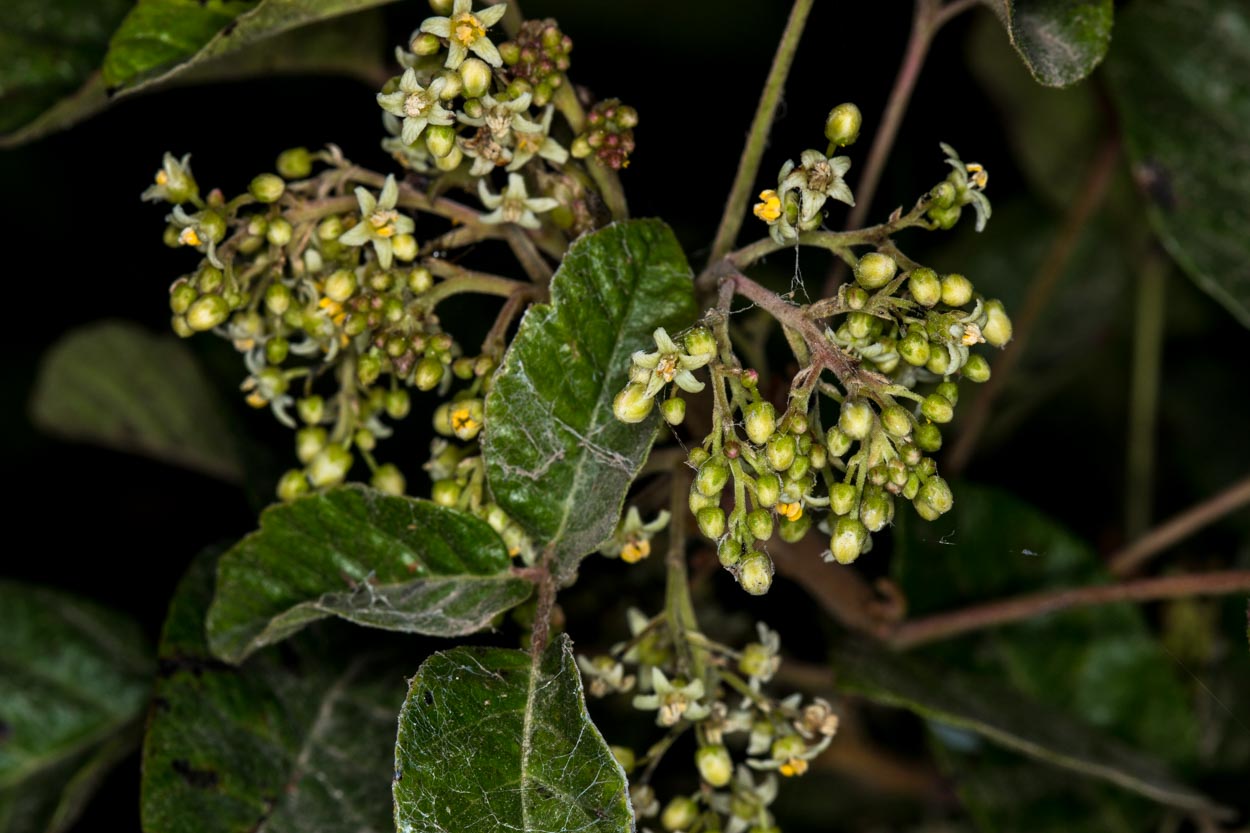 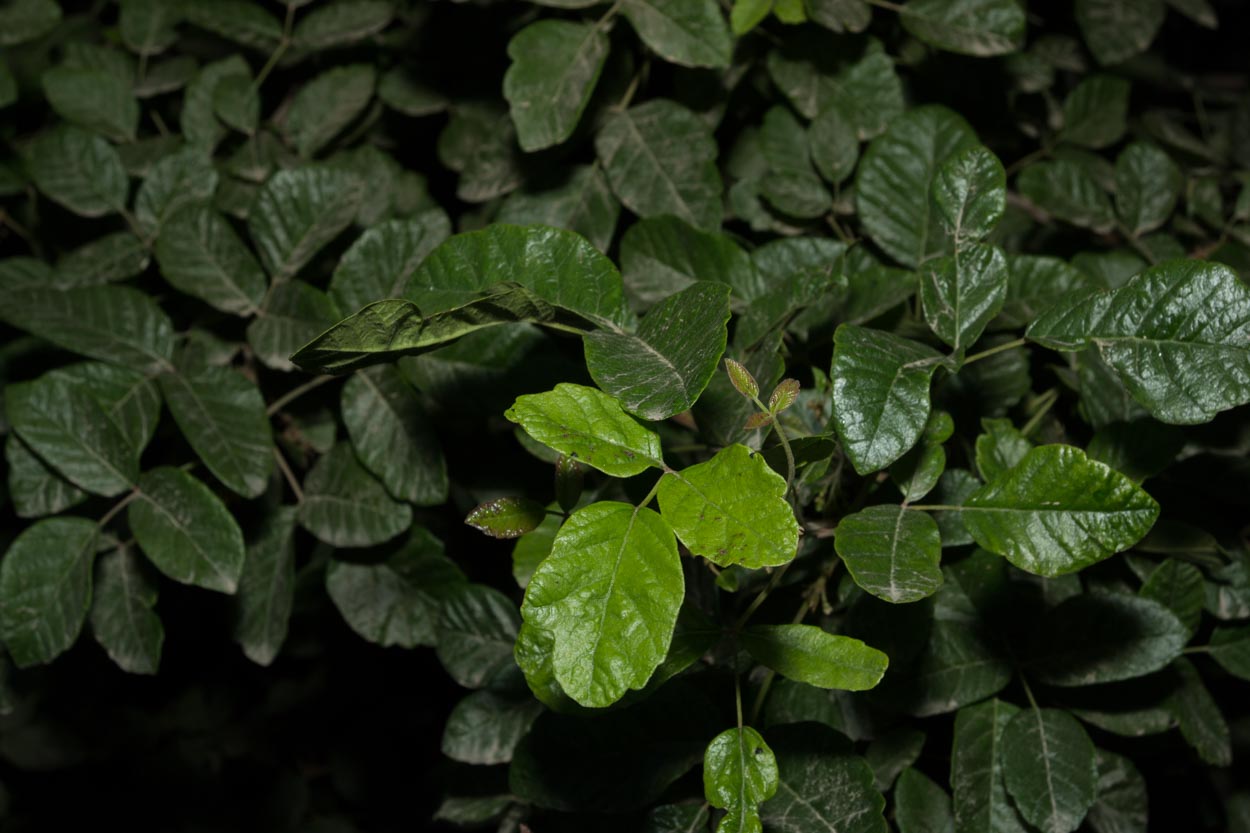 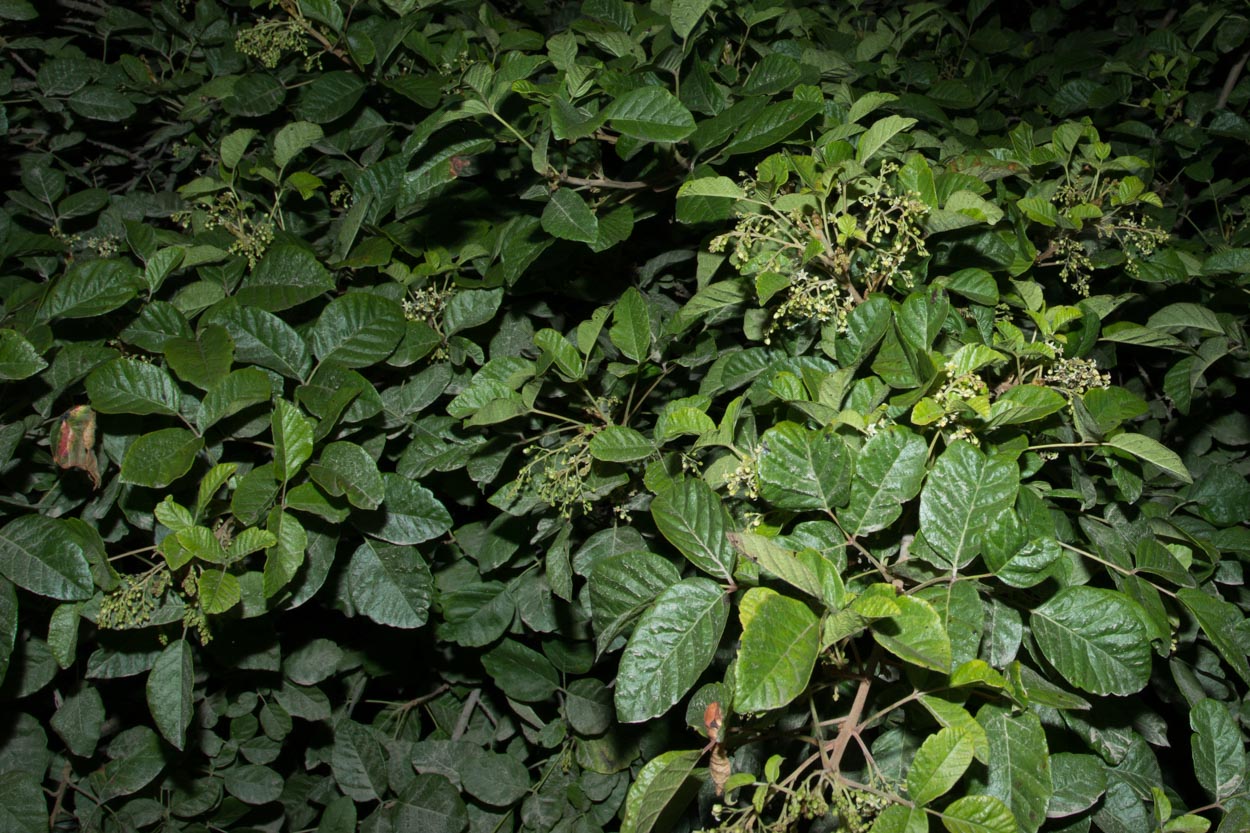 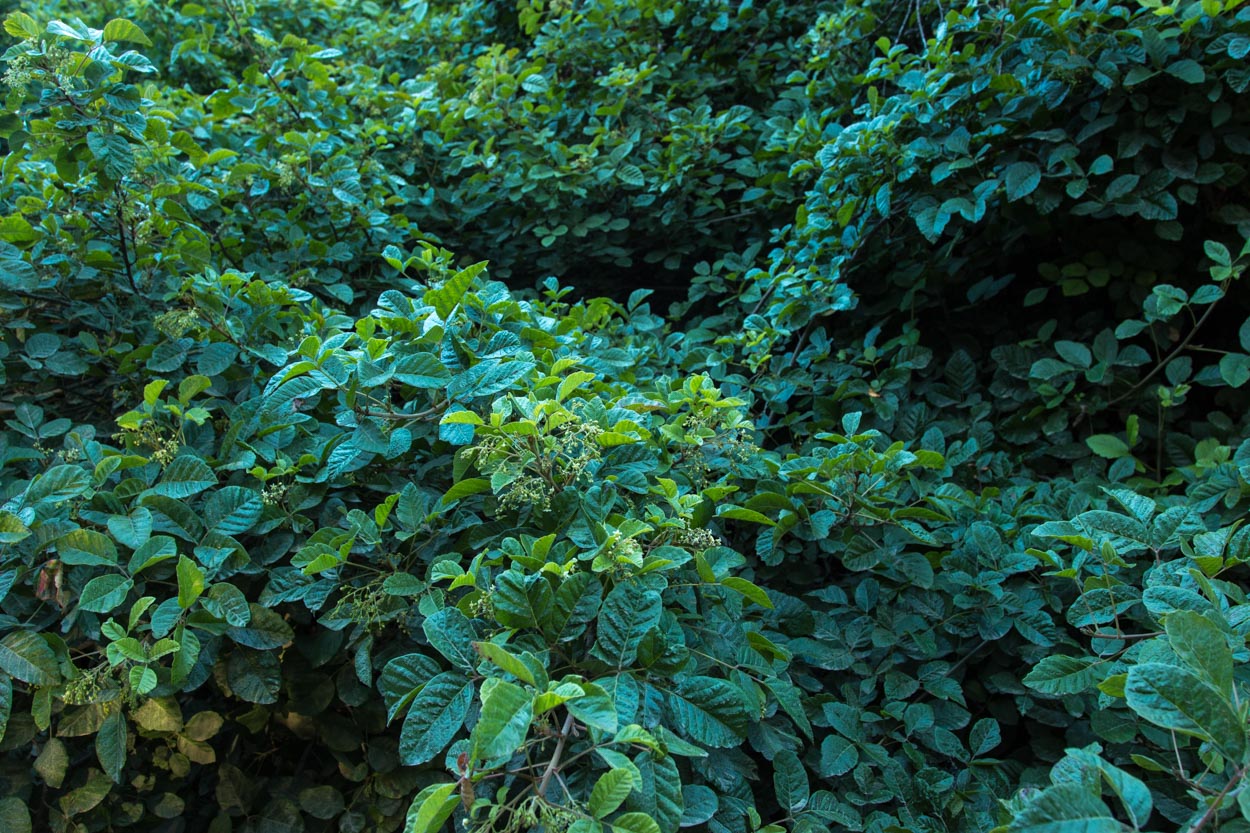 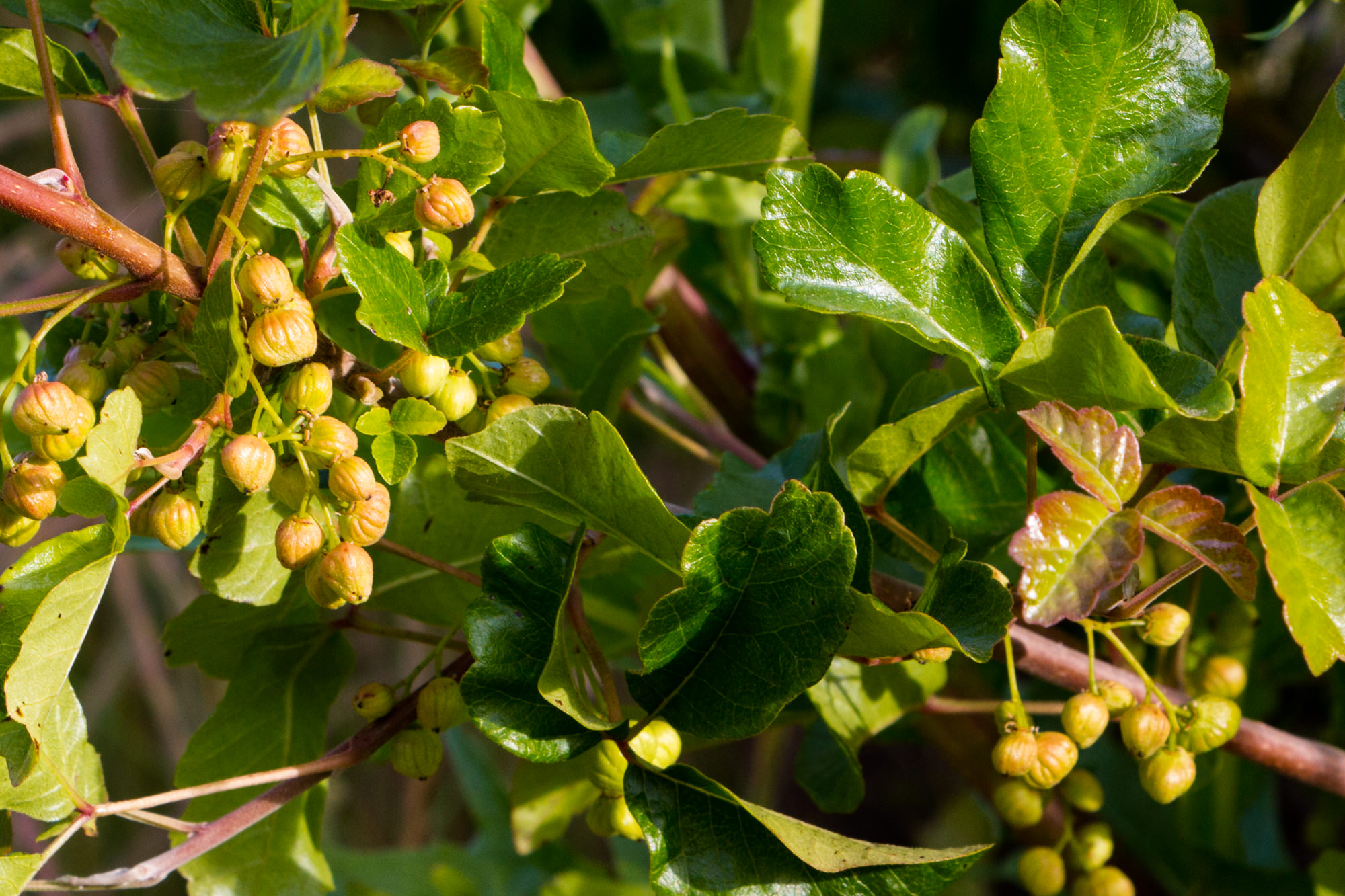 Poison oak - Toxicodendron diversilobum is a deciduous shrub that is quite common throughout the mountains and valleys of California. Tolerant of many soil types, amounts of rain and sunlight - this plant has the widest geographical distribution of any shrubsSource . As a rule Poison Oak is not found above 5,000 feet of elevation. In shady canyons and riparian habitats it commonly grows as a climbing vine with roots that cling to the trunks of oaks and sycamores. A National Park Employee told me that it is not uncommon for these vines to stretch from a source of water quite far up the side of a mountain! Poison oak also forms dense thickets in chaparral and coastal sage scrub, particularly in central and northern California. It regenerates readily after disturbances such as fire and trail maintenance. The plant spreads vigorously via rhizomes - an underground root system that spreads horizontally and sends out more roots and shoots. Seed gemination is assisted by birds dispersing the seeds. If you are hiking in the Santa Monica Mountains you are going to encounter this plant one way or another! The old adage "Leaves of Three, let it be" has been shortened from its original form. Most of us omit "berries white, a poisonous sight". Poison Oak has male and female plants and flowers in the late Spring. Interestingly, in the early part of Spring the leaves appear shiny and waxy.

During late Summer, the leaves turn various shades of red and yellow. The rash from Poison Oak can be caused when there are leaves on the plant and more importantly when there are no leaves because the urushiol resin is found in the stems and roots of the plant. There has been some research indicating that leaves shed by the plant do not contain urushiol because the plant re-absorbs the oil - not sure I want to test that theory out!

Most every person who hikes, rides, climbs or works in the Santa Monica Mountains has at one time or another had the rash caused by brushing against this plant. Most of the literature indicates that the more exposure to the oil (urushiol) from Poison Oak, the more likely we are to experience this rash. In many cases the more times you have the rash the quicker it appears after initial exposure and the more disruptive it is to your life. Unfortunately, the reaction in a small percentage of people can range from severe to life threatening (anaphylactic reactions). Fire fighters exposed to the ash of burning Poison Oak plants via inhalation have had to deal with lungs and nasal passages affected by the body's response to the the oils in this plant. The rash can appear in as little as four hours after initial exposure - search Google and you will find numerous sites that suggest four hours as a minimum - for me it has always taken several days. If you are leading a group of fellow adventurers into the local mountains, alerting your group to this danger becomes as important as your message regarding rattlesnakes and mountain lions.

What makes exposure to this plant so painful?


The resin in this plant is called Urushiol. The amount of urushiol it takes to cause a reaction is measured in nanograms (one billionth of a gram). Most sensitive people react in the 100 nanogram range. - enough to fit on the head of a pin! One doctor has estimated that it would take only one ounce of urushiol to cause a rash on everyone on the earth! For those who are allergic, this oil causes a serious reaction - the rash is the result of your body's immune system fighting against this invader. Your body's T-Cells fight this invasion like a crazed weasel. These cells order your body's immune system to cause the swelling, release the weepy fluids oozing from your skin, release a large amount of Histamines (which causes the itching) - a case where overwhelming force eventually solves the problem at hand and the misery you feel while waiting for this to disappear is but collateral damage! If you talk to enough people, you will hear many different solutions of how they treated their Poison Oak, you may hear that that the Native Americans were immune to the effects of Poison Oak, but this seems doubtful when you read about all the treatments Indians used for their rashes. Which brings us to-

How do I make this rash go away!
Tecnu, Zanfel, Calamine lotion, Aveeno and Benadryl can help reduce the itching. Zinc Oxide, baking soda and witch hazel can help dry the rash and reduce the oozing fluids coming from the rash. Native Americans tried many different things from Jewelweed, Mugwort, and Black Nightshade. If you do not have to go to the emergency room, Poison Oak will dissipate in one to two weeks.

How do I keep from getting Poison Oak?
Be Lucky! Not everyone who is exposed to this will get a rash - some data suggest that 15% of us are not sensitive. I hear from people who swear by homeopathic remedies for this. What if you are not sensitive to urushiol and you take this remedy - is that proof it works? Sensitivity may diminish as you get older. Stay away from it! Be vigilant. Learn where it grows. Marvel at the many forms it takes. Before you head out into the field you could, according to some researchers, spray on a deodorant with Aluminum Chlorhydrate - you will smell good and may even avoid the effects of unintentionally touching Poison Oak because the deodorant creates a barrier. I have heard that sunscreen works as well. If you touch Poison Oak wash the area immediately with an alcohol swab. Blot the oil. This oil is like Pine Tar and can be inactivated by flushing the area with water, urine, gasoline (Tecnu is a gasoline distillate). Do not use a washcloth - that will spread the oil into more open pores of your skin. Do not take a bath - imagine how much worse your reaction to this plant could be if you soaked in a tub of hot water with a microscopic dollop of urushiol!

I regularly remove Poison Oak from the trails in the Santa Monica Mountains. One episode that comes to mind occurred when I was using a pole saw to remove overhead limbs and numerous healthy Poison Oak vines. Imagine my shock when after cutting thru these vines, the cut ends came down and smacked me in the face when my mouth was agape. There were a few uneasy days before it looked like I was going to avoid the consequences. Occasionally, I will get a small rash where I missed washing - nothing like the time I scrambled off trail (lost or confused) in shorts during a California winter day! That was epic and not in a good way. My routine nowadays is to undress in the garage, place clothes into empty washing machine, notify my wife that I have been traipsing through some Poison Oak. Take a cold shower to rinse the dirt and Urushiol off of my skin. Wash each limb with Tecnu, wait two minutes and rinse off Tecnu. Look at calendar and begin hoping that I removed every single trace of the oil from my gear and me! Other adventurers bring rubbing alcohol packets with them and use them should contact with Poison Oak be made. Don't let this common plant keep you from enjoying the great outdoors!