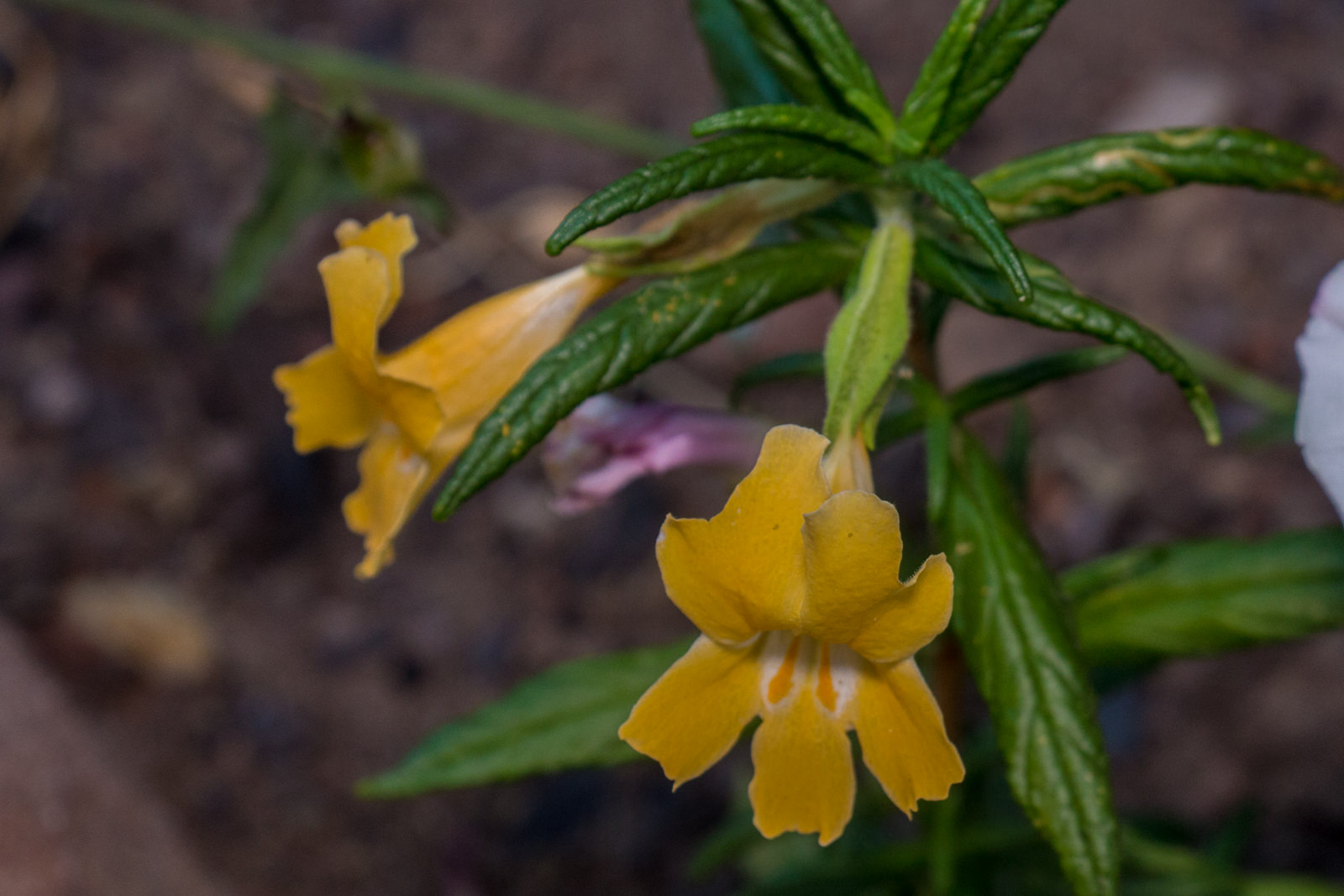 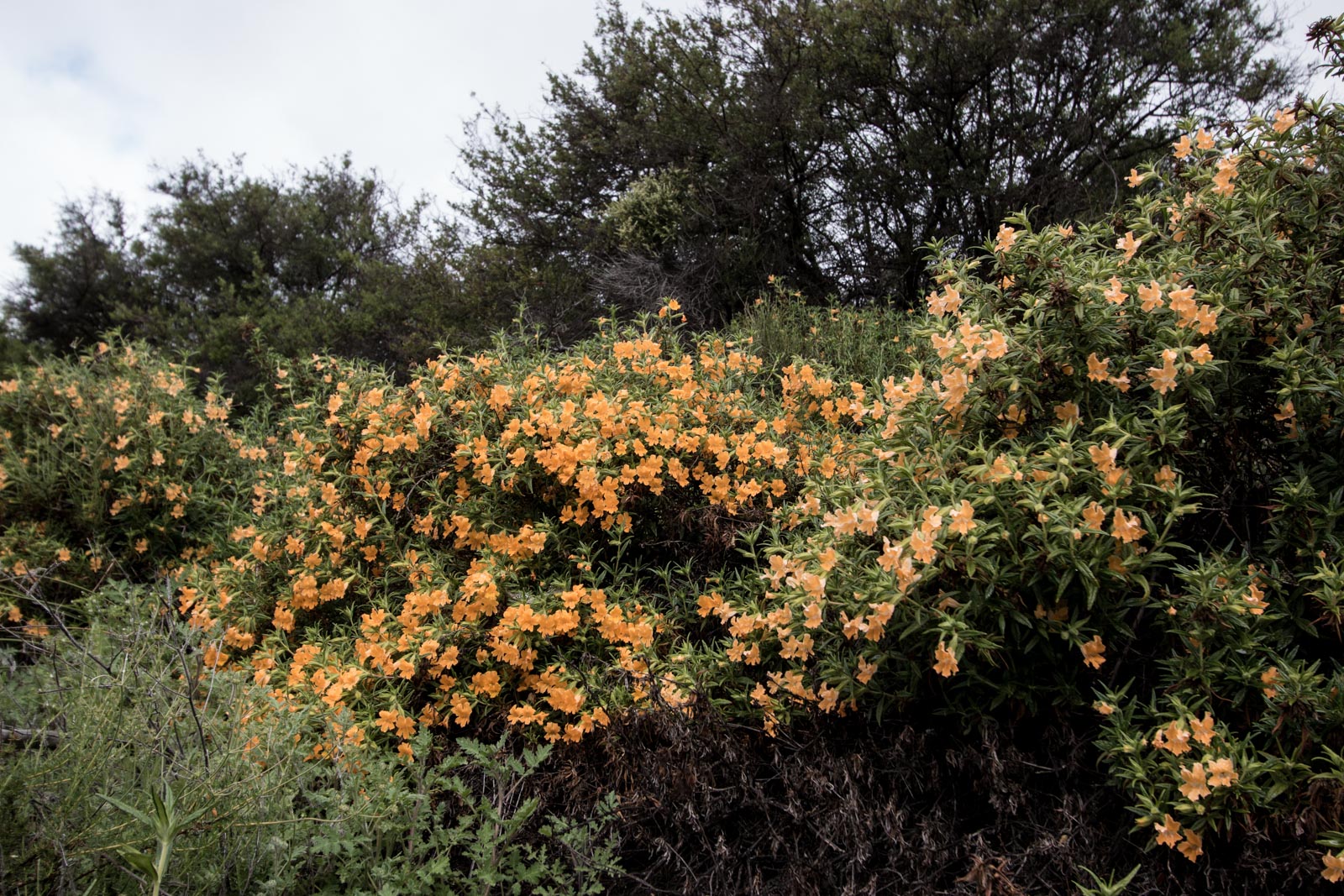 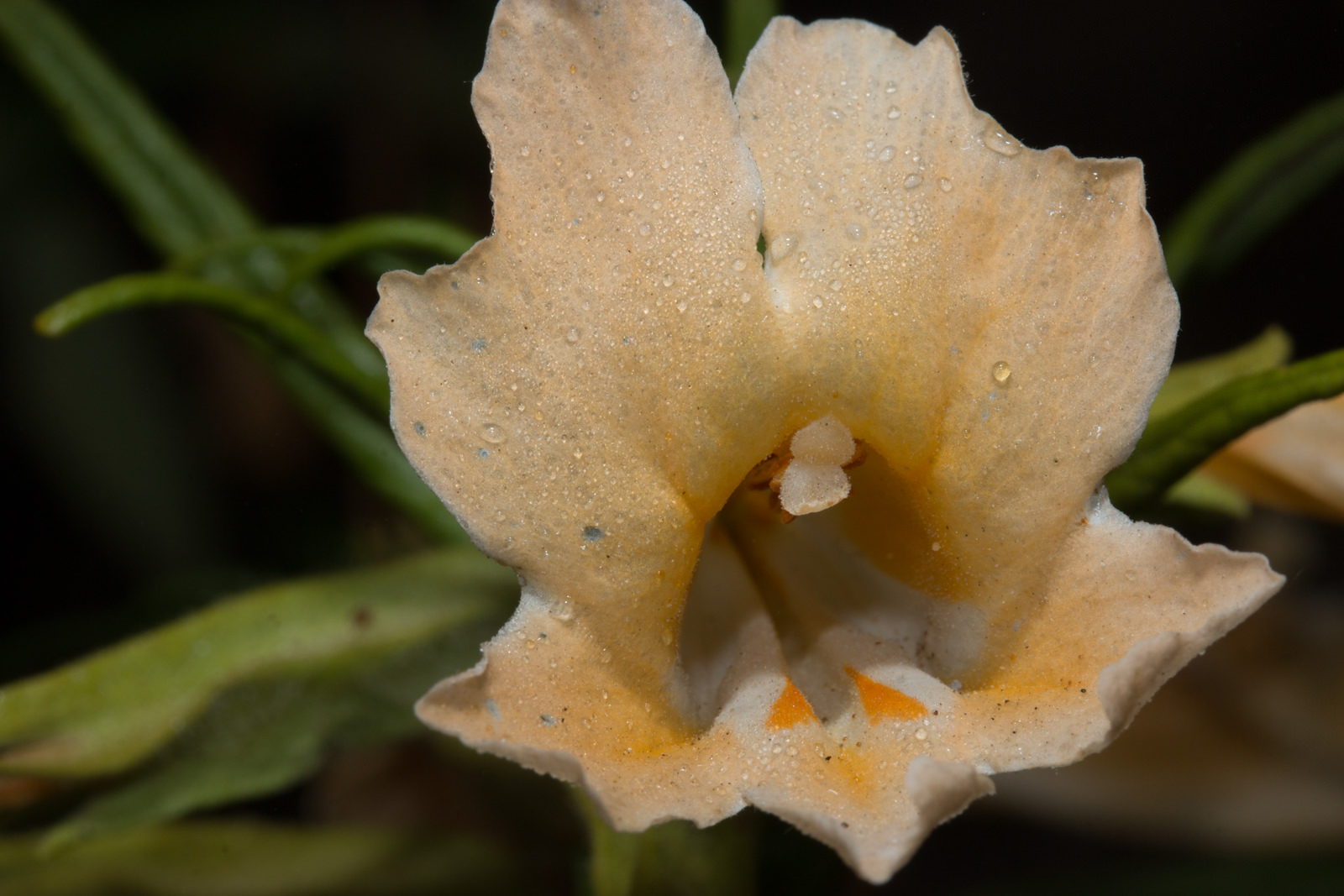 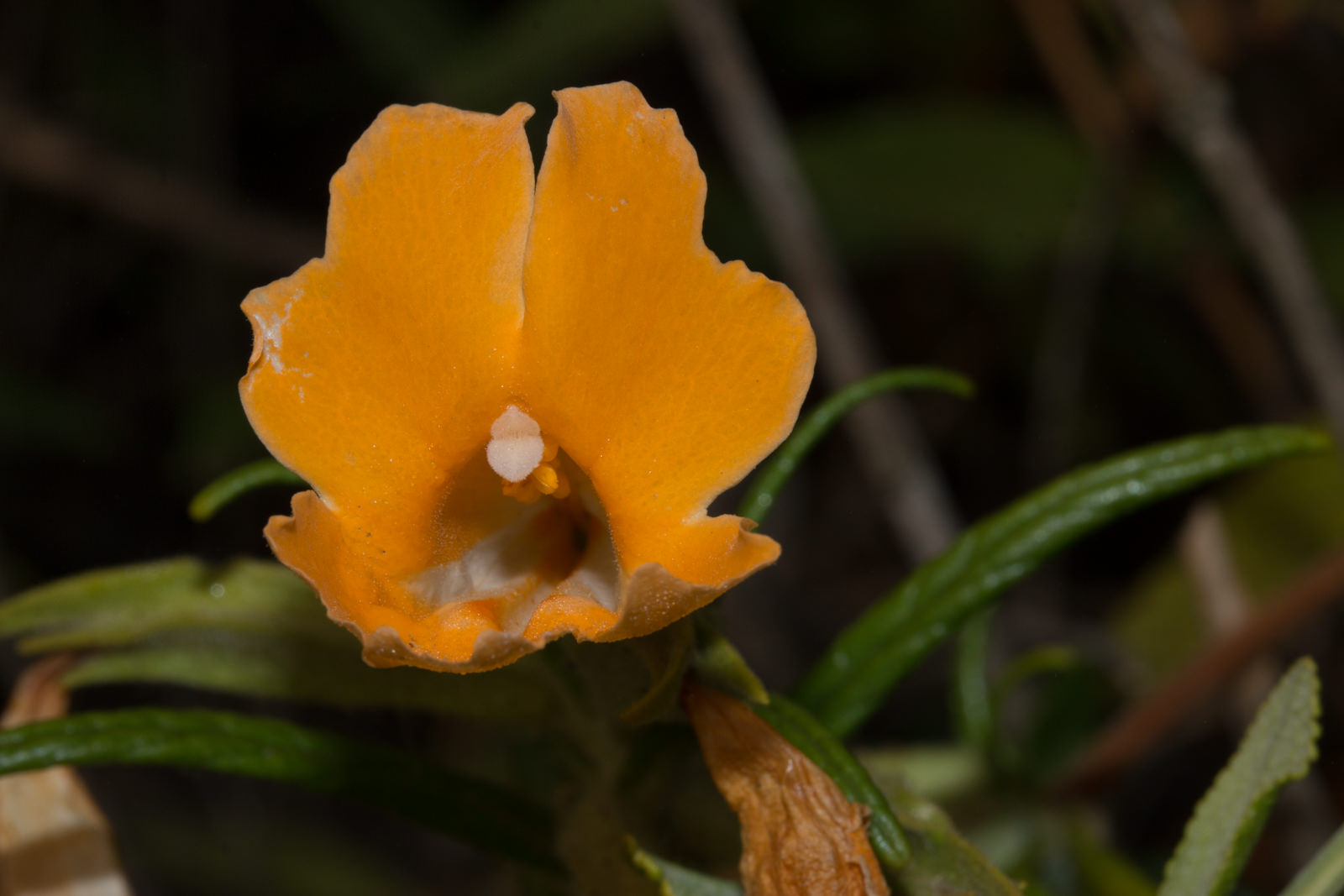 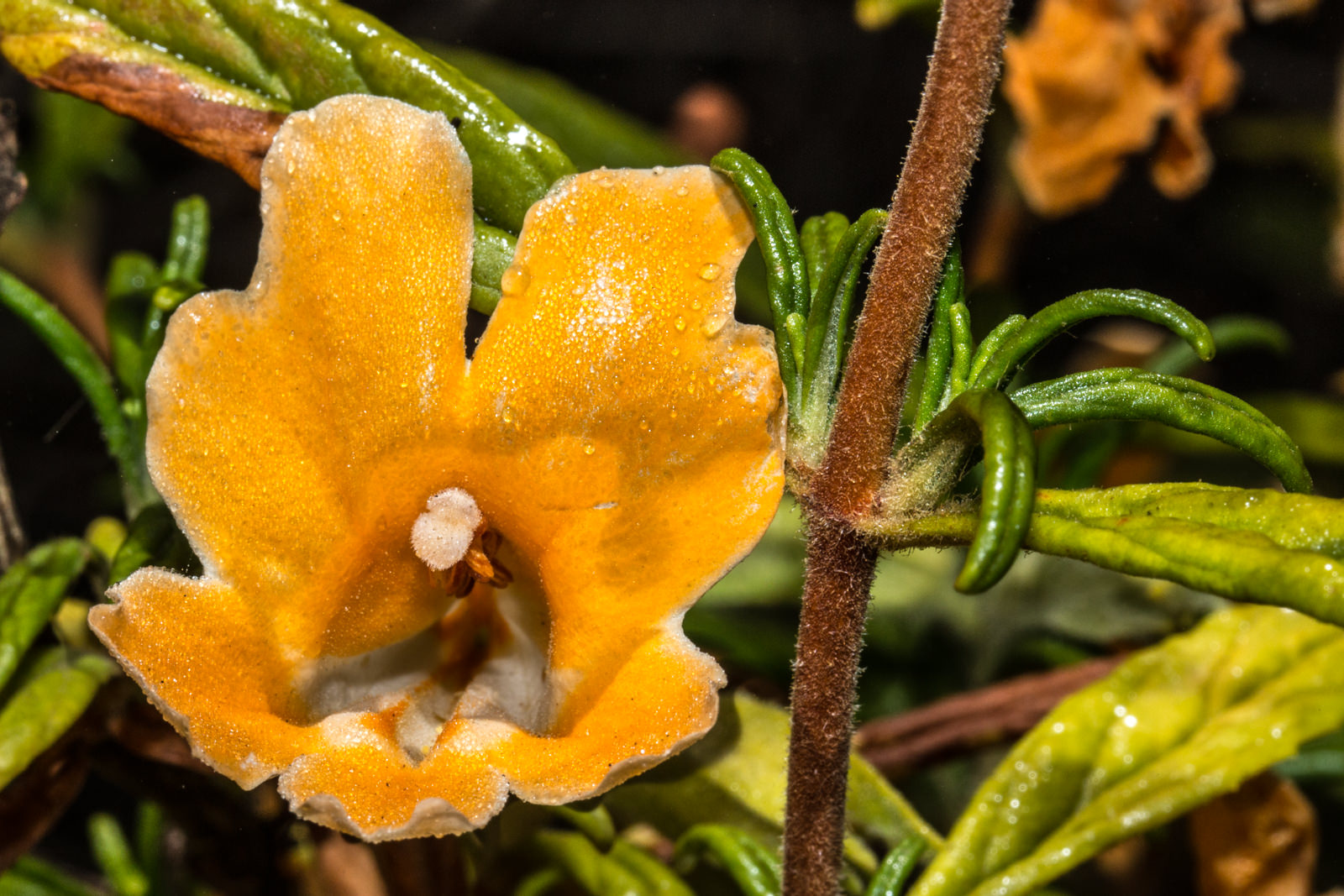 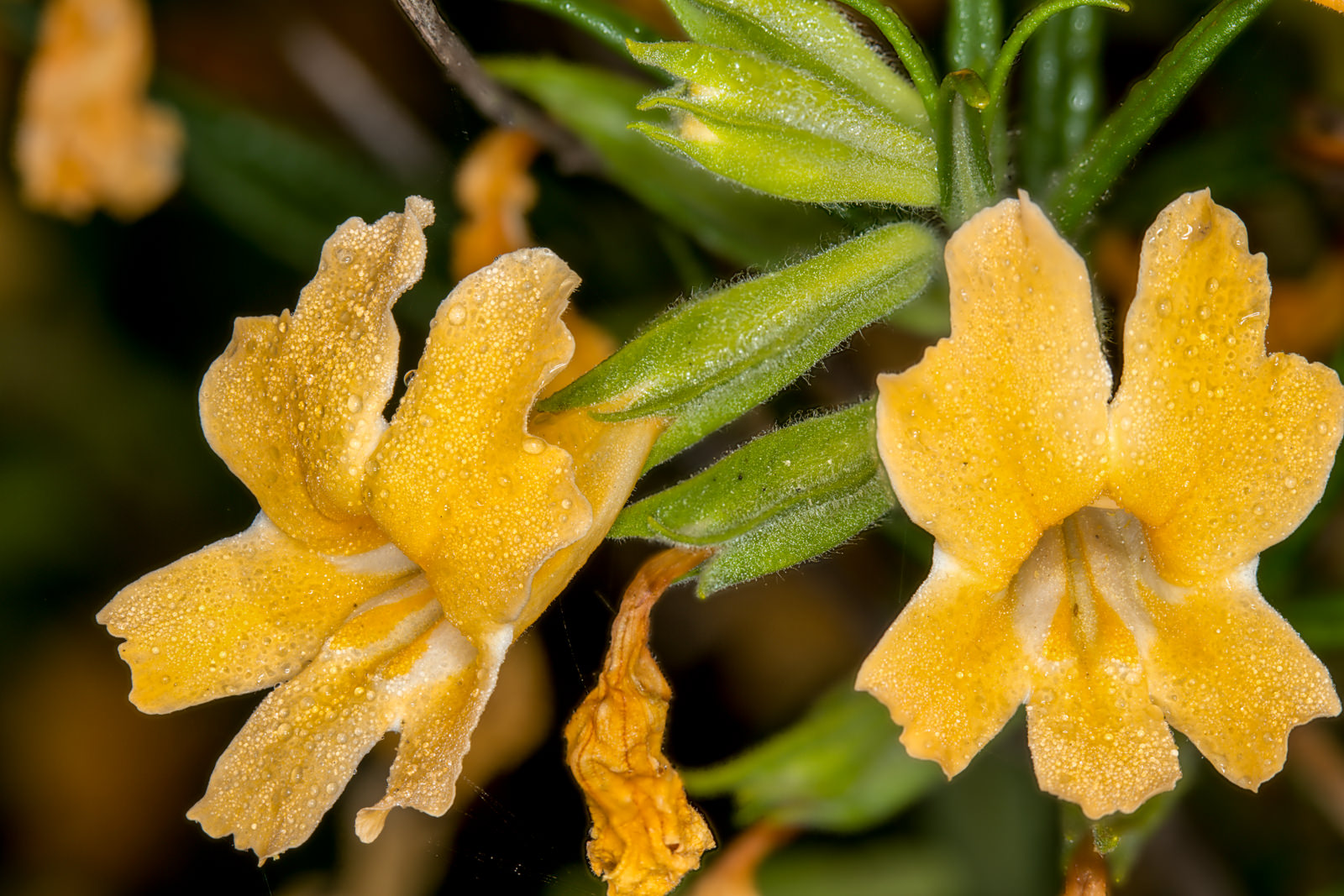 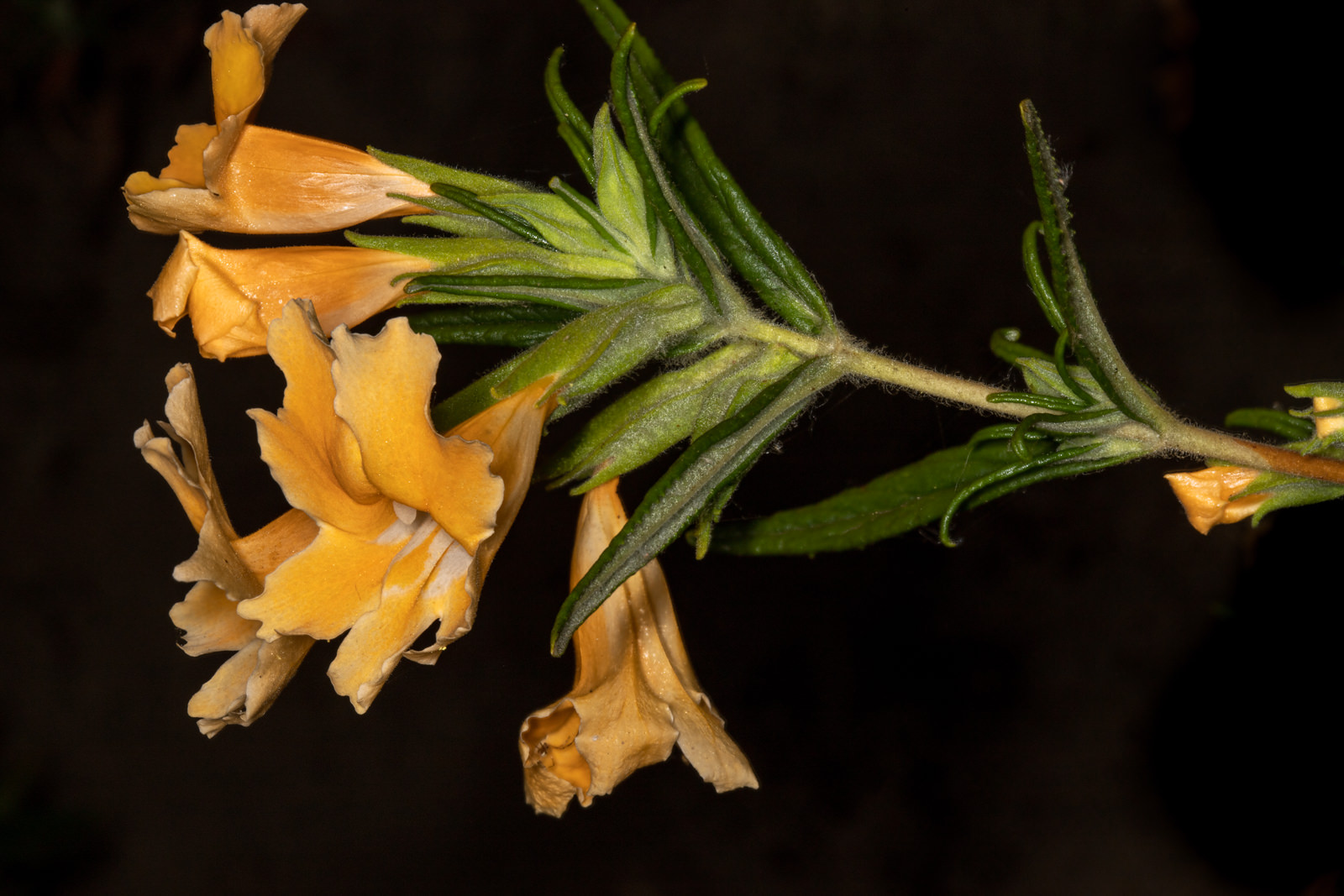 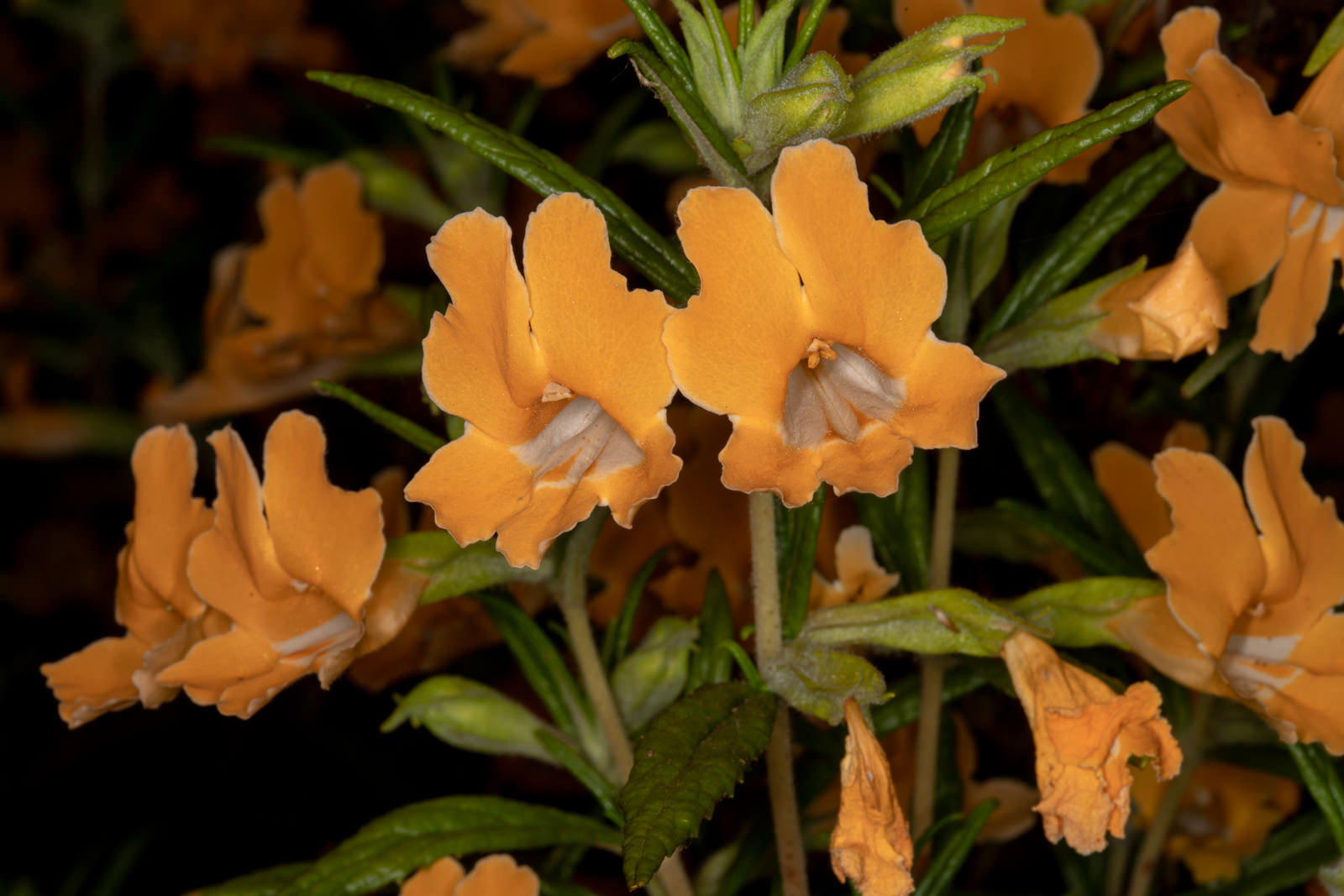 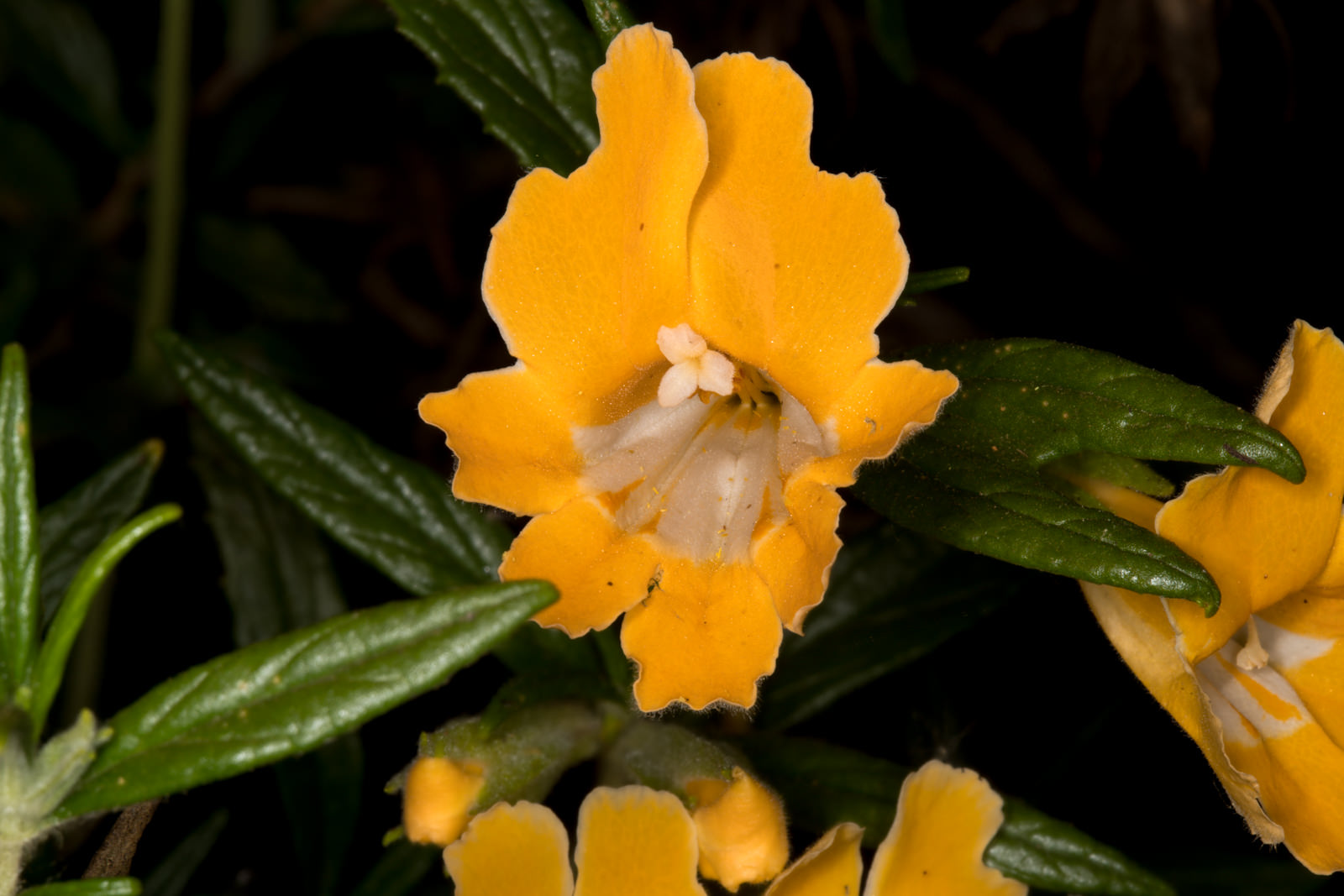 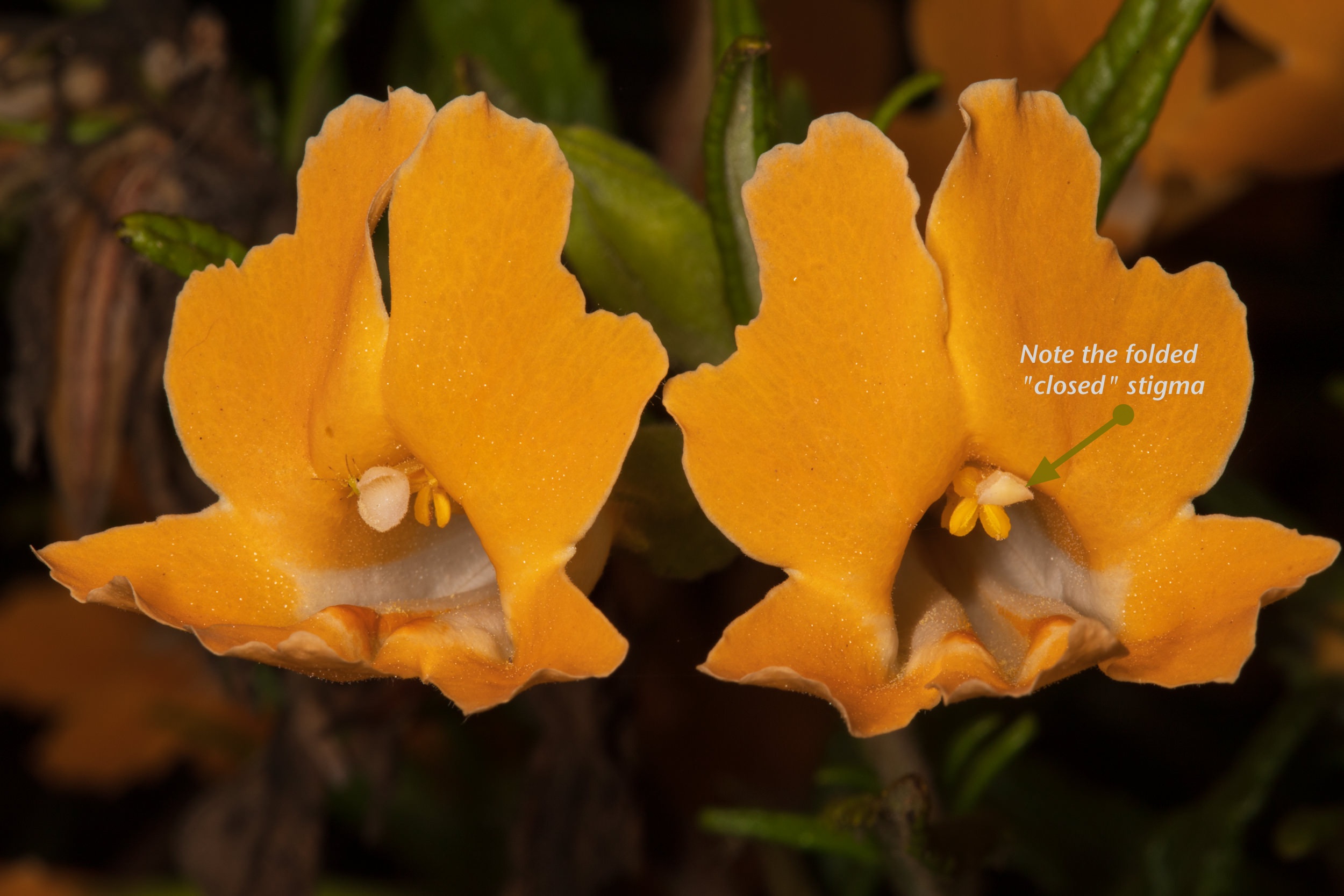 Commonly known by at least two names, Sticky Monkey flower or Bush Monkey Flower is the orange to yellow flower that brightens our slopes in the late Spring. The botanical name has been changed to reflect recent research. Mimulus aurantiacus is now Diplacus longiflorus. Monkey Flowers have been divided into two groups - based upon where they are found. The Creek and Scarlet Monkey Flowers live in Riparian environments while Bush and Yellow Monkey Flowers along rocky slopes. This plant is sticky, brightly colored and an ideal first flower that is not a Lupine or Poppy for a budding naturalist to learn to identify. Does the flower look like a Monkey face? Not that I can tell. Is is particularly beautiful? Maybe! It is however, ubiquitous along many trails.

There is considerable variation in this California native plant - likely related to where it grows and has adapted. Colors vary from red to butterscotch, bronze, white and many shades between. Another difference is the presence or lack thereof of small hairs along the plant. Basic traits of this woody perennial are that the leaves are narrowly elliptical or lanceolate, usually less than four inches (10 cm) long. Leaves appear opposite of each other leaf on the stem. Leaves are the same shade of green (top and bottom) or close enough. Leaves are glandular, and contain a resin which gives them a sticky feel; this may keep the hungry Variable Checkerspot Butterflies for which this is a host plant from consuming the plant. In periods of drought the leaves are often shed.

Flowers contain five petals fused into a two-lipped corolla with two petals up and three below which and thus symmetrical bilaterally. The corolla is pleated/ridged. For astute readers of these pages you might notice this ridge/pleat is also found in Yellow Monkey Flower Diplacus brevipes. Four anthers and a pistil with a conspicuous two part stigma make up the reproductive organs. Typically pairs of flowers will grow on each segment. Peak bloom period is March to August.

The stigma is interesting. When touched by a pollinator or budding naturalist it will fold closed. If pollination had taken place it would remain closed - likely a signal to pollinators to move on to another flower. Select the last image for an example of this; it shows an unpollinated flower and a pollinated flower side-by-side. If a picture is worth a thousand words....

Link to Calfora.net - the best source of this fascinating information!
Name Origin: Diplacus: from the Greek di, "two, double", and plax or plakos, "a flat round plate, tablet or broad surface." Thomas Nuttall's 1838 publication On Two New Genera of California Plants in which he named this genus says "The generic name alludes to the splitting of the capsule, attached to each valve of which is seen a large placenta, and under its edges are found the slender subulate seeds." (ref. genus Diplacus) longiflora/longiflorus refers to the length of the corolla.