Plant of the Month - Toyon 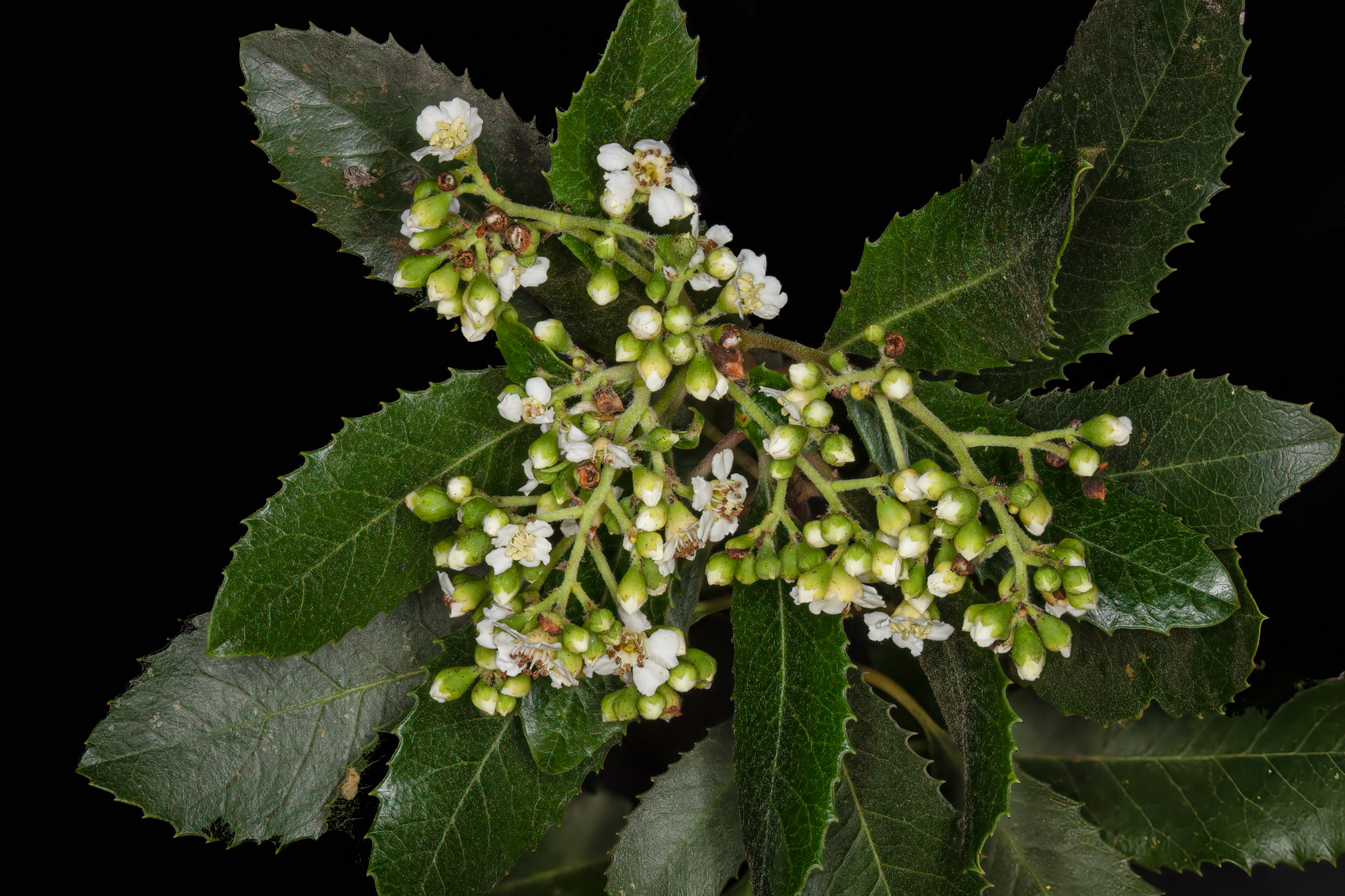 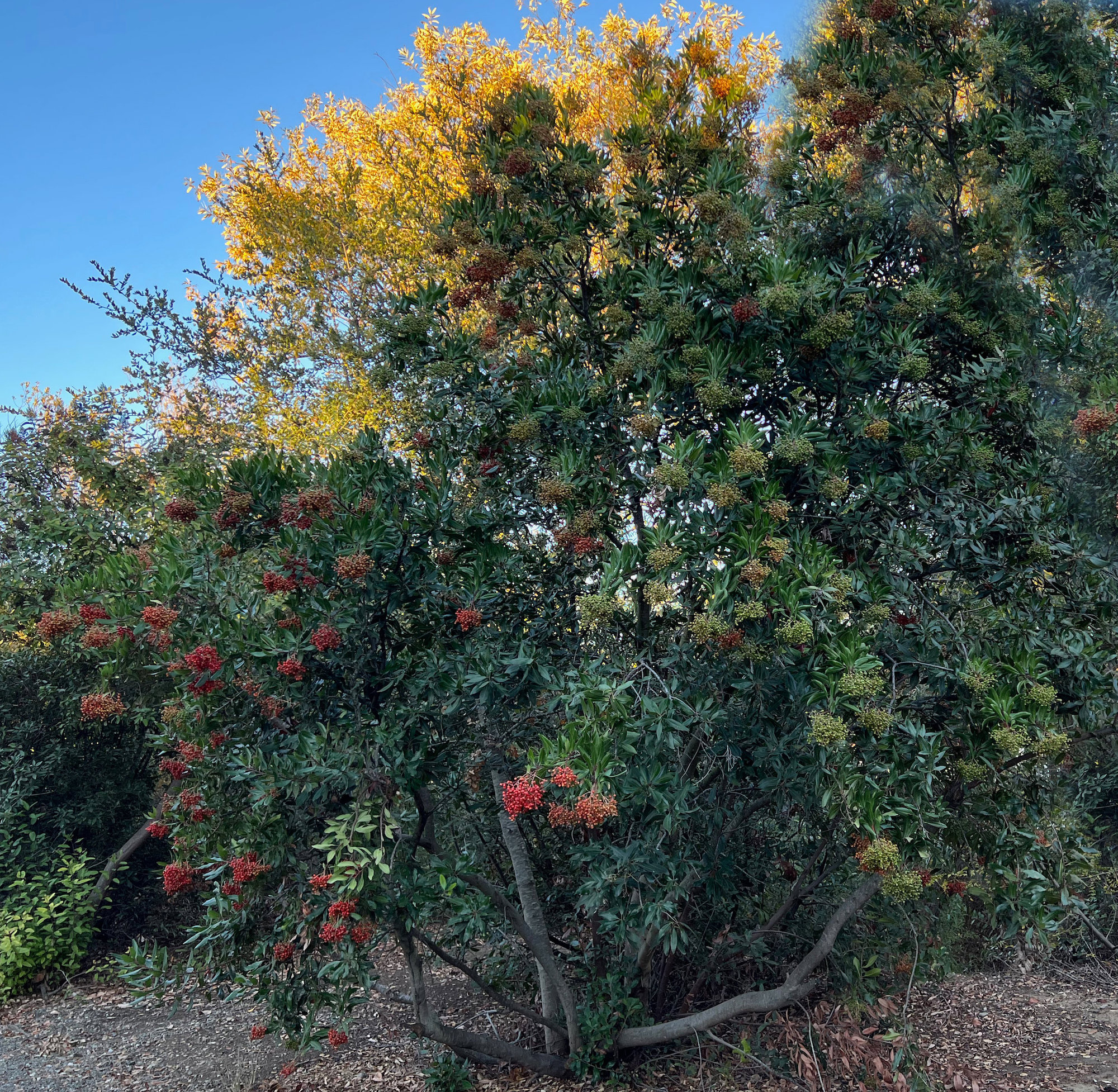 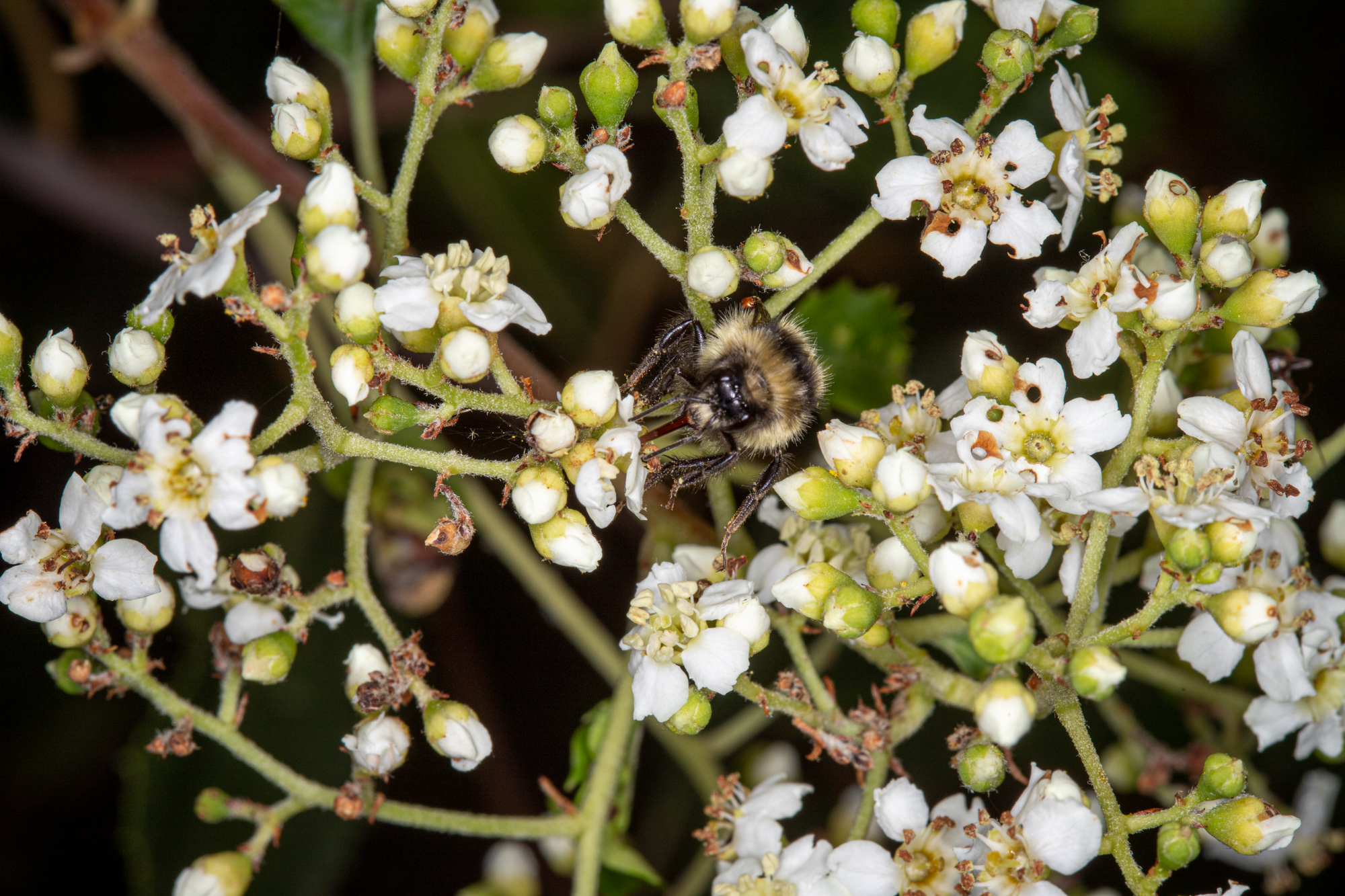 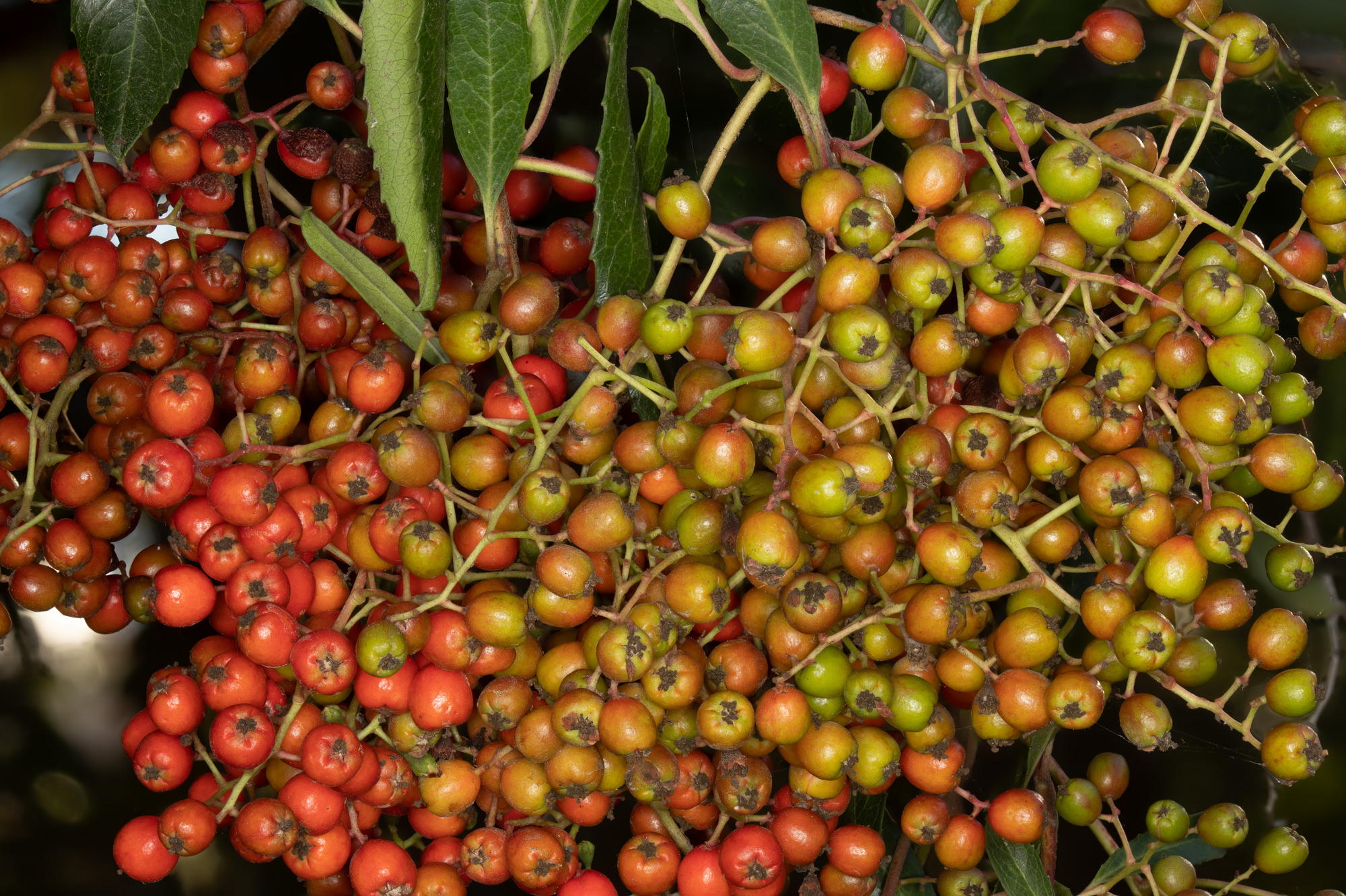 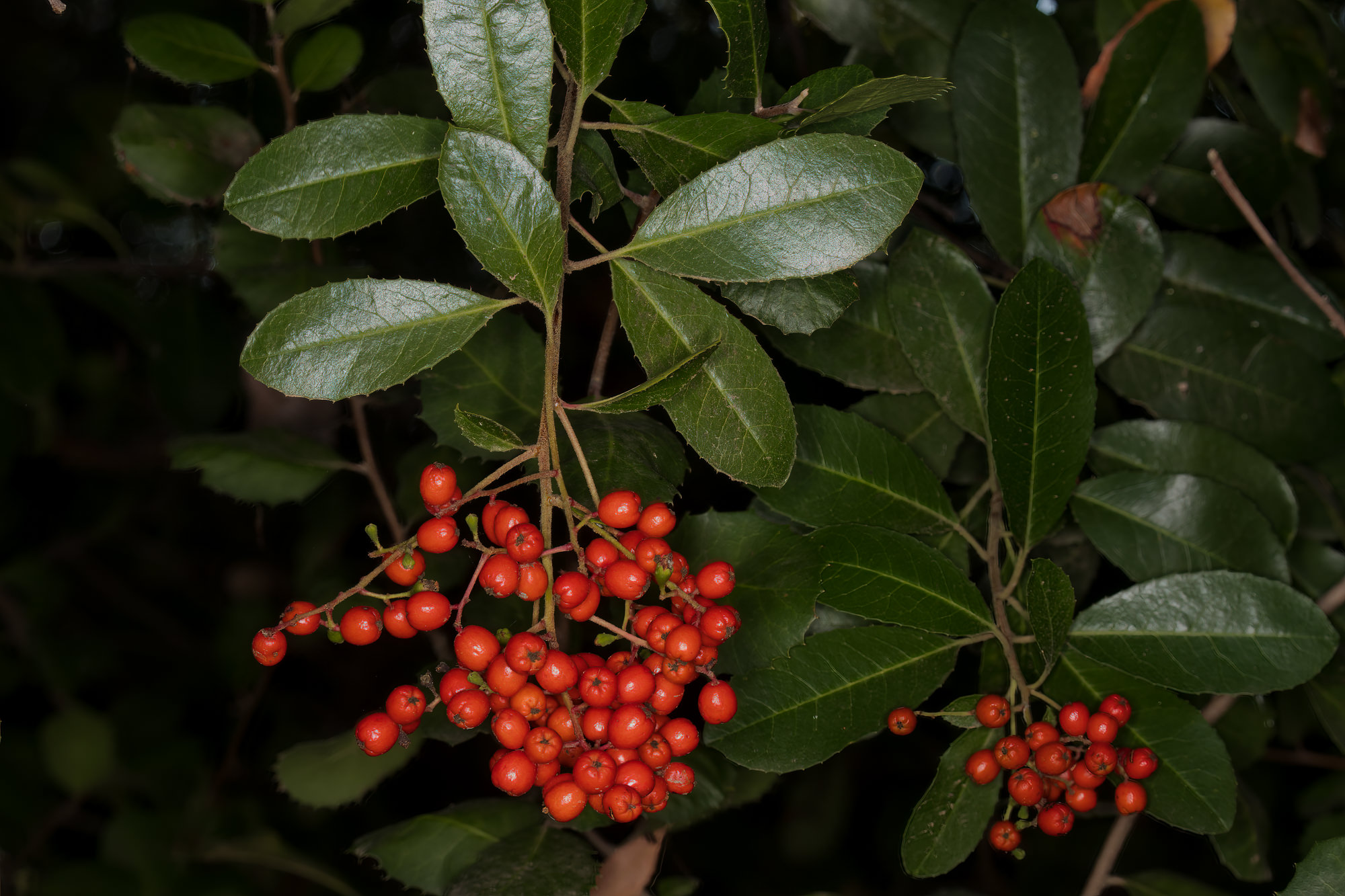 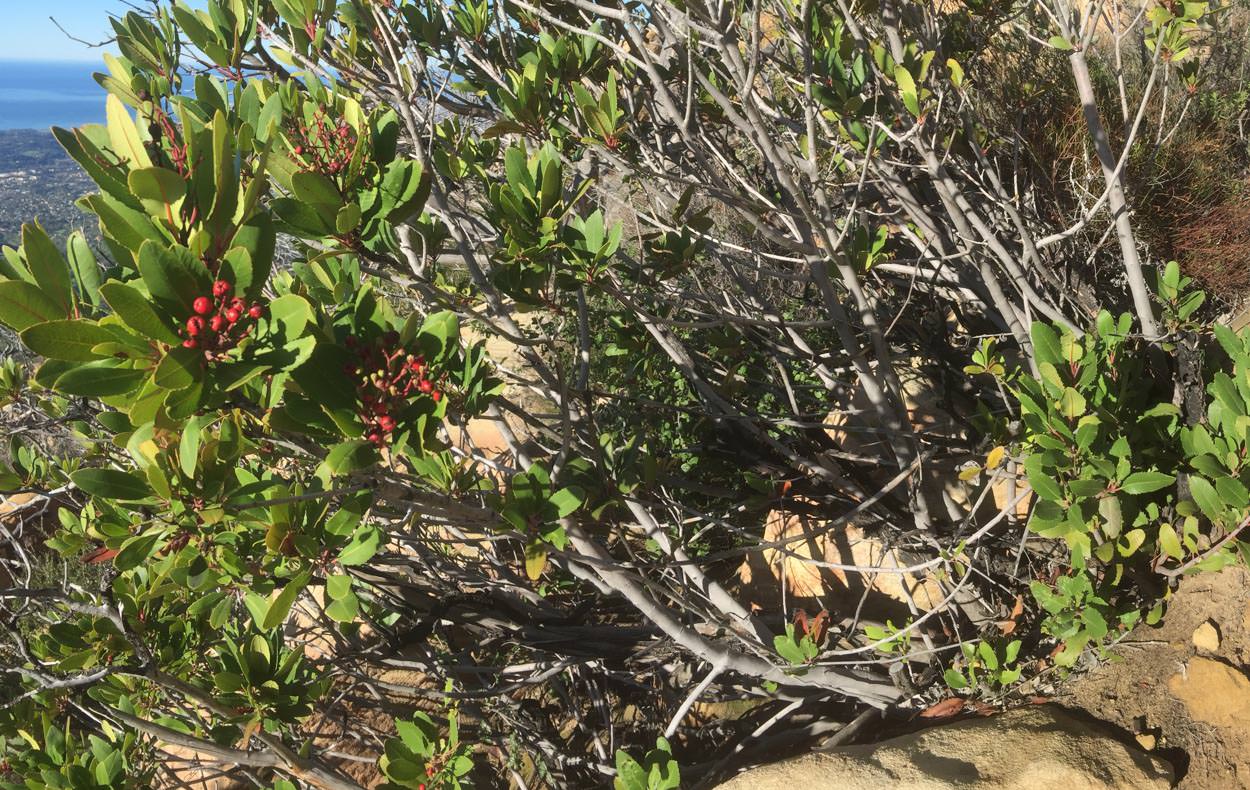 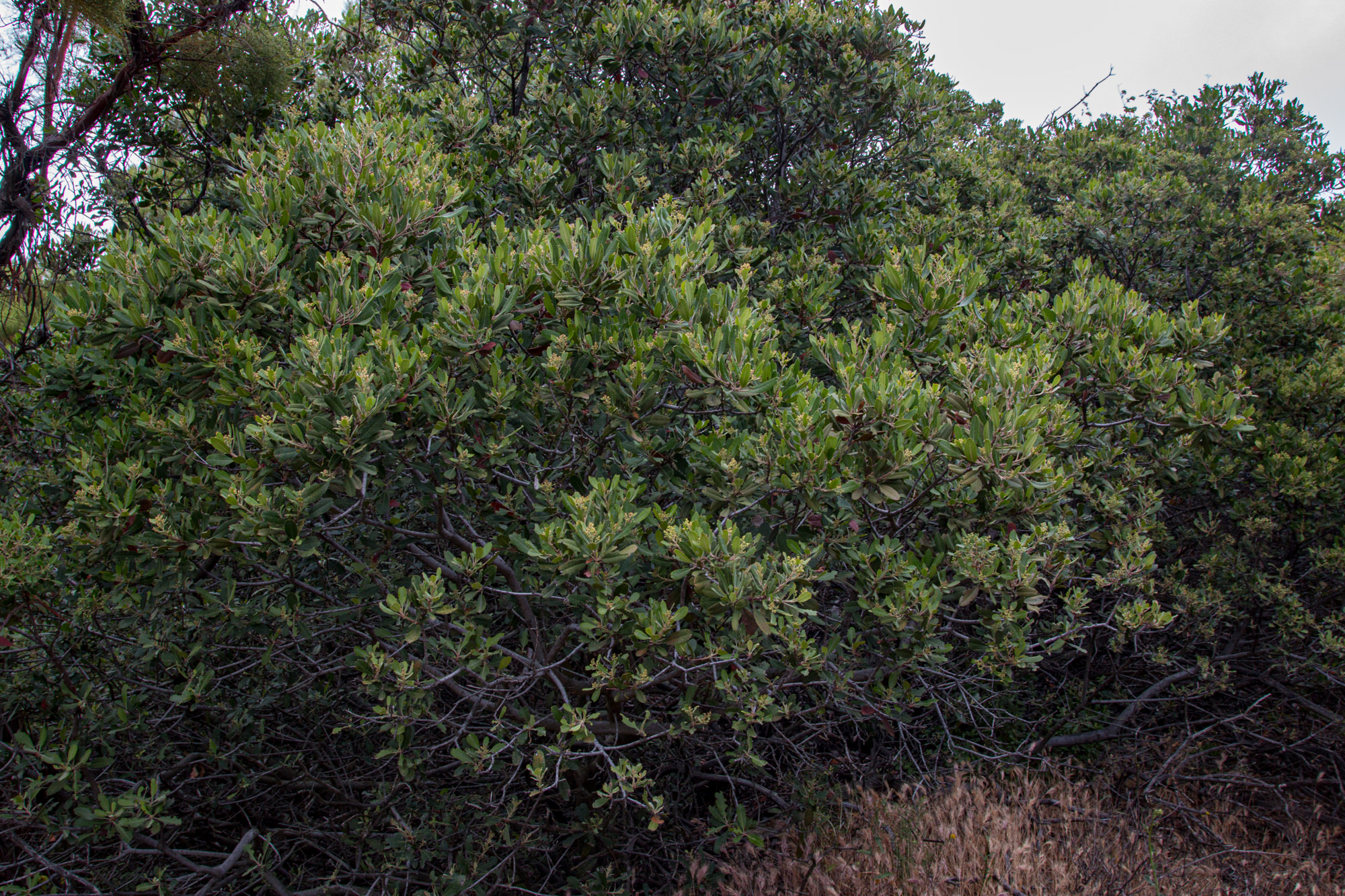 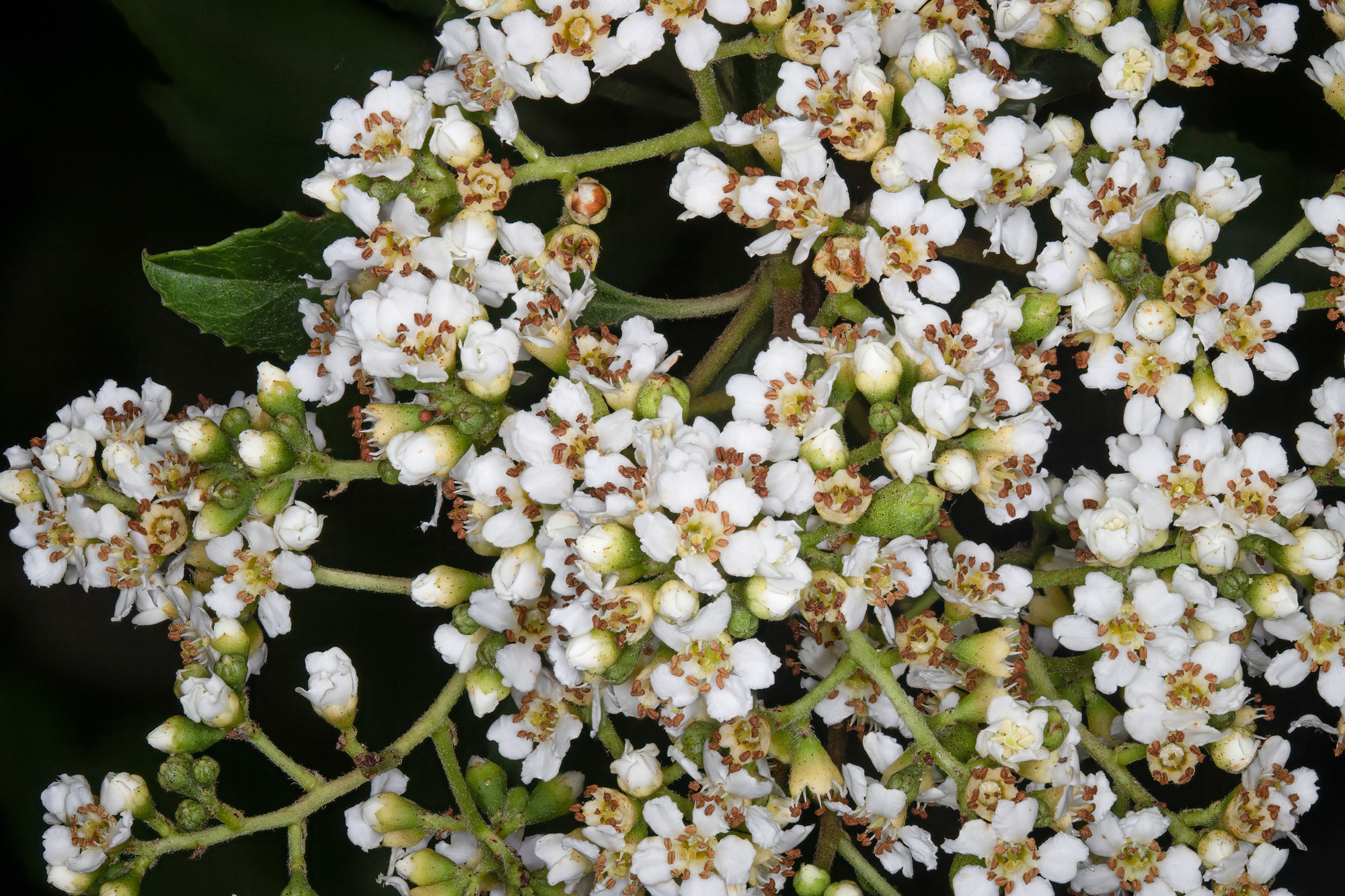 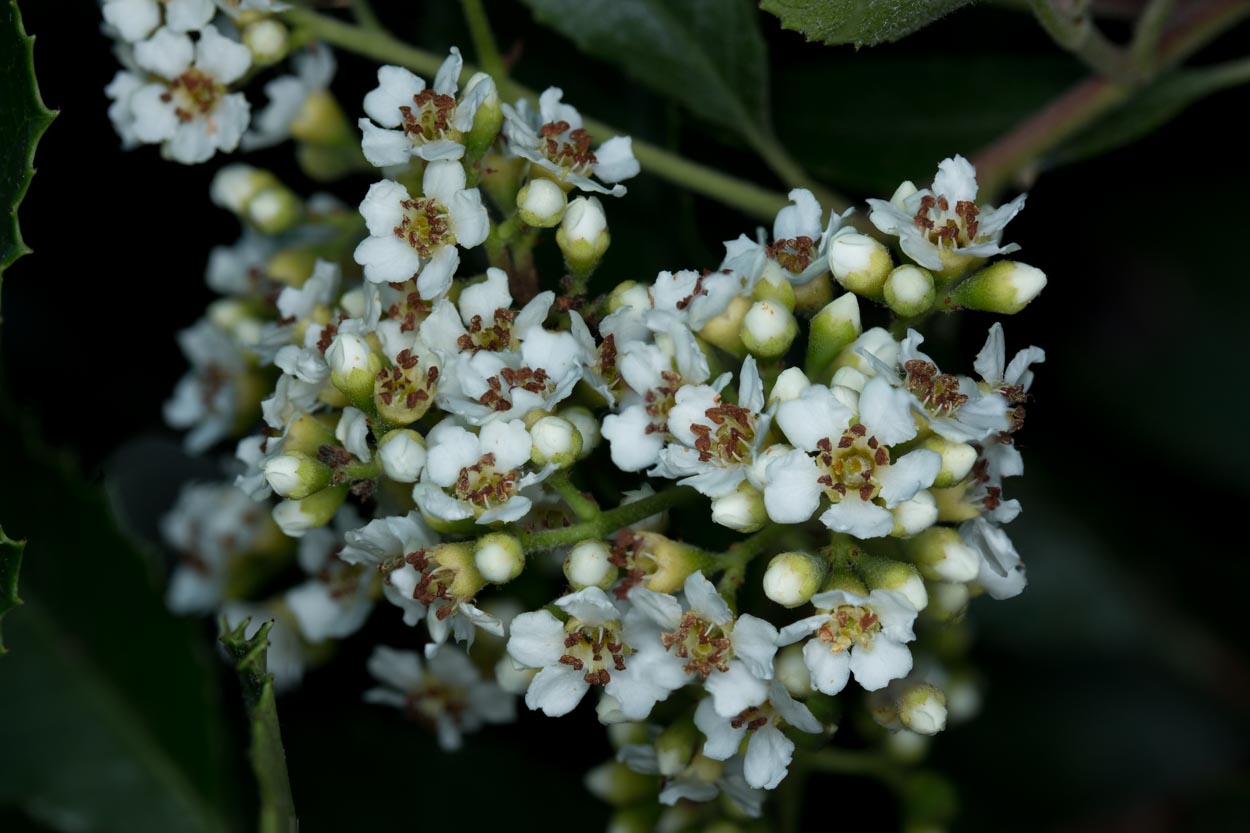 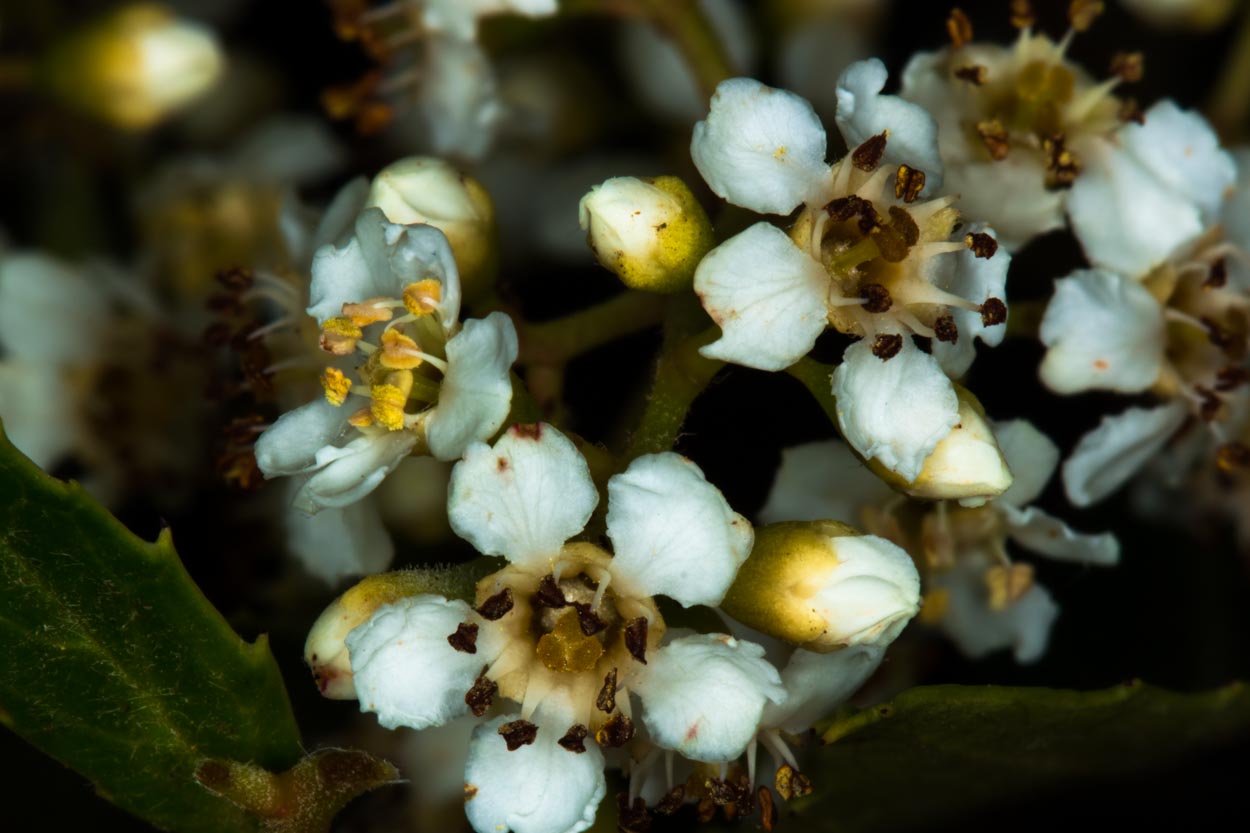 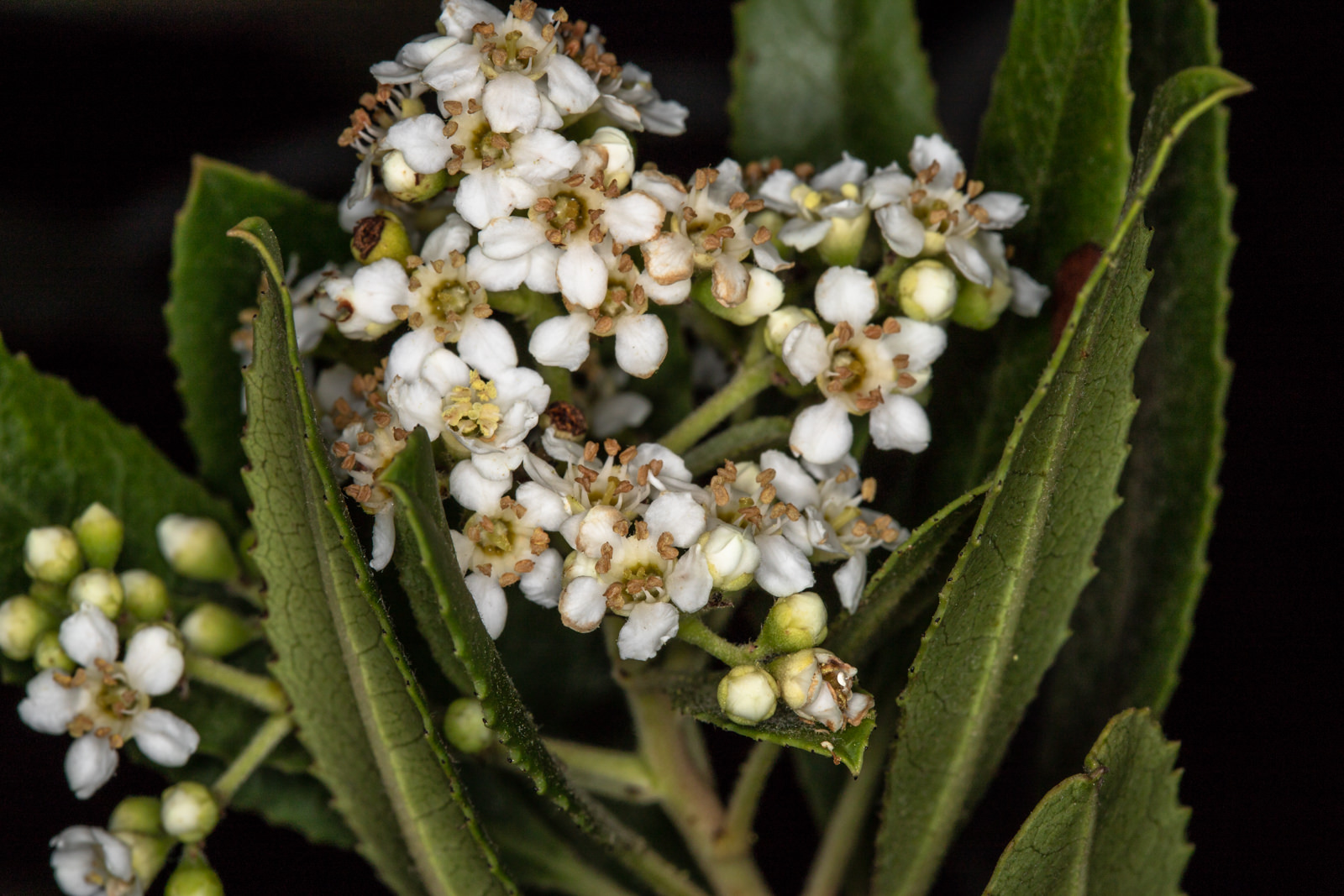 Heteromeles arbutifolia, commonly called Toyon, is most notable when the days shorten and weather turns colder. The small, bright red berries add a splash of color to the slopes of our local mountains this time of year. It is said that Hollywood got its name due to this plant's resemblance to holly.

Toyon's thick, waxy and oblong leaves are 2-4 inches long with pointed teeth that spiral alternately up the plant's stems. The waxy coating of the leaves reduce the amount of water lost through transpiration (evaporation of water from plant leaves) and allow the plant to remain evergreen. Small, white perfect flowers (both stamen and pistil are present) containing five petals and ten stamens appear in summer and are pollinated by bees. The flowers are similar in appearance to Roses (they are a member of the Rose family). In late fall, these are replaced by pea-sized bright red berries, or pomes. These traits are shared by other plants in this wide and diverse family: apples, peaches, strawberries, plums and pyracantha.

The immature fruits contain cyanogenic glucoside - which is toxic to many living creatures - to protect developing fruits being consumed before the seed is ready to be dispersed. This is a similar chemical that Milkweed plants use. As the berries mature, the chemical is transferred into the seed. Several species of birds consume the fruits and in the process disperse the seeds.

Native peoples used the sweet and spicy berries in food and drink - not advisable nowadays as this plant is protected by State law - but first they had to remove the bitter taste by roasting or boiling them.

Sometimes the pomes (fruits) are yellow instead of red, and there is reportedly a variation of this plant growing on the Channel Islands with larger berries.

Fire Response: Following a fire, Toyon is well prepared to jump start the re-growth process. In fact, vigorous sprouting can occur within ten days of a fire - a bit of moisture (dew) is required for this. Toyon has a root crown with dormant buds along with some stored carbohydrates. This plant is considered an obligate sprouter. Sprouting from seed after a fire is not the plants's first choice. Seedlings require a combination of rain (above normal years are optimal) and a bed of composted leaf litter to succeed. Much of this info came from a Santa Barbara City College web page discussing native plants: For more Info

This plant can be included in your garden; indeed you may notice it incorporated into the landscaping in our cities. Appearance will be improved if provided more water and properly trimmed.

Some of these photos were taken in late November, 2005 along the Mishe Mokwa trail. Chaparral Currant and Bay were also found to be in bloom at this time. So begins our first Plant of the Month page where we feature plants that are just waiting to be identified and appreciated!