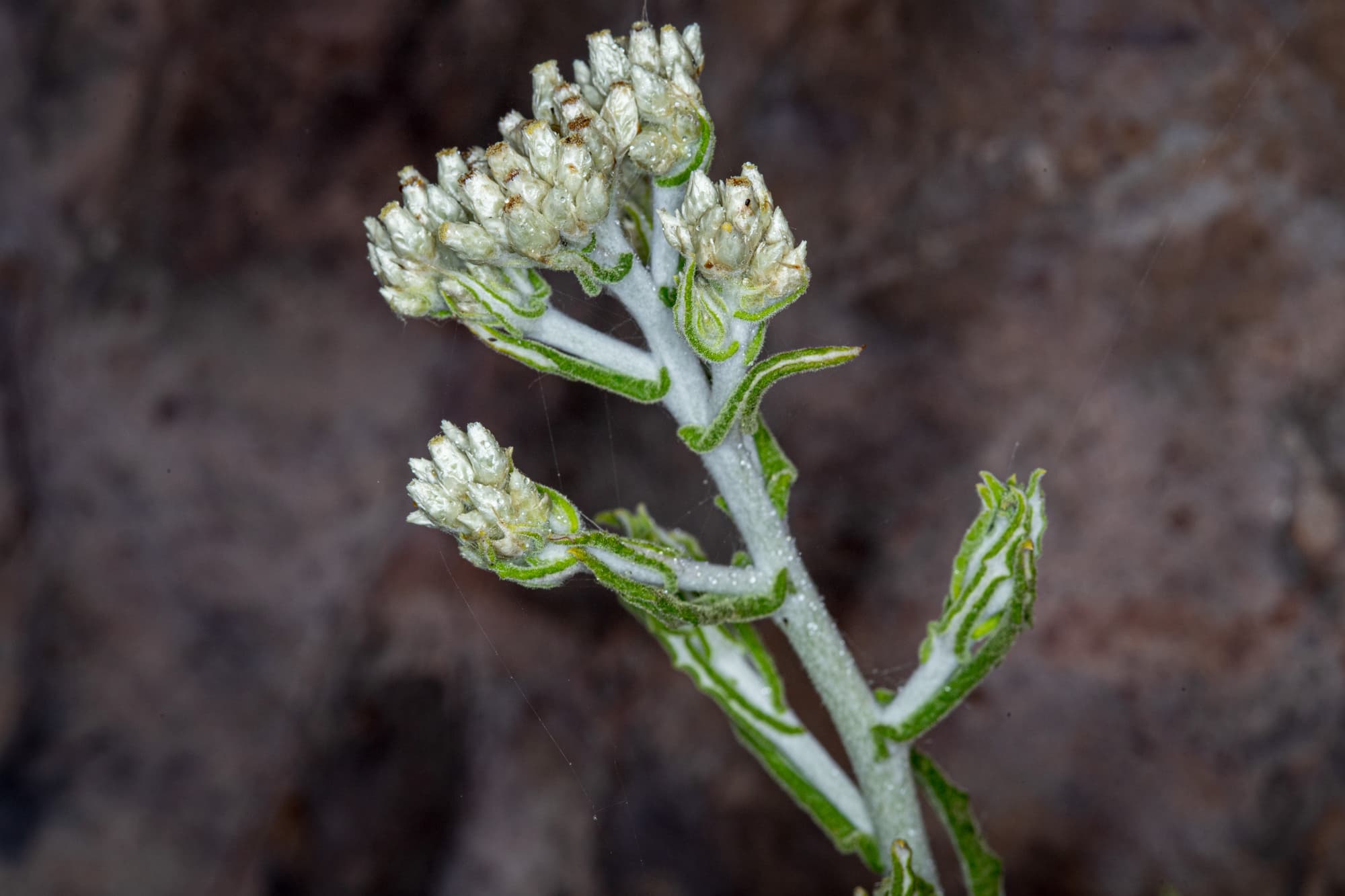 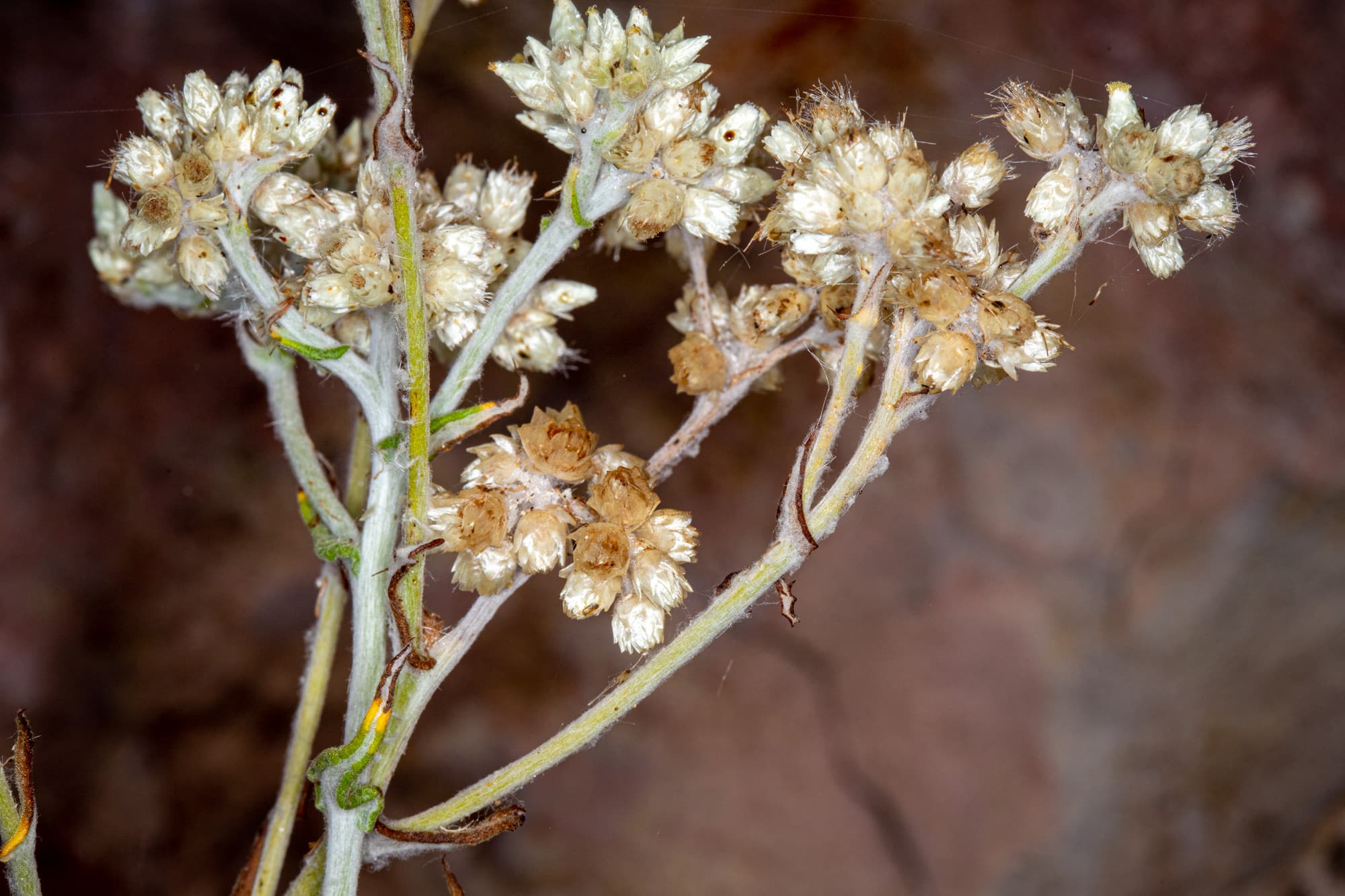 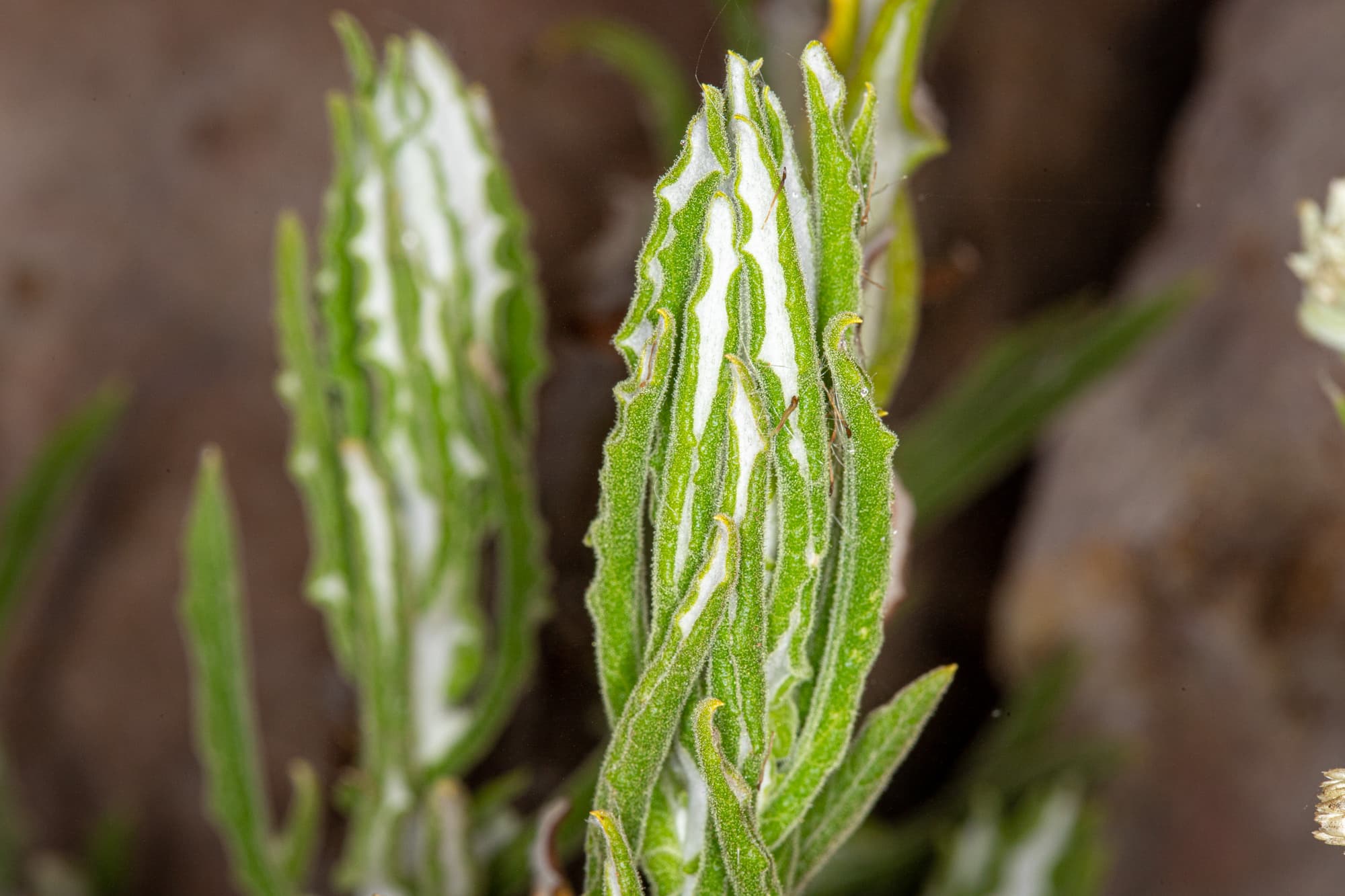 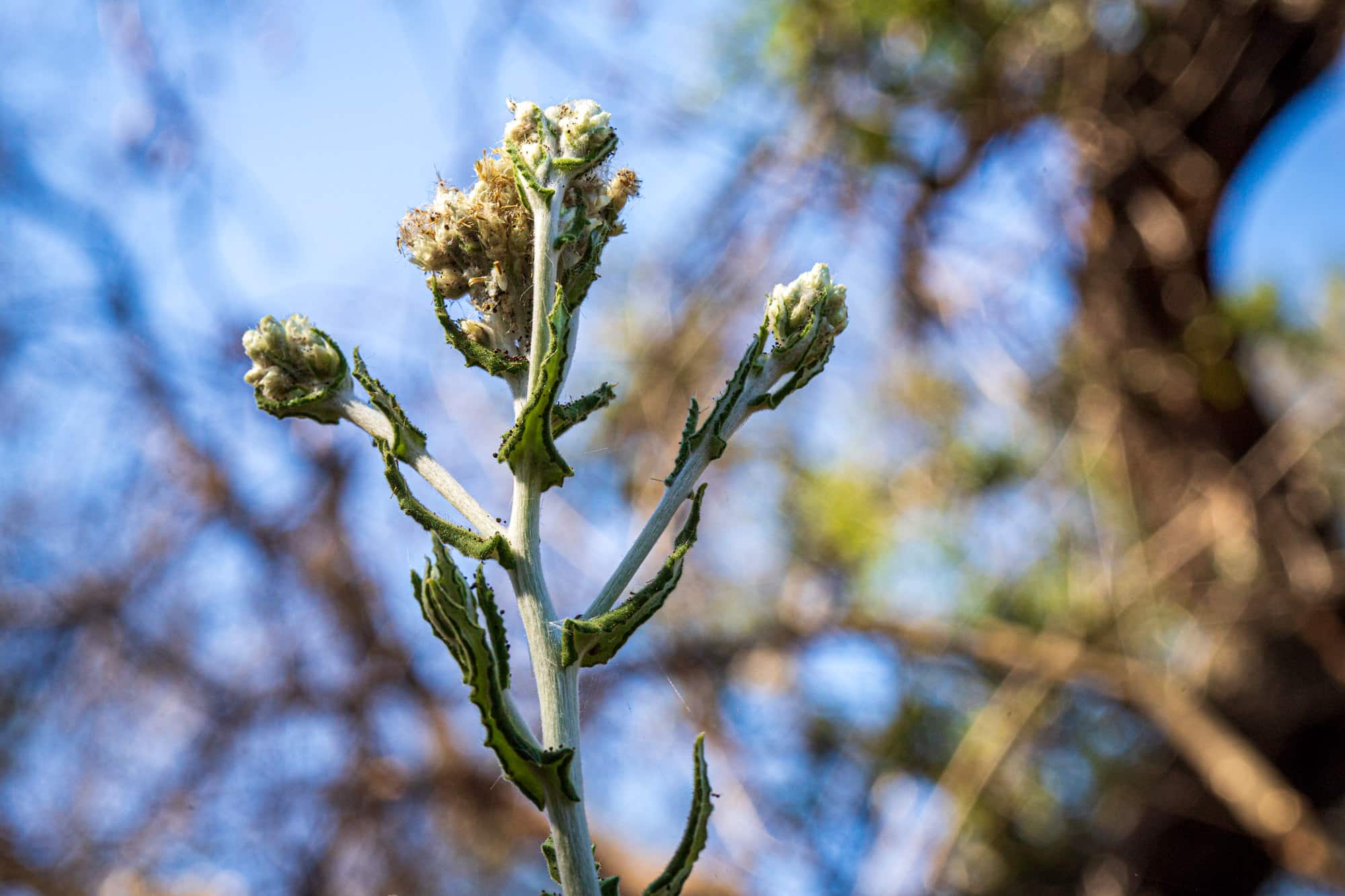 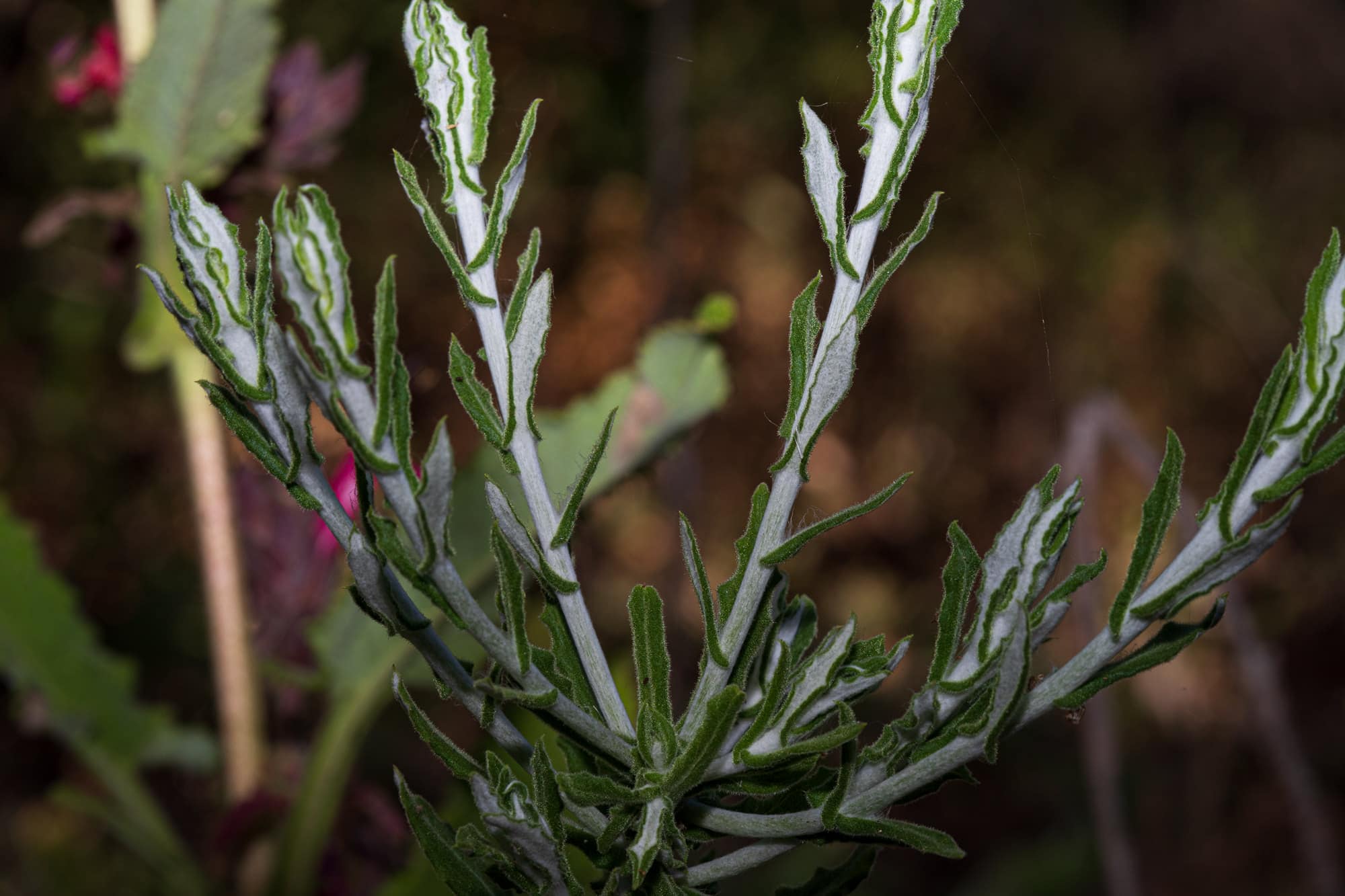 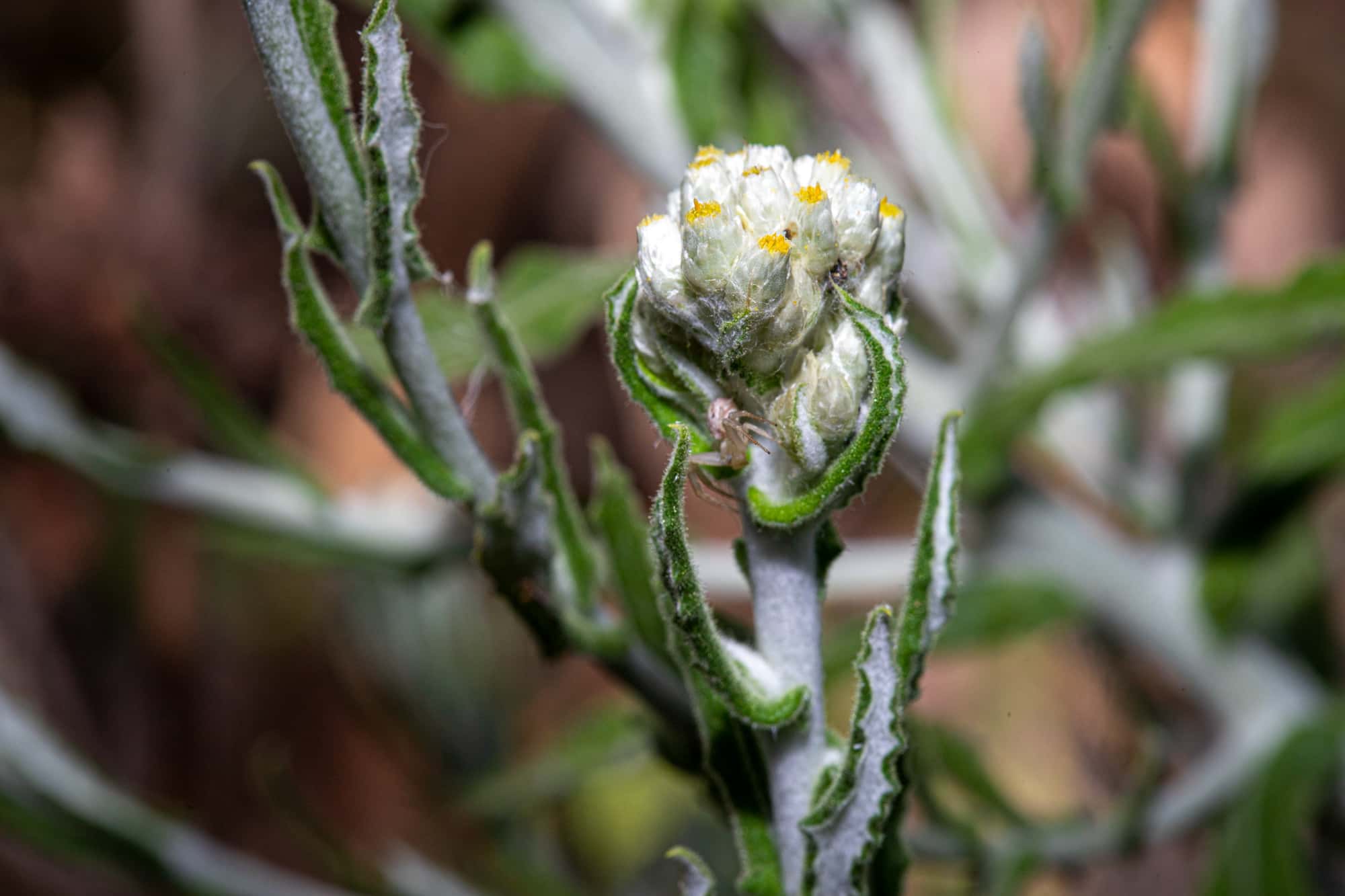 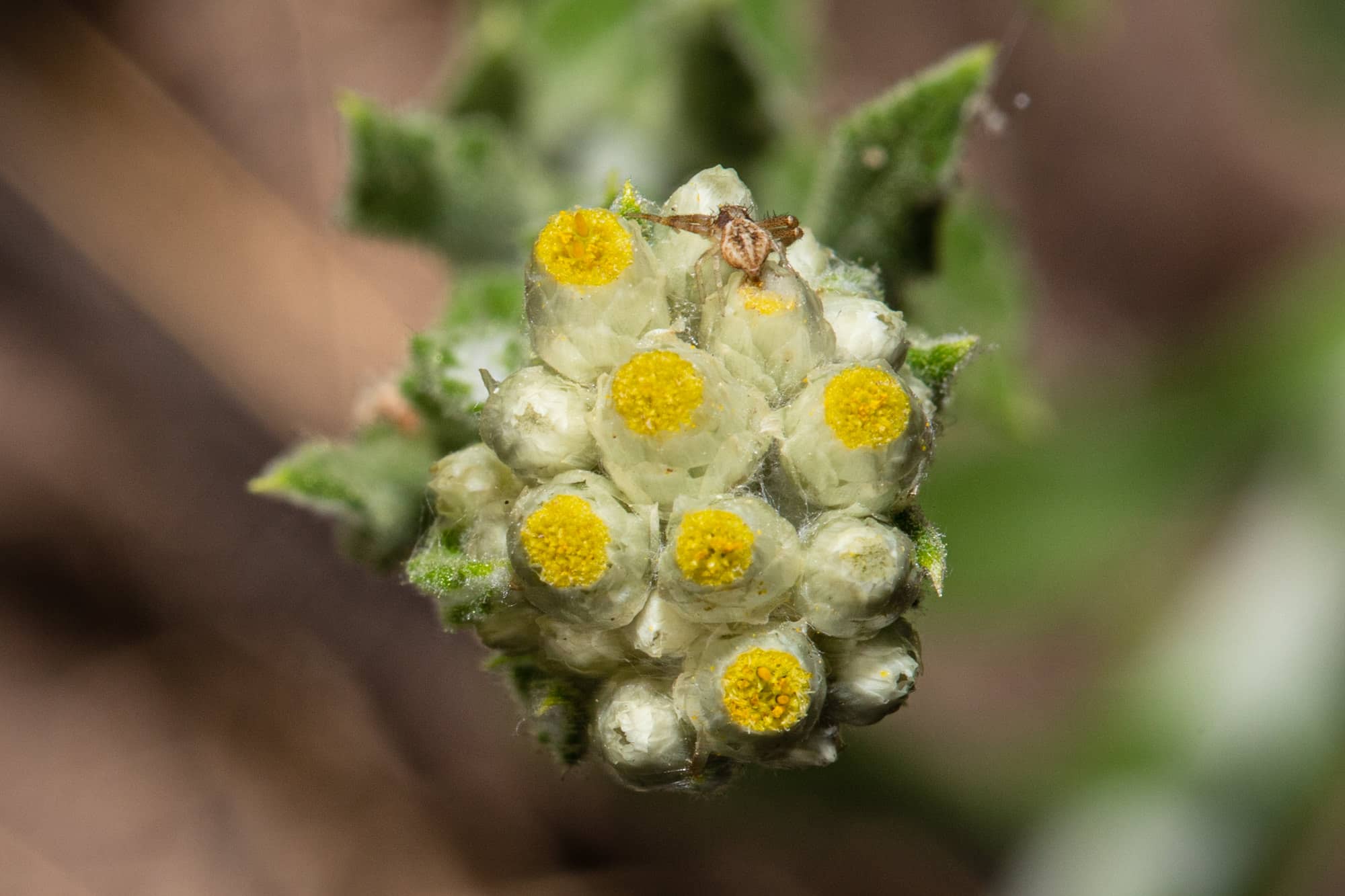 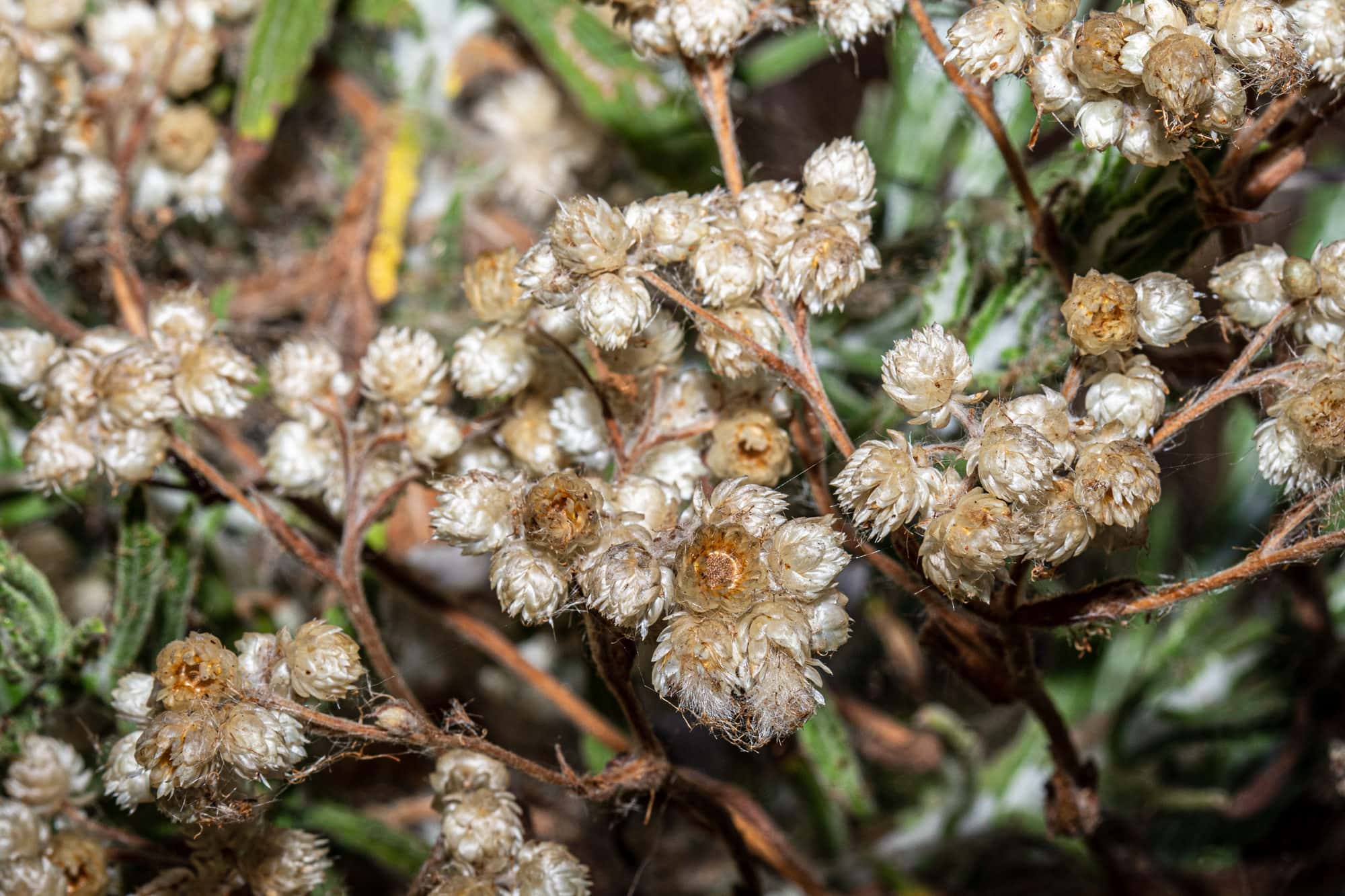 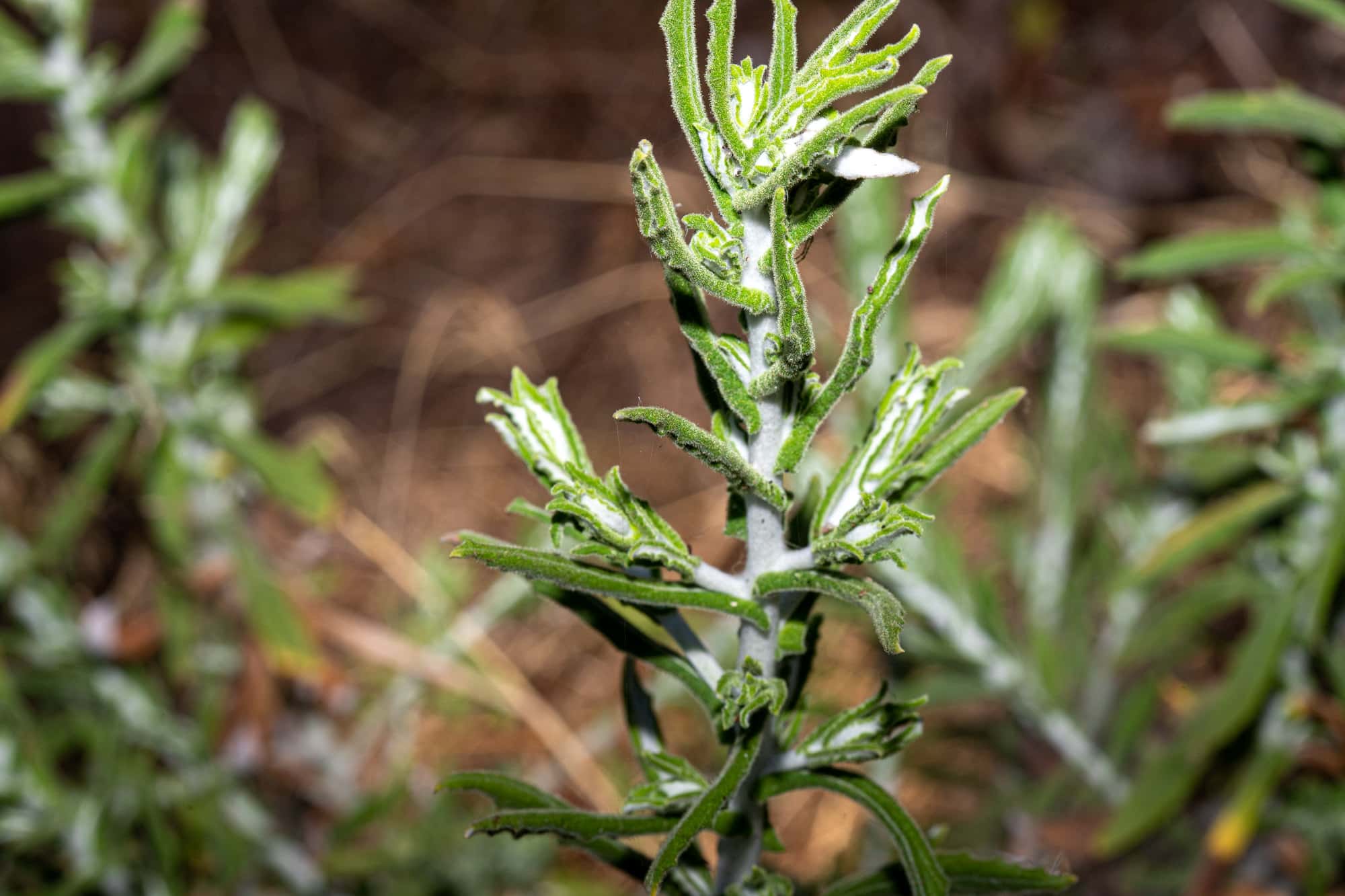 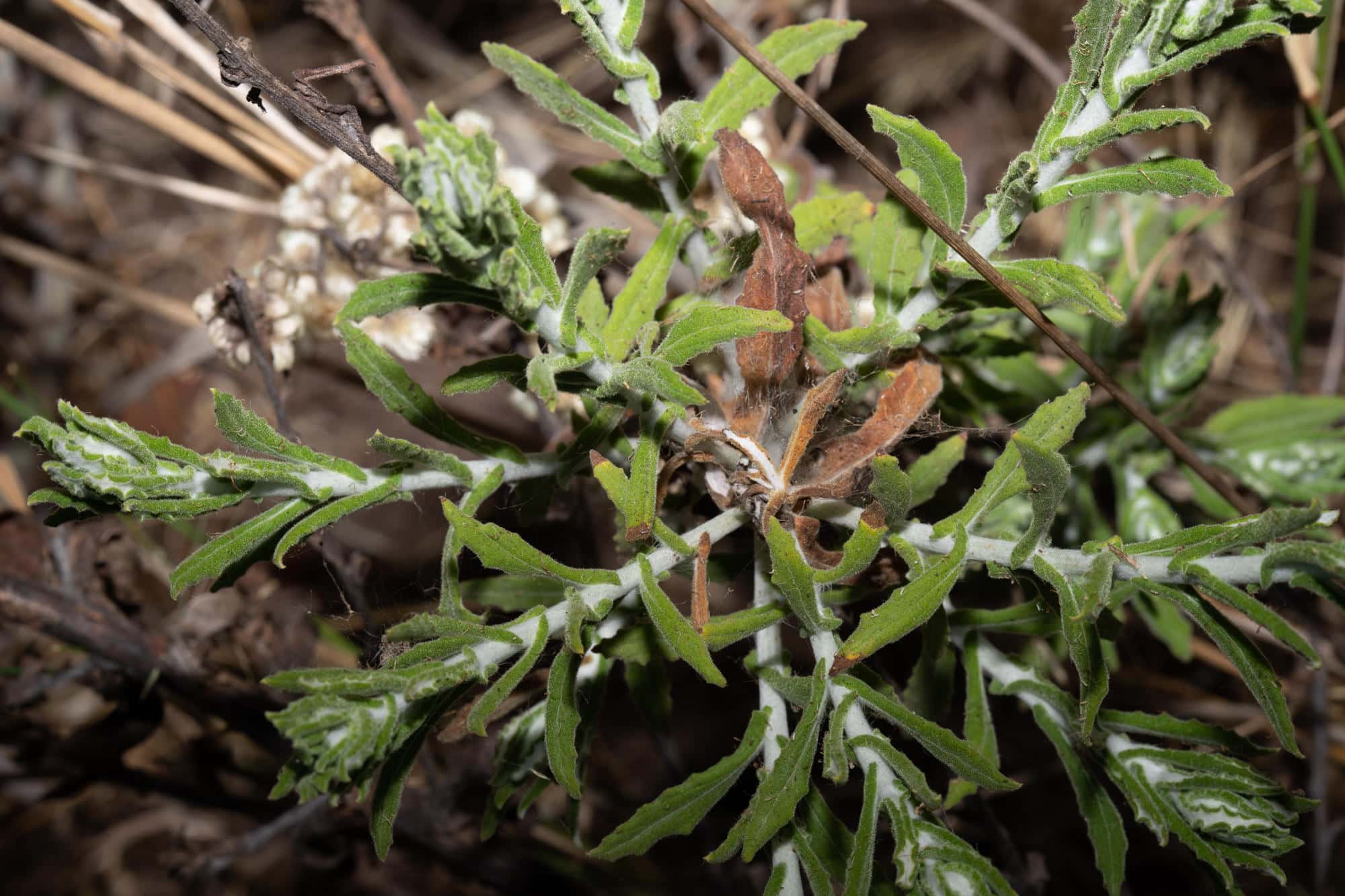 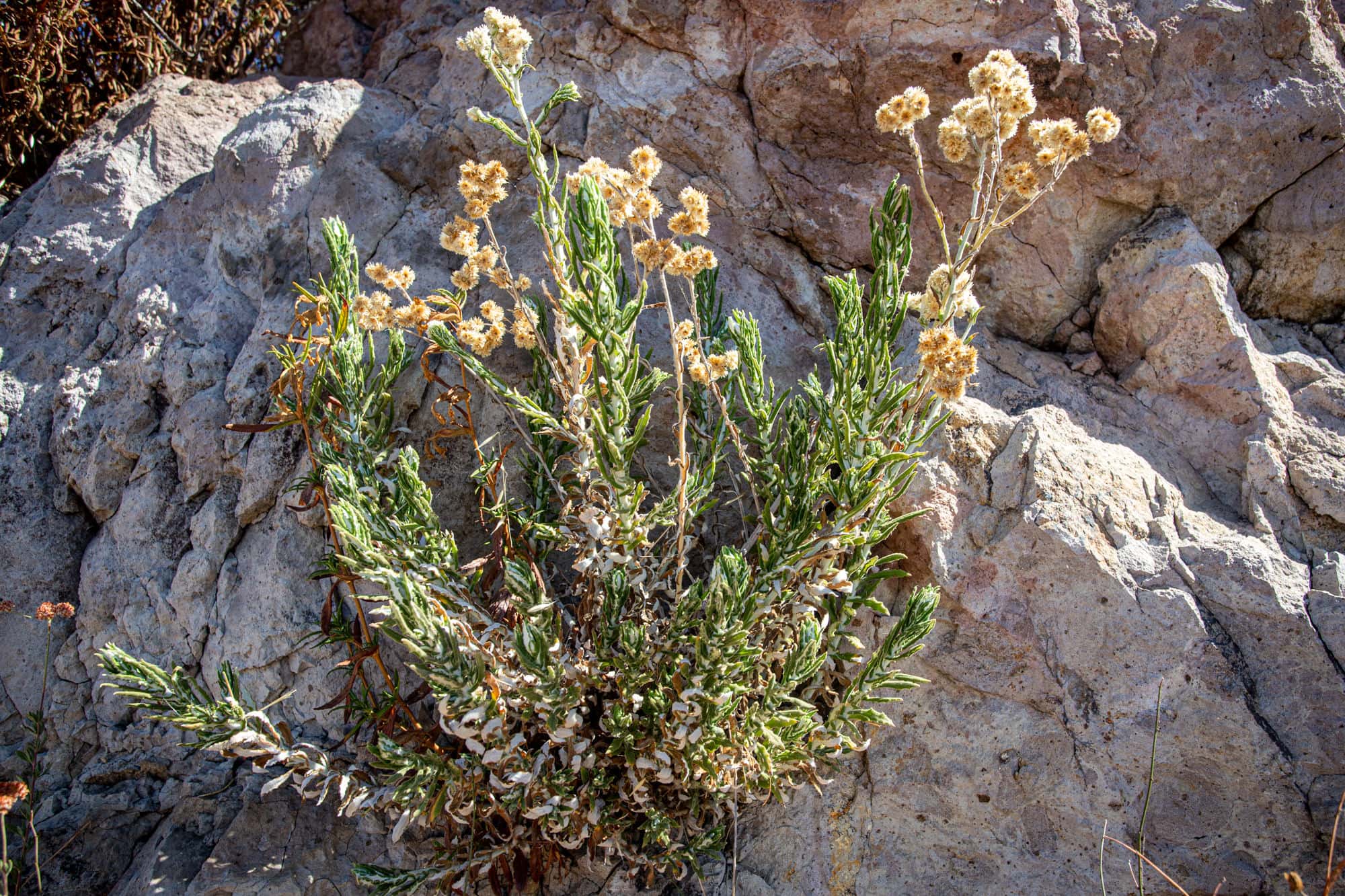 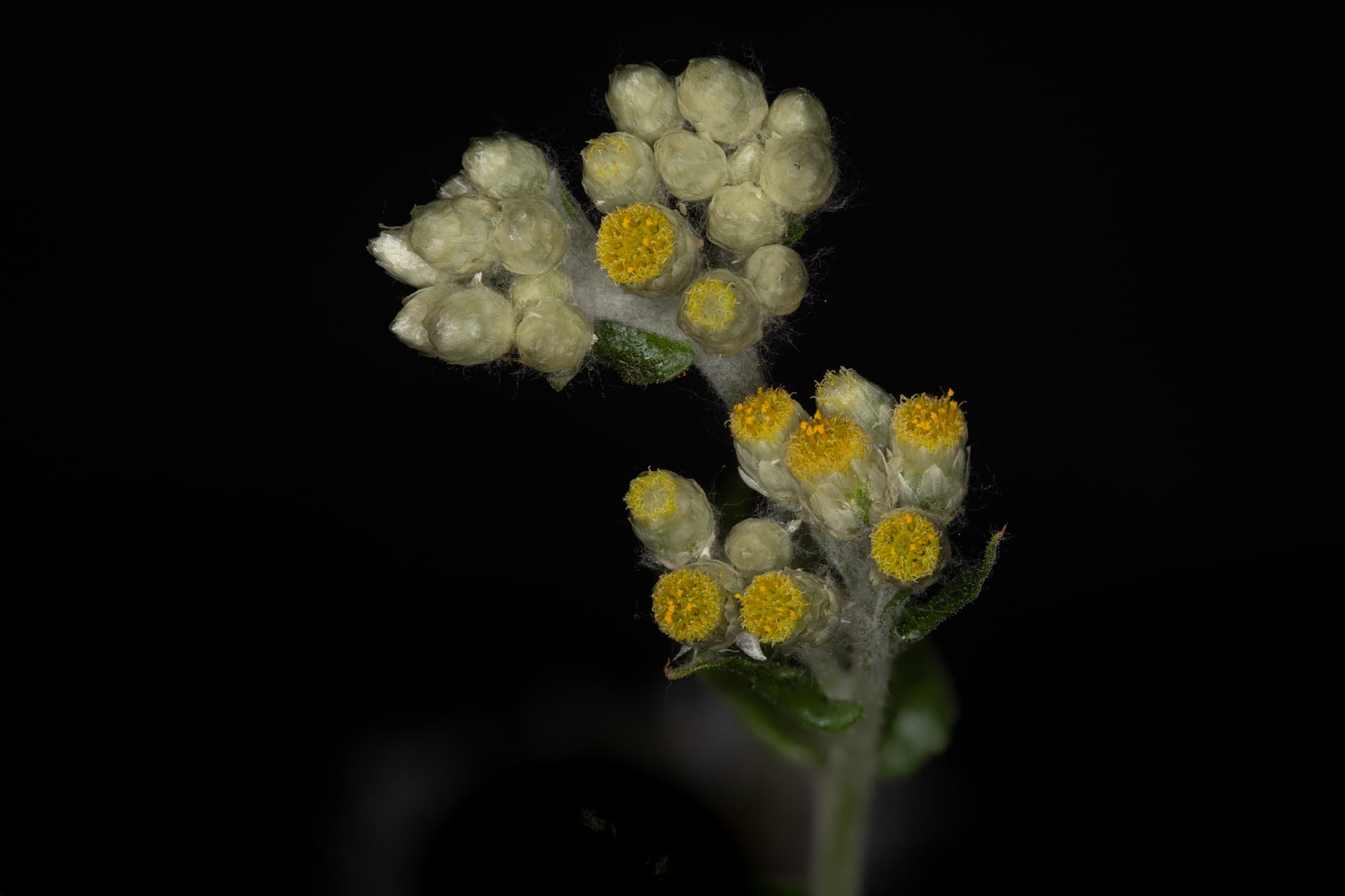 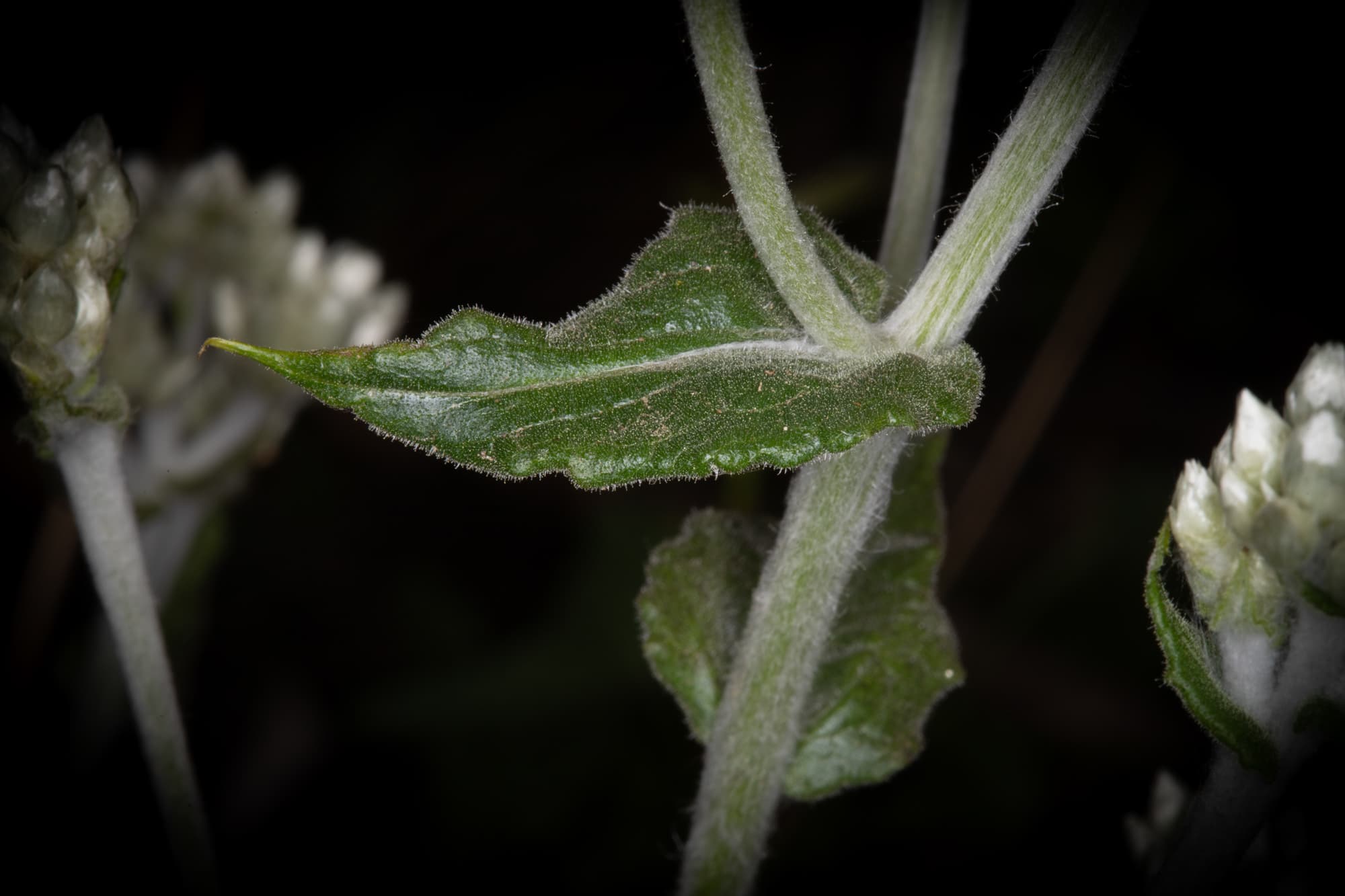 Two-Tone Everlasting or Pseudognaphalium biolettii is a perennial herb, native to California, less than four feet (1.2 m) high usually with several branches from its base. Covered with small glandular hairs, the stems and leaves are a bit sticky — your nose might even catch a whiff of the “lemony” aroma often associated with this plant. Summer drought causes the plant to go dormant until winter rains spark the growth process again. We have at least three ‘everlasting’ species in our mountains. All have similar flowers and can be distinguished by their foliage. Everlasting refers to the dry, papery phyllaries surrounding the base of each flower head. Long after the flowers have been dropped, the phyllaries remain, bearing a striking resemblance to the original flower if they were now dried flowers. Everlasting plants are members in the Sunflower/Aster family. Not quite rare and not quite common in coastal sage scrub and chaparral, especially in rocky, sandy or disturbed areas.

Stems are green and white — an effect of having long white hairs covering them and providing protection and conservation of water. Leaves can be oblong to oblanceolate or lanceolate, usually less than 2¾ inches (7 cm) long and ½ inch (0.6 cm) wide. Leaf edges are relatively smooth, with the margins partially rolled under. Leaves clasp the stem directly, two small collars at either side of the attachment point are easy to note. The leaf is a green on the topside while the bottom, covered with white woolly hairs, is nearly white. The contrast in leaf color gives the plant many of its common names (e.g. bicolor everlasting, two-tone everlasting).

Flower heads are born in clusters and each cluster is bundle of flower heads, each flower head is composed of numerous disk florets (packed very efficiently) and then surrounded by an urn-shaped capitulum. Several satin-white, papery, scale-like structures (phyllaries) cover the disk florets. These persist on the flower head long after the florets have been lost and very much resemble dried petals.

As a member of the Sunflower/Aster family, what appears to be one flower is actually a flower head, itself a cluster of minute flowers (called florets). Most florets are female. A few of the middle florets are bisexual. These are similar to the female florets but are larger. There are five stamens with yellow anthers and forked style (you would really need a hand lens to make those details out). Seeds are wind-dispersed with help from the pappus. Blooming from January to May — depending on the timing of the rains.

Pseudognaphalium — Literally false Gnaphalium, this is the new genus name for several species of Gnaphalium, and refers to a superficial resemblance to genus Gnaphalium. The genus Pseudognaphalium was published by Moisey Elevich Kirpicznikov in 1950. (
biolettii — after Frederic Theodore Bioletti (1865-1939). "Frederic Theodore Bioletti was of Italian, Welsh, and English ancestry. He was born in Liverpool, England, on July 21, 1865, and lived in Scotland and England until he came to America in 1878