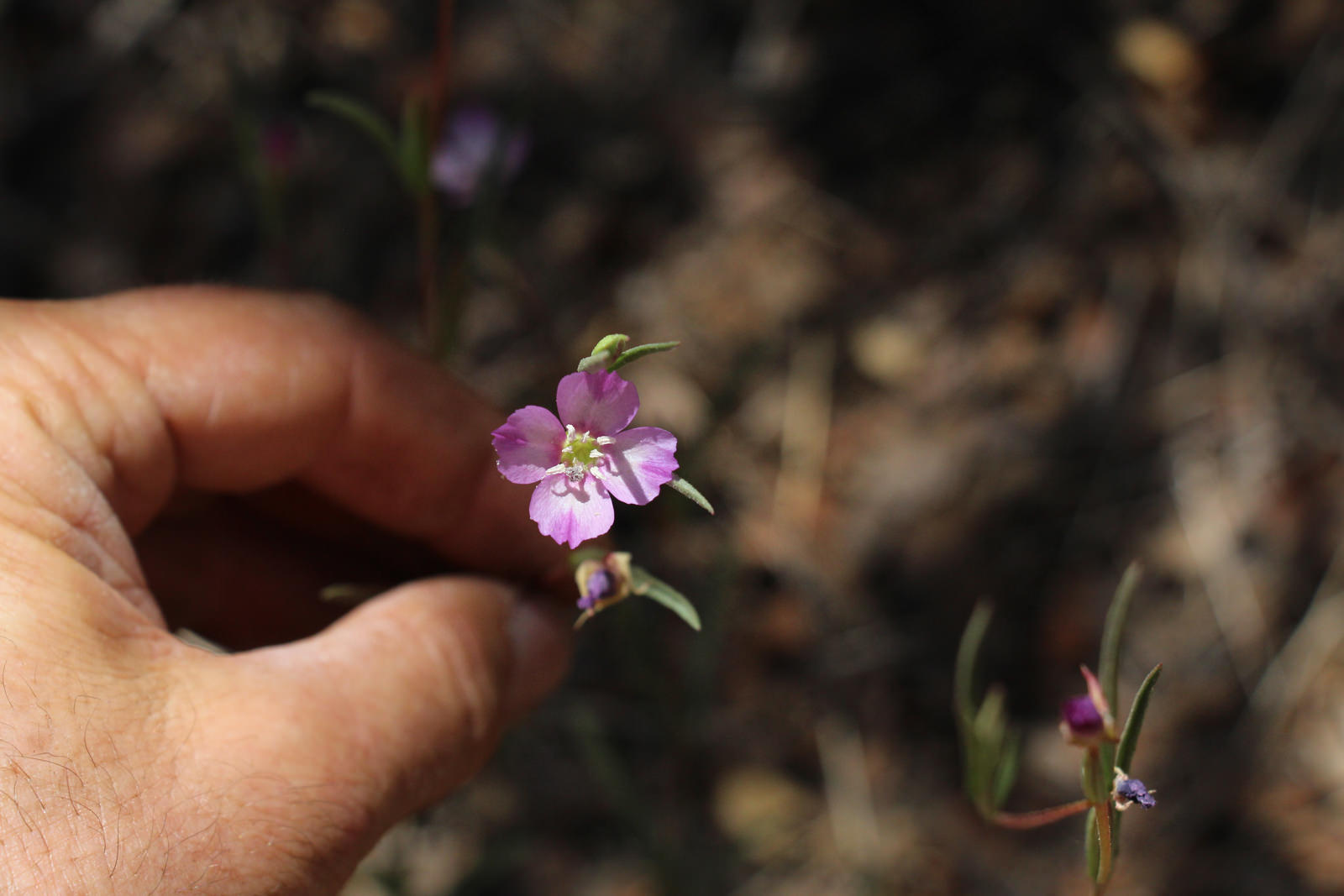 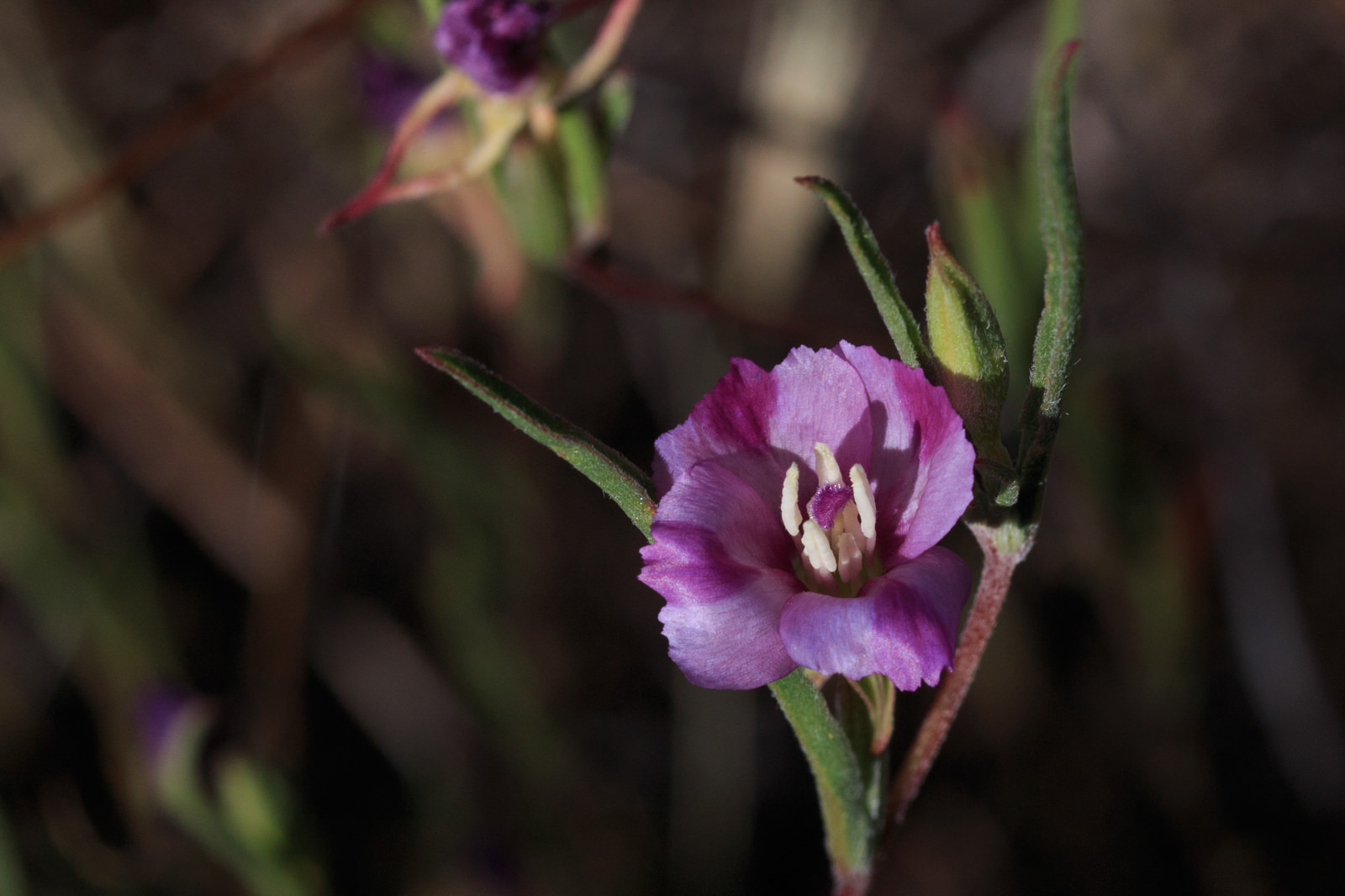 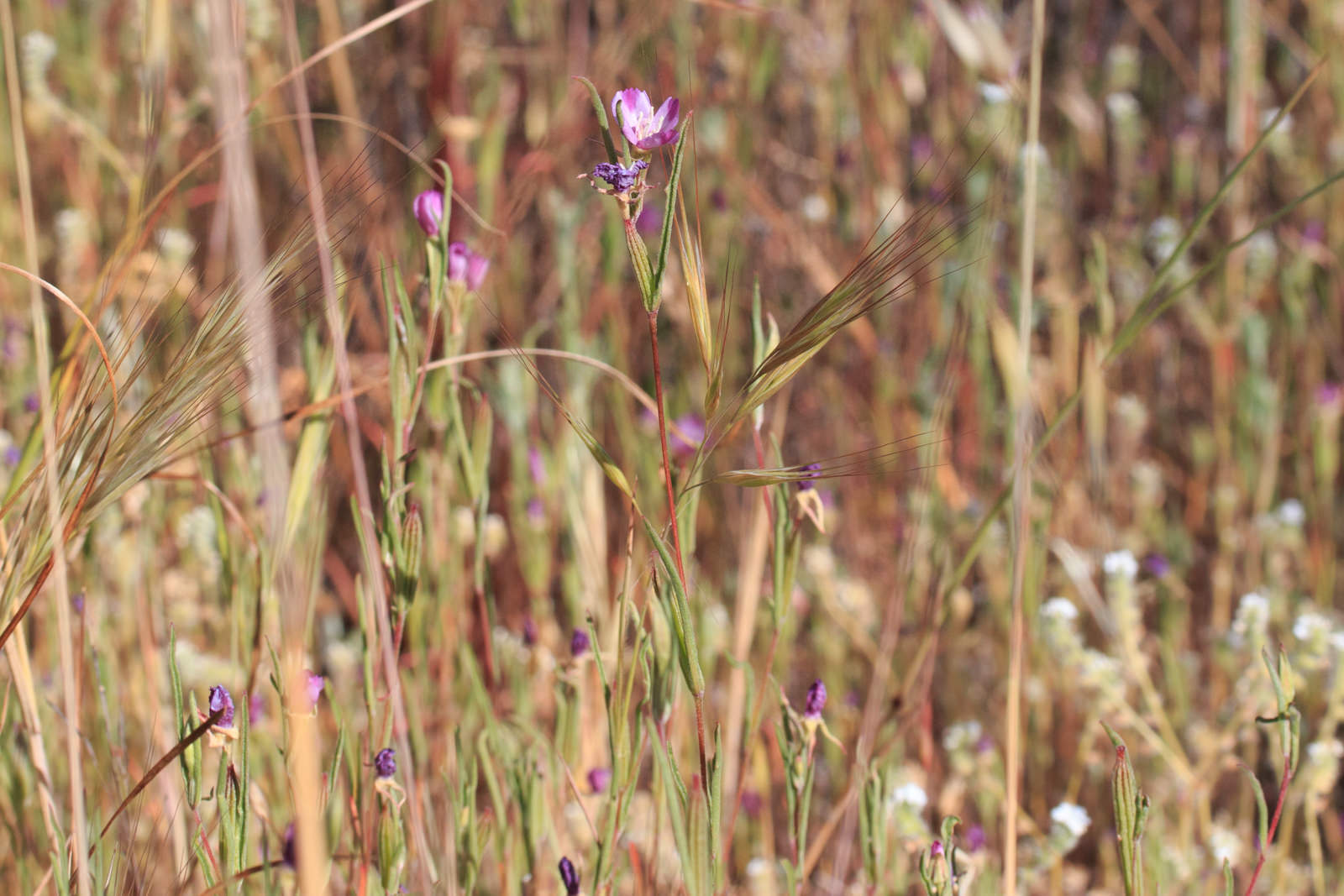 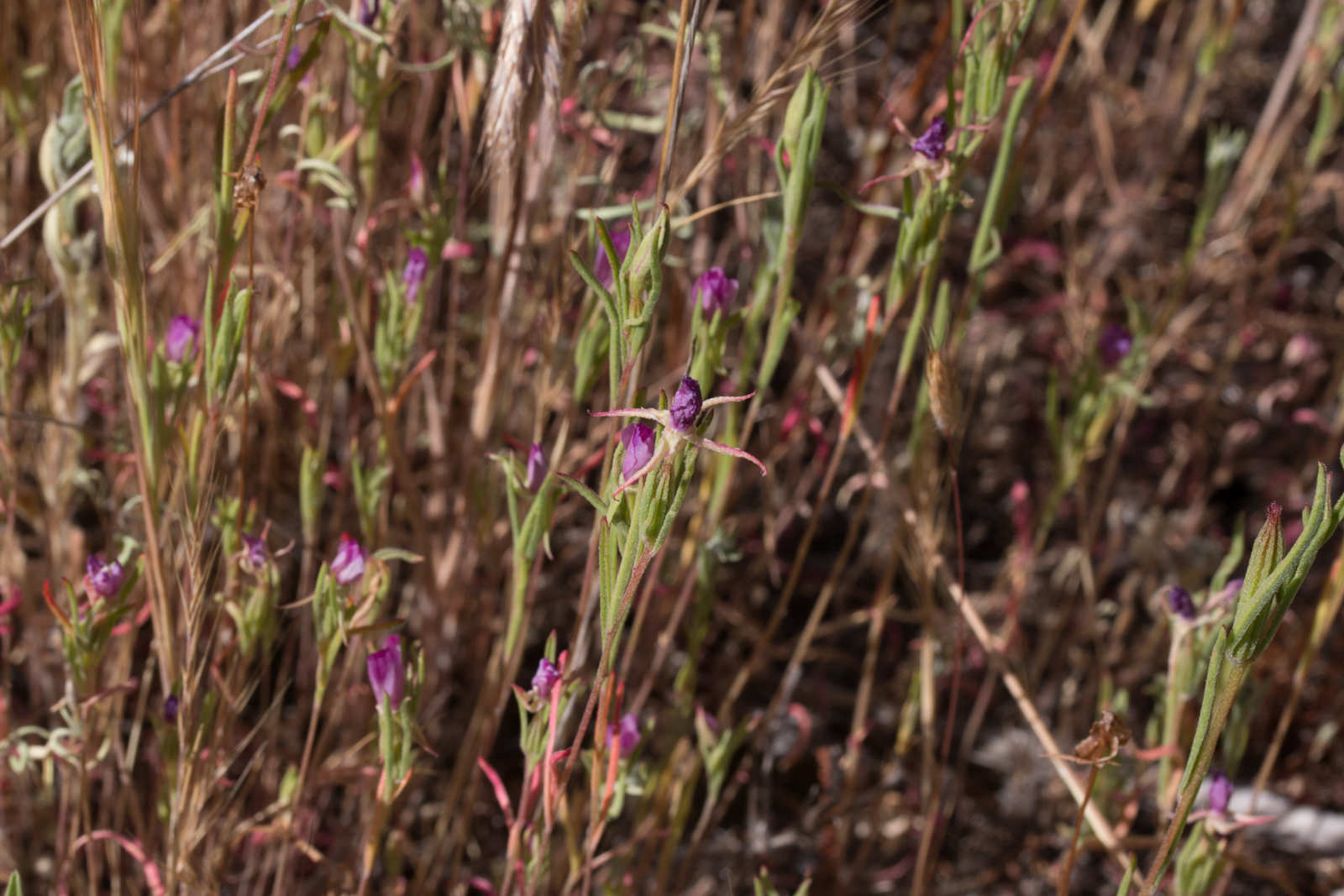 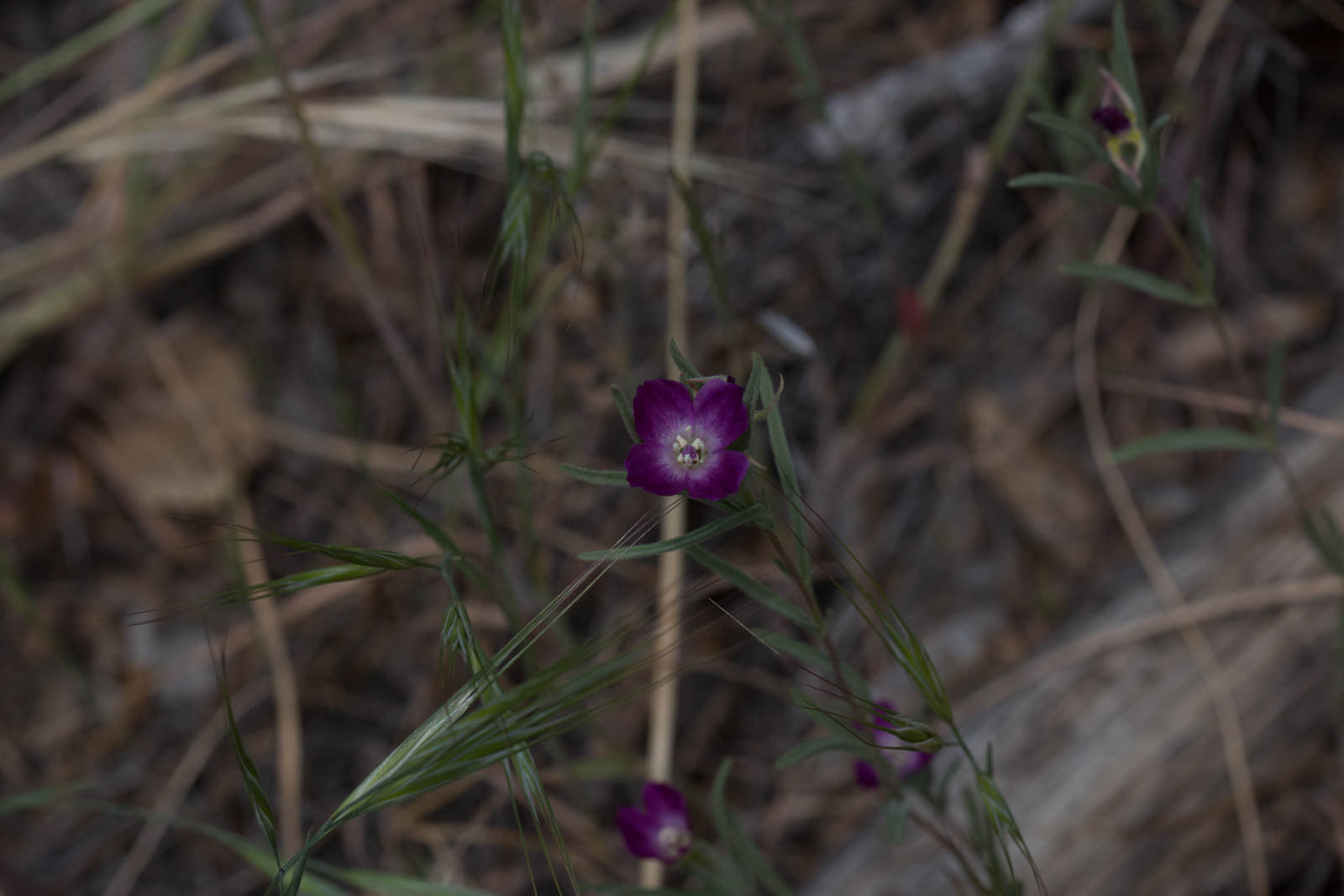 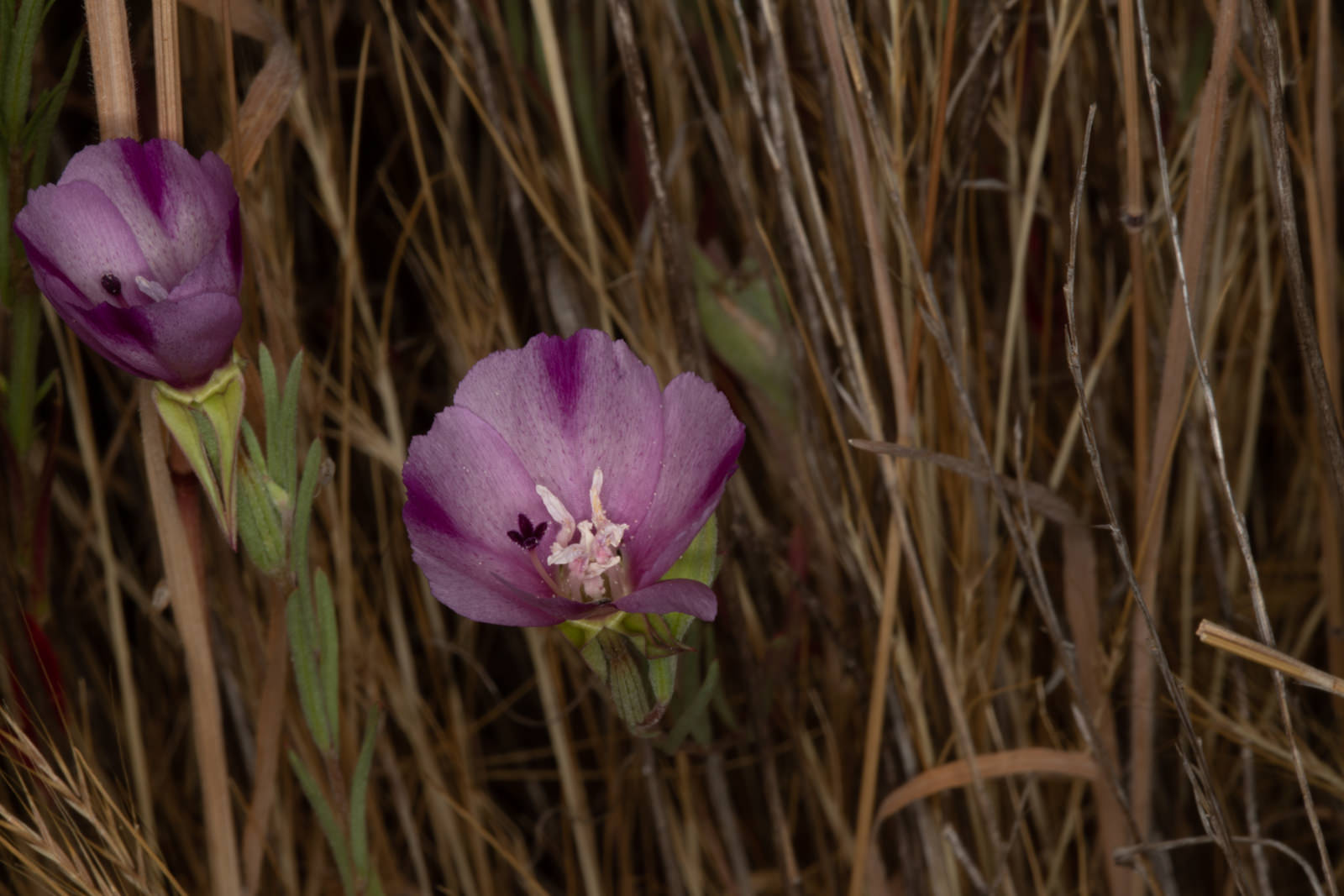 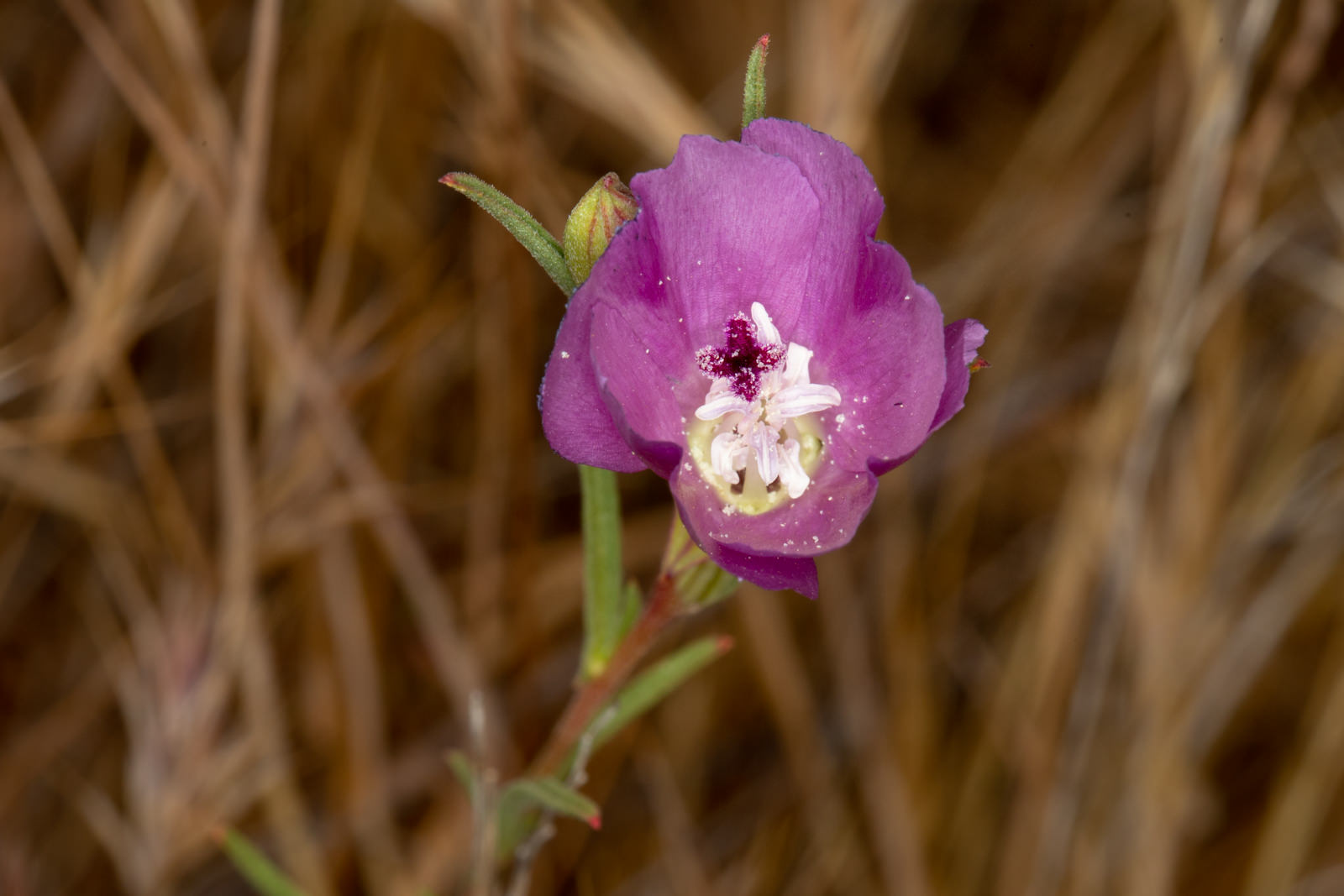 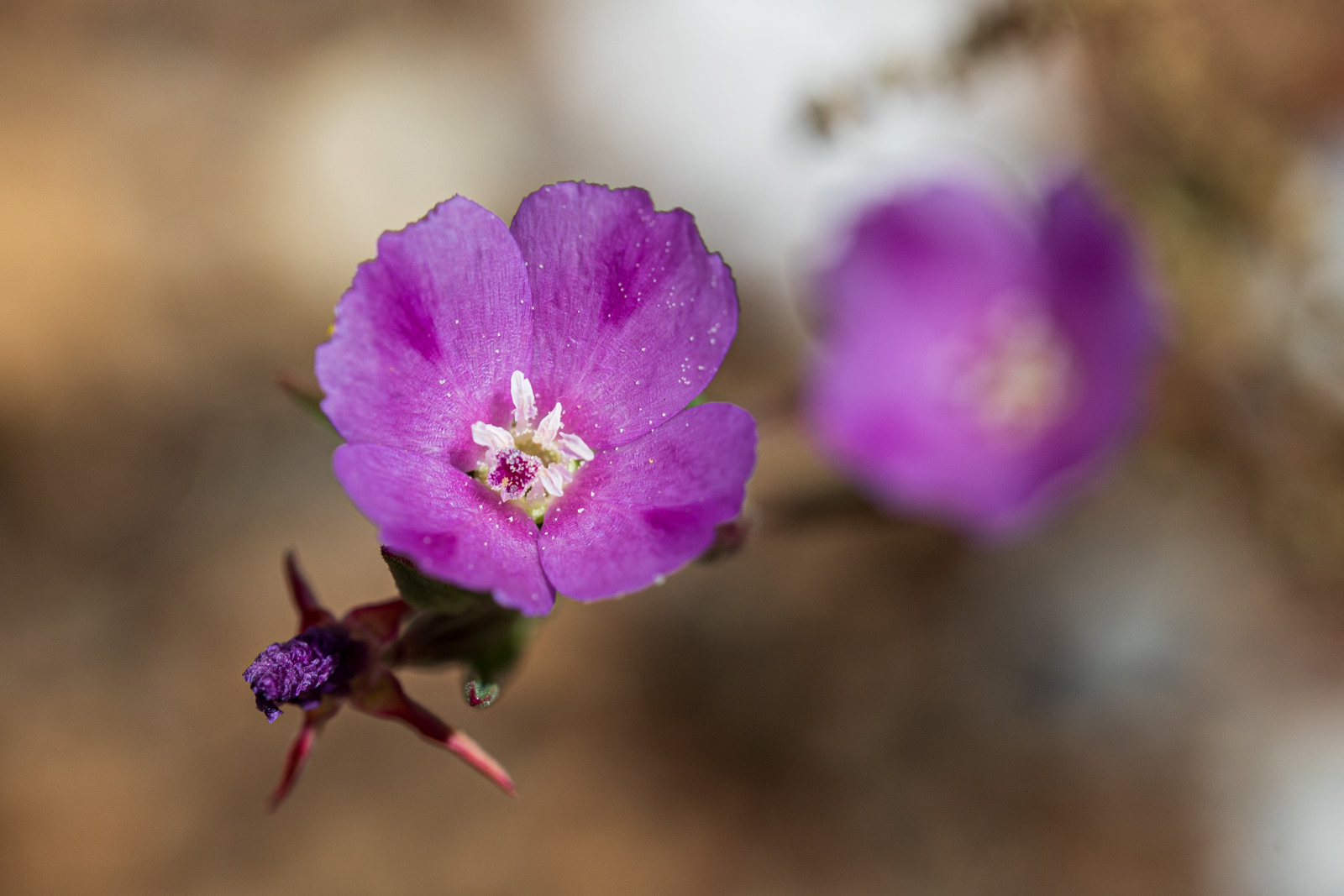 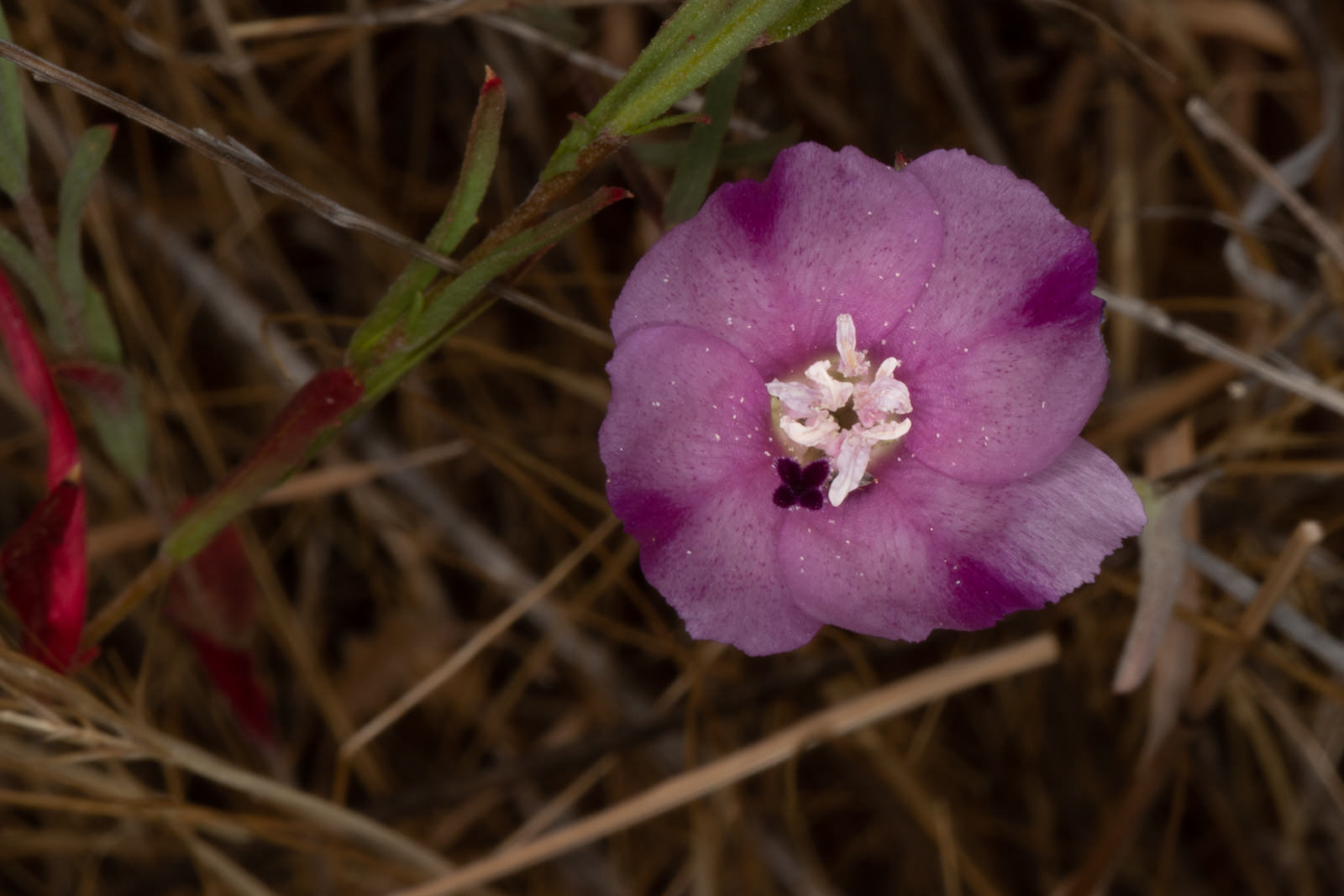 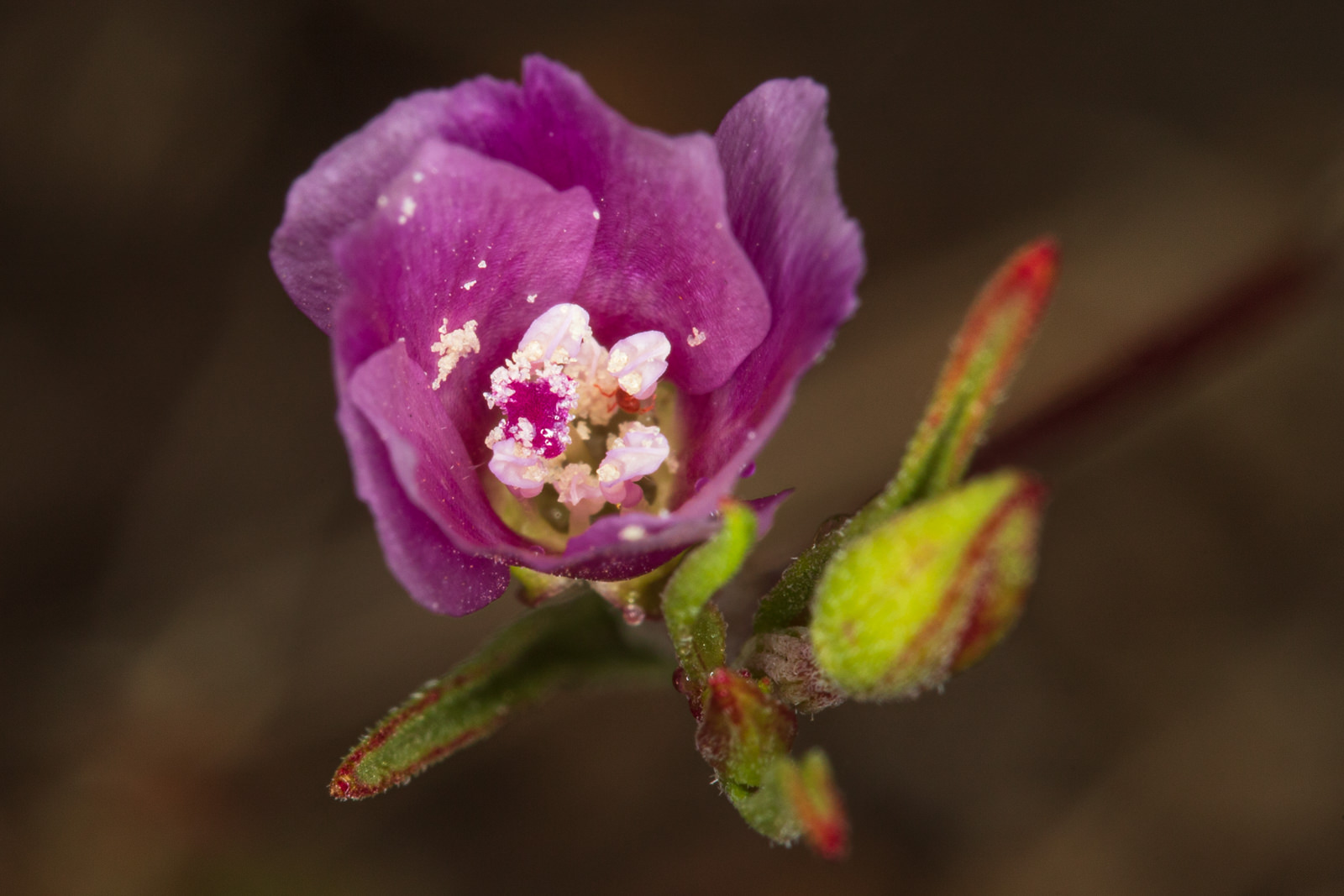 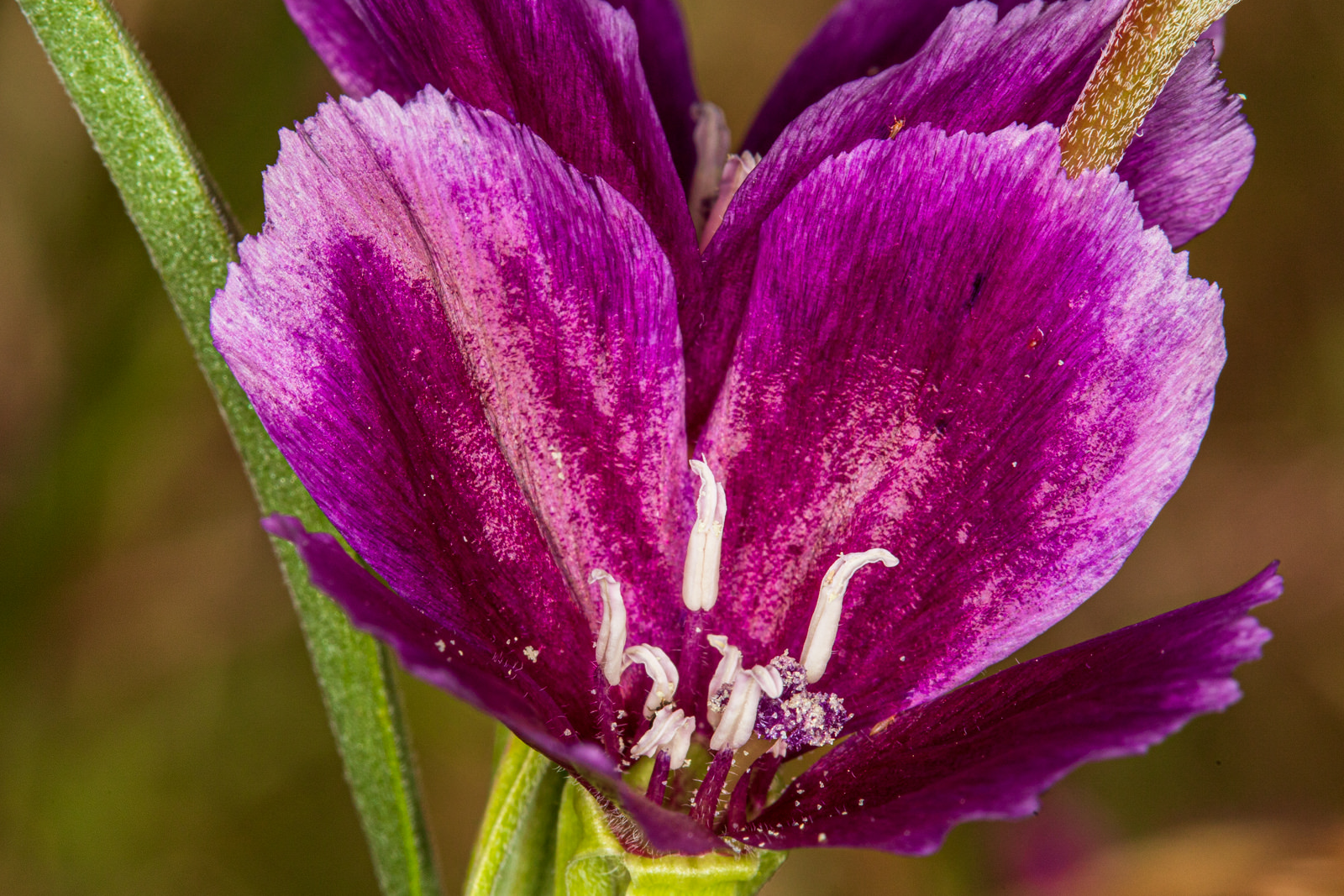 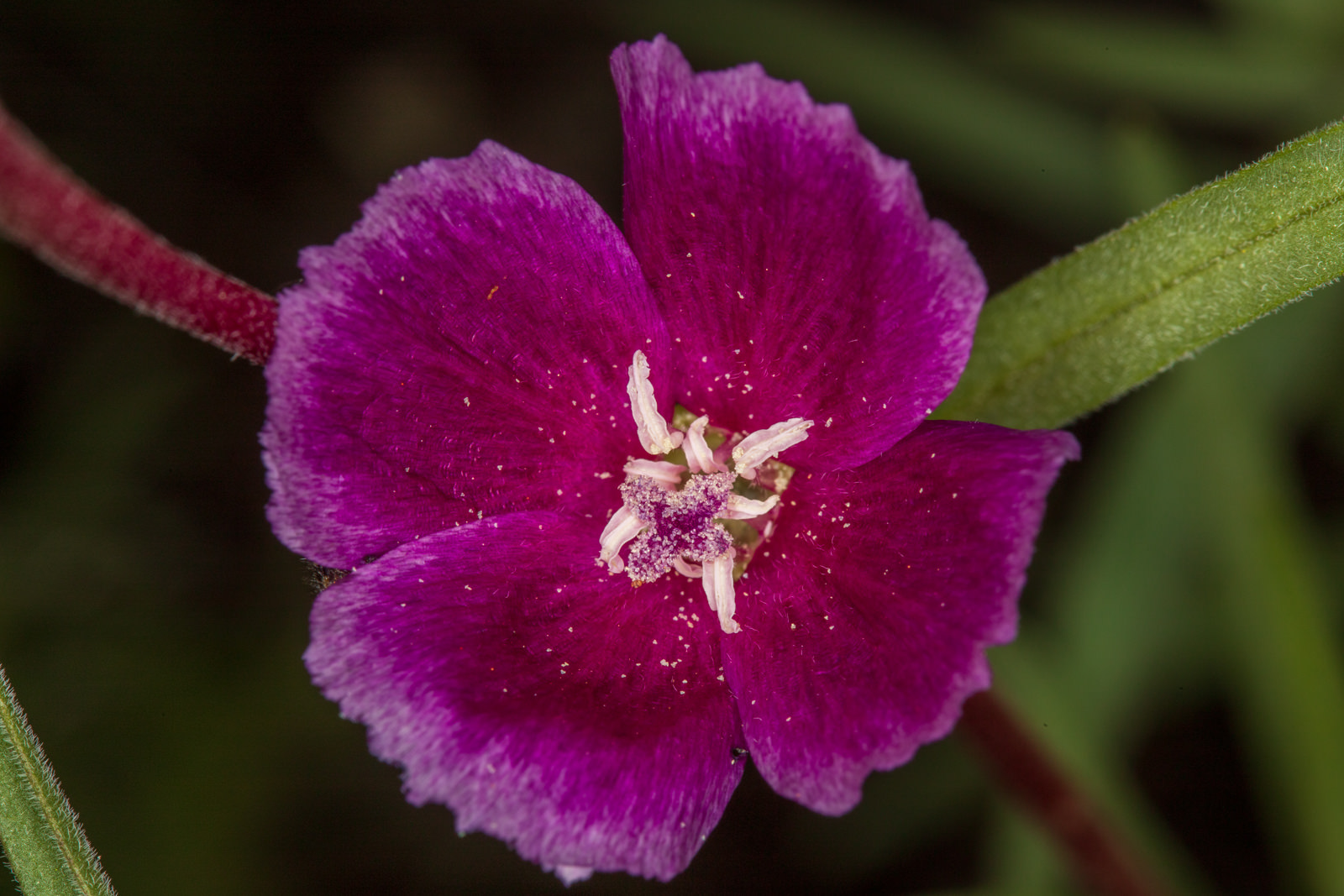 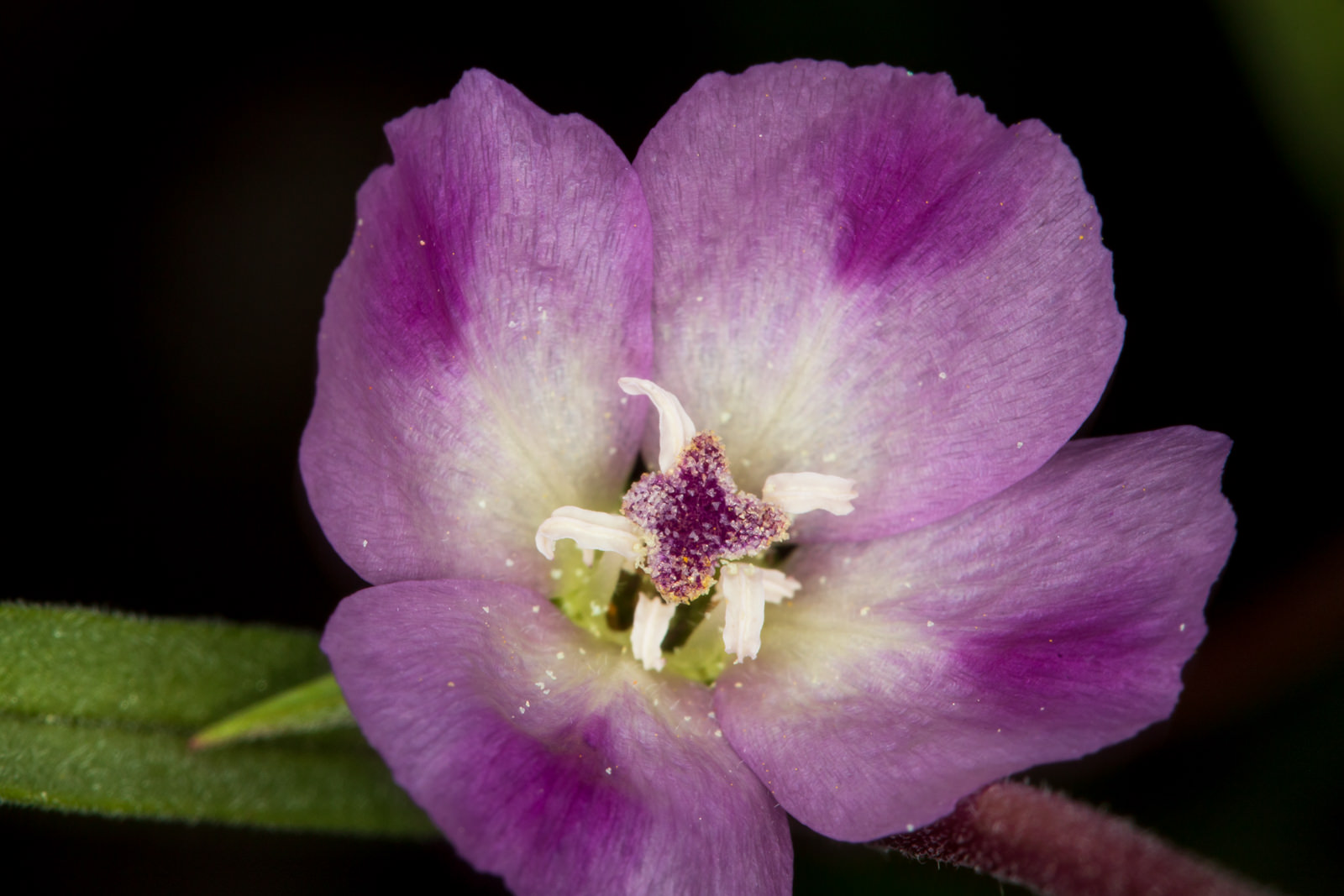 Wine Clarkia - Clarkia purpurea ssp quadrivulnera- is an Annual in the Onagraceae or Evening Primrose/Willow Herb family. Four petals, four sepals and reflexed bracts are traits to look for when identifying flowers in this family.   Wine Cup Clarkia is native to California and occurs as far north as British Columbia and as far south as Baja California. The bowl-shaped flowers have four petals, usually about an inch long. Colors vary; occuring in shades of pink, purple, or deep wine red; nearly always with a streak or splotch of pink or red on the petal. The plant grows from a thin reddish stem that can be 3 feet in height and makes use of a few lance-shaped leaves for photosynthesis.

Native peoples farmed this plant (sowed the seeds and harvested them) using the seeds for food (after grinding them). During the 19th century, Botanists collected seeds from this plant and sent them back to Europe. These “foreign” flowers became essential parts of many botanical gardens. An interesting contrast in gardening for the table. Nourishment for the soul compared with nourishment for the body.

If you want to photograph the flower of this plant, the flowers are open in the daytime (mid-morning 9AM) and closed at night. Wine Cup Clarkia is mostly insect pollinated, attracting native bees and other insects. Prominently located stamens (responsible for producing pollen) facilitate pollen transfer. Stamens with their anthers covered in white grains of pollen are visible in several of the images included here. I captured these images with a 1-1 macro lens making it easier to see what the stamen and pollen looks like.

Link to Calfora.net - the best source of this fascinating information! Name Origin: Clarkia  Clarkia is named for William Clark (1770-1838) who with Captain Meriwether Lewis made the first transcontinental expedition from1804 to 1806.
purpurea:Purple - referring to the color of the flowers