The further a trail takes you from the nearest road, the more likely that trail is a candidate for sporadic maintenance. Hiking five miles and carrying tools reduces the number of willing volunteers! These trails need maintenance — so every few years we arrange for either a massive number of volunteers or a spike camp. With COVID-19 forcing us to make different choices, this past season we endeavored to work 8 Saturdays and a Wednesday to get the job done. Dave Edwards — whose idea this was — led the effort and kept us focused on the segment we were working while providing a bit of inspiration, suggesting that we could finish the job if we kept moving forward up the mountain.

The Blue Canyon Trail begins at the Danielson Ranch and follows a drainage to where it intersects and joins the Old Boney Trail. This section moves around after flooding. Removed in the process were downed trees and brush encroaching on the trail. Water now flows off the trail, using two additional drains. Silt was cleared from several existing drains. We positioned several large rocks to hold up a section of trail that was being eroded and built an inside drain to route water away.

Chamberlain Trail traverses up a ridge and ultimately brings one to Circle X Ranch. The first mile or so had been weed whipped by another group. Progress here was quick as we only had to deal with shrubs and burned branches leaning into the trail. The further up the trail we went the denser the brush became. The brush cutters allowed us to make progress at a faster clip and kept a crew of volunteers busy removing the cuttings from the trail. Several times during these events, one crew member was on his knees cutting the Greenbark Ceanothus with loppers and saws (the hedge trimmmers are not as effective cutting this plant). One hundred linear feet of this plant was cut back to allow for scratch free travel. Using a combination of hedge trimmers, loppers and saws, a considerable amount of brush was removed. When we first encountered this segment - it was hard to see where the trail went. The trail bed was there but plants had nearly hidden the tread.

The 2018 Woolsey Fire burned and top killed (leaves and limbs) nearly all plants in its path down to the junction with Blue Canyon. Underground, most shrubs and trees survived and began sprouting soon thereafter. The following months brought rain. With no plants to hold back the flow of water, thousands of rivulets formed on many slopes. The flowing water displaces dirt and rocks, creating a mixture that scours the terrain as it finds its way downhill. As the water crossed the trail, sections of the trail lost soil but gained thousands of small rocks with more than a few larger rocks mixed in. Overflowing drains sent water down the middle of the tread, further damaging the trail. All that rain did provide for an amazing bloom of flowers for the past two years and encouraged the regrowth of chaparral. 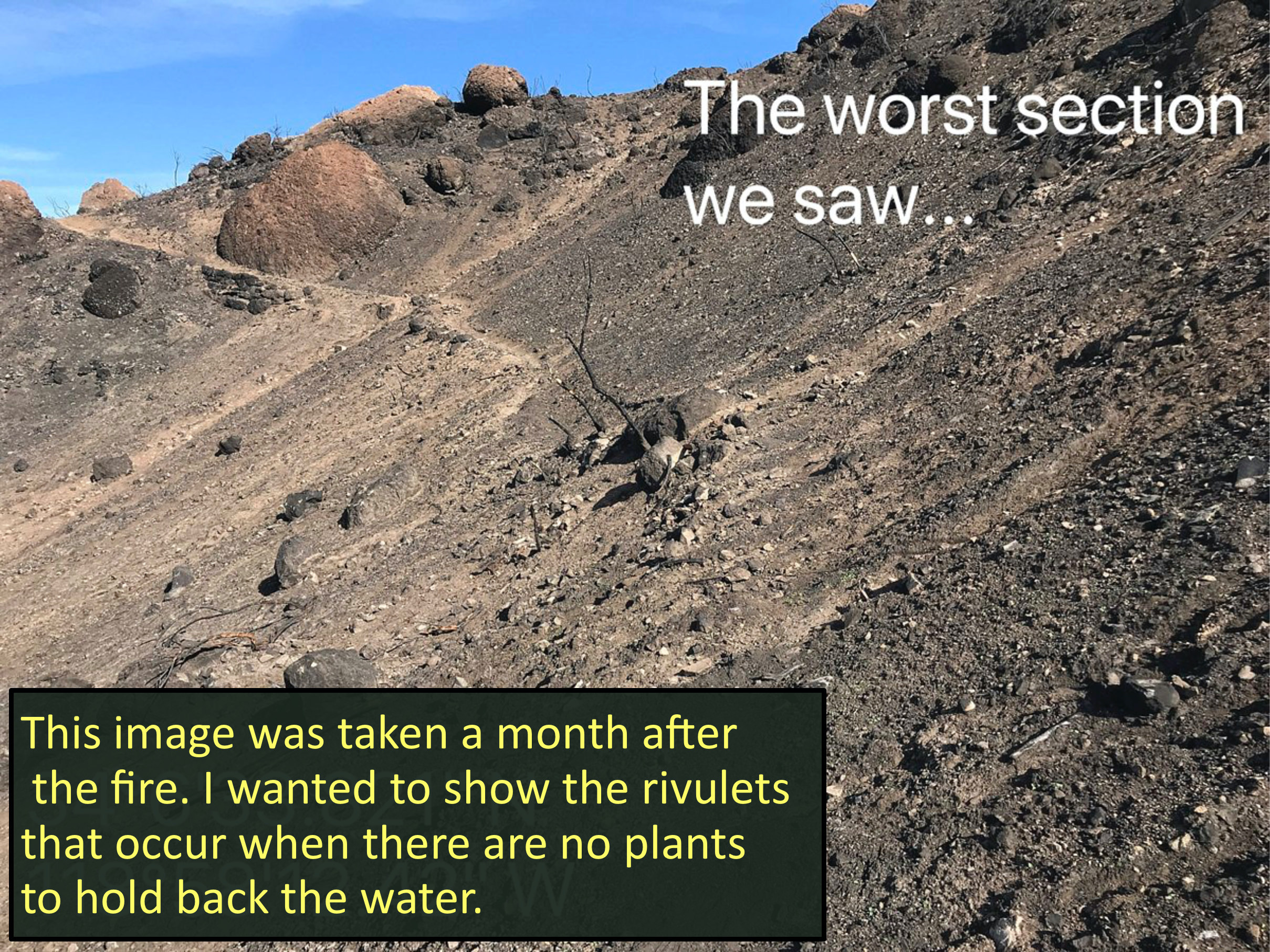 Several more Saturdays required hikes up to 5 miles & 2,300 feet elevation gain(one way) along - with a couple of hundred volunteer hours removing brush and repairing tread resulted for the moment in a trail that is much nicer to hike and enjoy.

This trail was hand built by Ron Webster and his crew in 1990. Close observation will reveal that parts of an old road bed are part of the trail’s foundation. Without regular trail maintenance, Nature will eventually reclaim this path.

The State of California designated this area as part of the Boney Mountain State Wilderness in 1974. Read More. We were surprised and disappointed to see groups of bicyclists riding these trails and ignoring the signage indicating that bicycles were not allowed. To a man, each claimed they did not know where this trail went and that they had not seen any signs indicating the "No Bikes" policy. Amazing, how these middle age men on e-bikes were so lost they did not know where the trail went and had no idea of where they were! We provided direction again, when they got lost the following weekend on the same trail - a good thing we were out there working or who knows how lost they might have gotten! 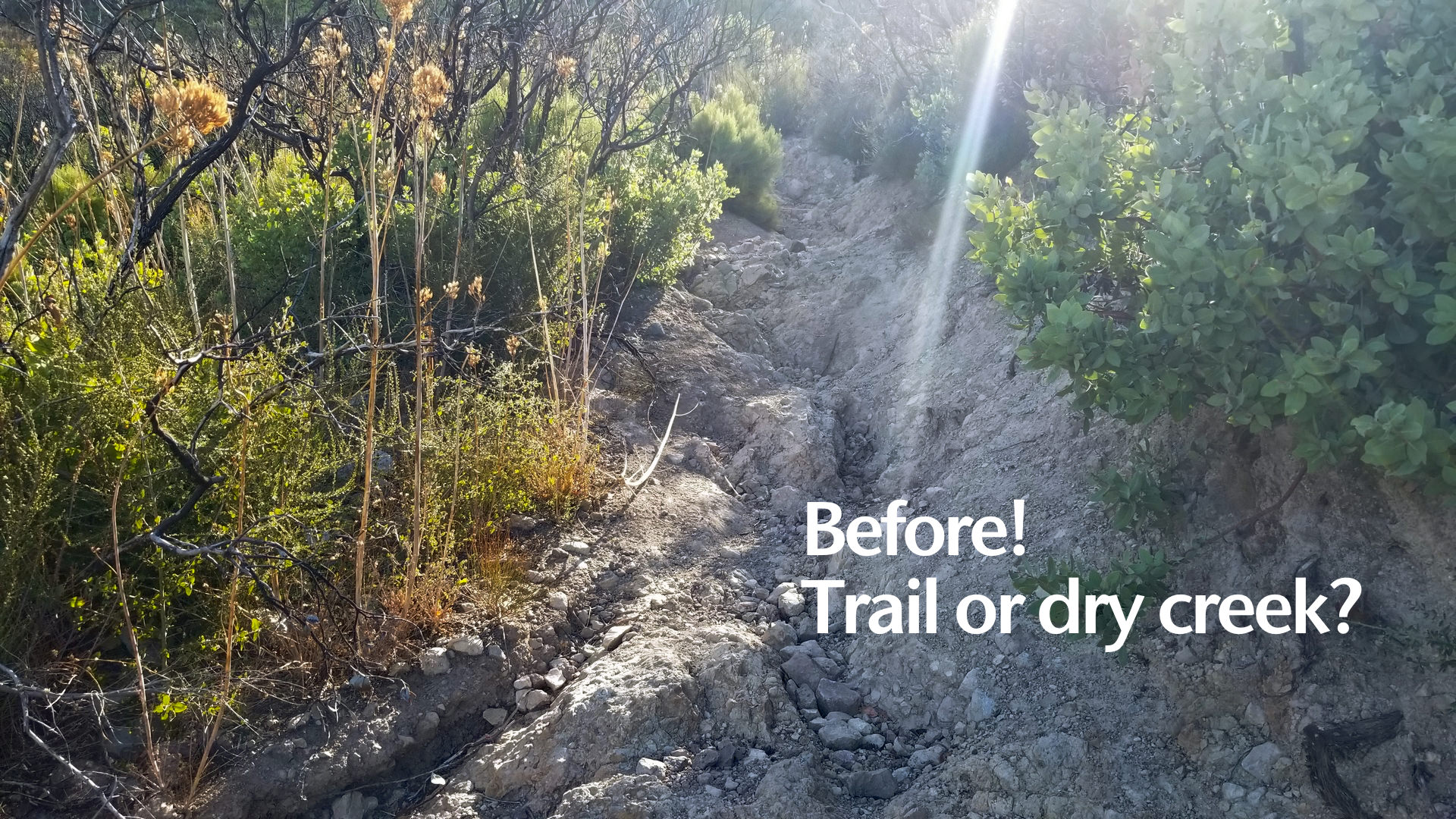 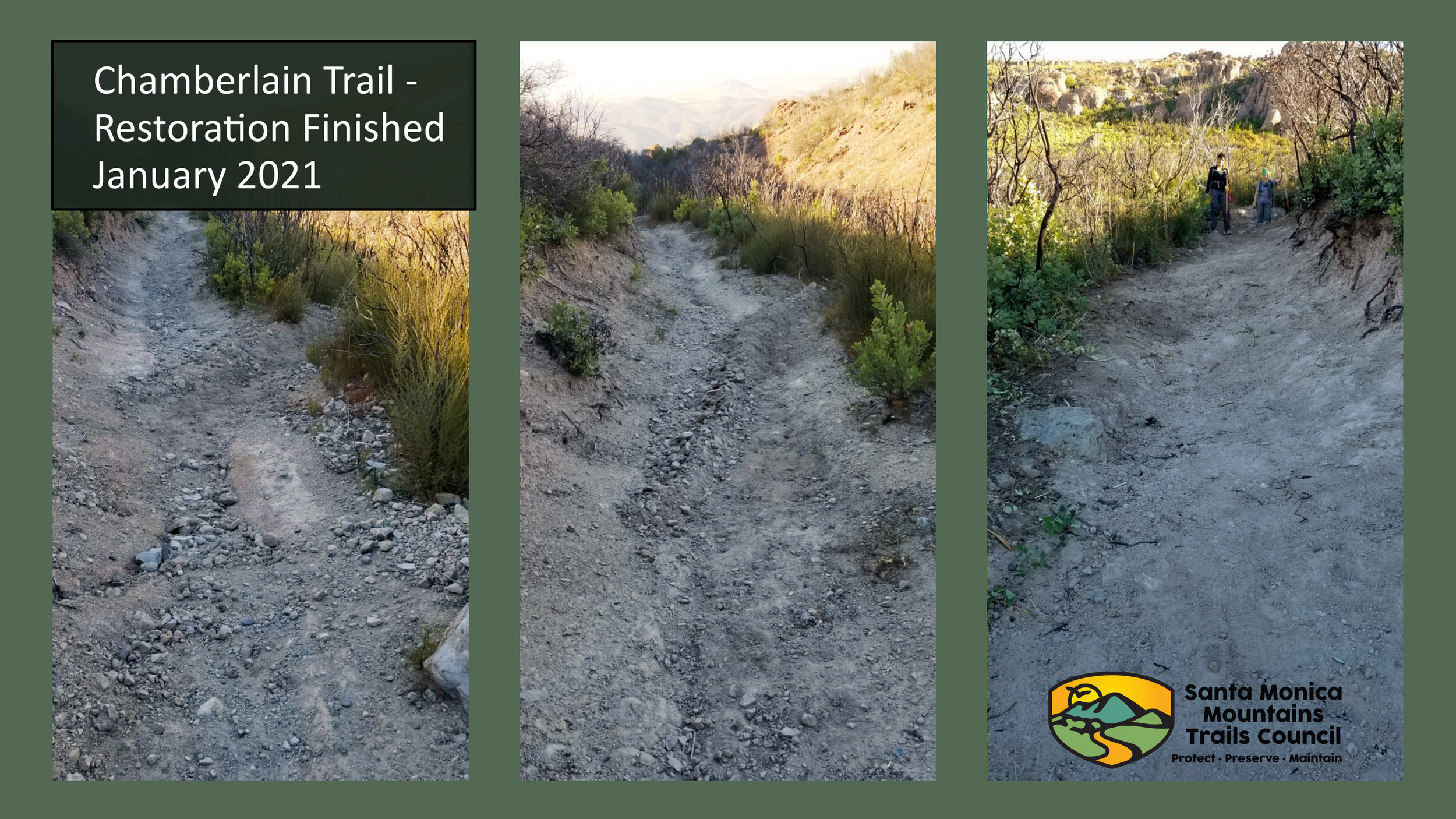