Ron Webster and the Trails of the Santa Monica Mountains 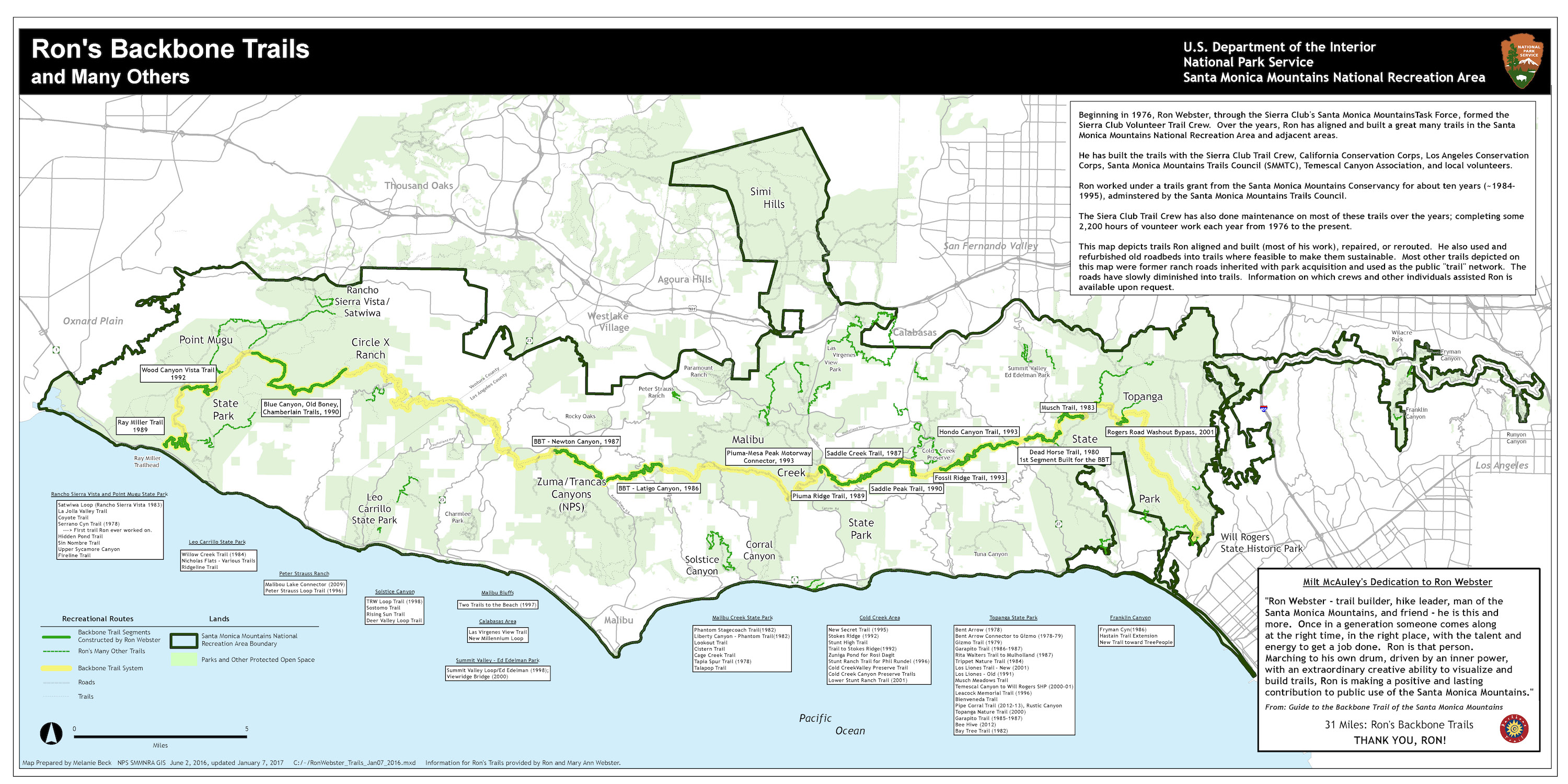 Thank you to Melanie Beck for creating this Map. Click the Map to Dismiss
↑

The first two attempts to preserve land in the Santa Monica Mountains failed. Whitestone National Park in the 1930s and Toyon National Park in the 1960's were two proposed national park projects in the Santa Monica Mountains prior to actual introduction of legislation by Congressman Anthony Beilenson and passage by Congress in 1978 of the Santa Monica Mountains National Recreation Area. During the 1960's, California Department of Parks and Recreation began an active acquisition process throughout the mountains followed by the Santa Monica Mountains conservancy in 1980. The Backbone Trail runs more than 67 miles trail from Will Rogers State Historic Park in Pacific Palisades through Topanga State Park, to Stunt Ranch in Calabasas, through Malibu Creek State Park, to Castro Crest along the ridgeline to Kanan, through Zuma and Trancas Canyons to Circle X Ranch, to Point Mugu State Park. The Trail spans Los Angeles and Ventura Counties, the City of Los Angeles, Pacific Palisades, Topanga, Calabasas, and Malibu.

“If you didn’t build a trail and invite people in, someone would come along and subdivide the land,” Milt McAuley told The Times in 2001. “To preserve parklands, you need access to it.”

Links That Provide Even More Info
Wonderful article about three women who helped shepherd the SMNRA into existence: Mothers of the Mountains A delightful article written about Ron Webster: The Ron and Mary Webster Story from Culver City Neighbors and written by Tony Garafalo An article from the Sierra Club periodical on Ron & Mary Webster The Santa Monica Mountains Power Couple: Mary Ann And Ron Webster

People walk all over my best work. - Ron Webster

With more than a few thousand miles of running logged on Santa Monica Mountains trails, a highly motivated athlete begins the first part of a long day’s journey across the mountains. Familiar place names connected by this segment of the trail are Rogers Road, the Hub, Eagle Rock and Musch Camp. Ninety to 110 minutes later they will be heading up Hondo Canyon. Up and over one canyon and then down another - piecing together the trails that make up the Backbone Trail. Resolutely, the athlete continues this relentless forward progress through the morning and into the early evening before reaching the terminus at the Ray Miller Trail head. Most of us will not be hiking the entire trail (67 miles plus!) in a single push. For the rest of us, savoring Hondo Canyon, Saddle Creek, Solstice, Trancas, Etz Meloy, Sandstone Peak, Chamberlain Rock and Sycamore Canyon in a multi-day journey of fascinating places will enrich our lives and provide fond memories as its own reward. None of this would have been possible without the efforts of those who envisioned, lobbied, designed and built these trails. The purpose of this page is to provide some background on how this trail unites the various pieces of the Santa Monica Mountains National Recreation Area.

Hard to believe that the Santa Monica Mountains Backbone Trail has not always been with us. Bits and pieces of trail date back more than a 100 years. Between those segments were miles of dense chaparral frequented mostly by mountain lions and coyotes. Before the trail(s) existed, one could only imagine what lay between points where the trail did not connect. After each trail segment's completion and often in only a few short months - it would appear that the trail was always there.  Challenging our view of what is possible are the visionaries and the trail builders who can see what is possible and then make it happen.  Visionaries have to convince others to invest in their wild idea and then find some method to finance the idea. Trail builders have to find a source of income, get approvals of trail locations, and only then, the hard work of shaping the landscape into a trail begins.

The Backbone Trail is a network of trails and fire roads that wind thru State and National Parks with a small portion connected thru trail easements on private property. Your adventure on the Backbone Trail could not have taken place 50 or 60 years ago - because the trail did not exist nor were there plans for such a trail until the late 1960s. The impetus for building trails and creating National and State Parks was the obvious fact that the suburbs were encroaching upon the mountains that had previously contained them. Like previous generations before them, a group of forward thinking people worked together to preserve the Santa Monica Mountains for future generations. The Backbone Trail would be the glue that held all the pieces together.

“You don’t feel totally isolated out there,” Webster said. “Mountain lions and rattlers are watching you, but you’ll meet a lot of people and still have a reasonably wild wilderness experience.” — LA Times

Groups of people came together to support preservation, our government entities allocated funds. We also held fundraisers. Meetings to discuss the trail produced detailed plans for the location of trail segments. At long last, one man stepped forward to lead the crews that built large segments of the trail. Along the way they built many other trails you are familiar with. Appearing at the right moment and place was Ron Webster. Ron had the right skills, knowledge, life situation and determination required to see this project through. Ron's first effort at building trails was on the Musch Trail. That trail was designed by Bob Stephens [this tidbit came from our minutes of January 8, 1985. Read the minutes of that meeting At this meeting Ron suggested that the SMMTC request a grant with the SMM Conservancy to build trails. ]  Over the years, Ron Webster became a prolific trail builder and developed a philosophy of creating trails that lay lightly on the land. Hike the Ray Miller Trail to see the way the trail contours as it gains elevation, lingers where it offers views of the ocean and then marvel that this was all built by hand with picks, McLeods, shovels saws and loppers.

Ron Webster was meant to help others. This much he knew. As he playfully told the tale, he was hiking in the mountains one day when he came upon a bush engulfed in flames. An ethereal voice commanded: “Ron Webster, lead the middle class into the Santa Monica Mountains!” — LA Times

Building trail in areas previously untouched by man required excellent map skills, bushwhacking, the flagging of an alignment, clearing brush, creating a trail corridor, outsloping the tread and dealing with poison oak, flies, bugs and more. Foot by foot progress eventually lead to the eventual completion of the trail.

Ron has an incredible list of trail building accomplishments. Notably, he deﬁned the trail's alignment and supervised the construction of over 30 miles of the 67-mile Backbone Trail - designated a National Recreation Trail upon its completion. Ron collaborated with National Parks, State parks and other land use agencies throughout his trail building years. Consequently, he is a vast storehouse of knowledge, skills and techniques related to trails. Long ago, Ron became the “go to guy” on virtually any question regarding trails in the Santa Monica Mountains. As great leaders do, he has transferred much of this information to other trail building crews. The Santa Monica Mountains Trails Council trail crew often joins Ron and his Sierra Club trail crew on work projects. In addition, the Trails Council trail crew frequently seeks Ron’s advice on trail projects. Ron has a unique ability to deﬁne just the right alignment for a trail. He always ﬁnds the route that gives the trail user the maximum exposure to natural resources while also protecting those resources. Ron’s mantra is that a trail should “lay lightly on the land.” He avoids using heavy machinery to build a trail, favoring hand tools and manual labor in all trail construction.

Ron Webster’s commitment to his vision of a trail system in the Santa Monica Mountains is extraordinary. Not only has he worked continuously to accomplish this goal, he has inspired and led thousands of others to assist in expanding this vision. In the past 40 years that Ron has advocated for trails as well as designing and building them, he is probably the most important individual contributing to the development of the hundreds of miles of trails in the largest urban park in the nation. He is a true Trail Champion. Scanned copies of his trail reports are included in the sidebar. 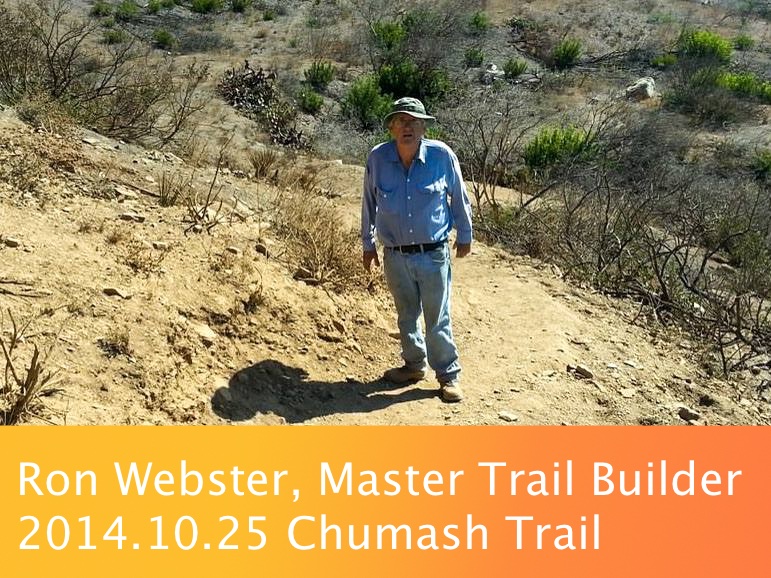 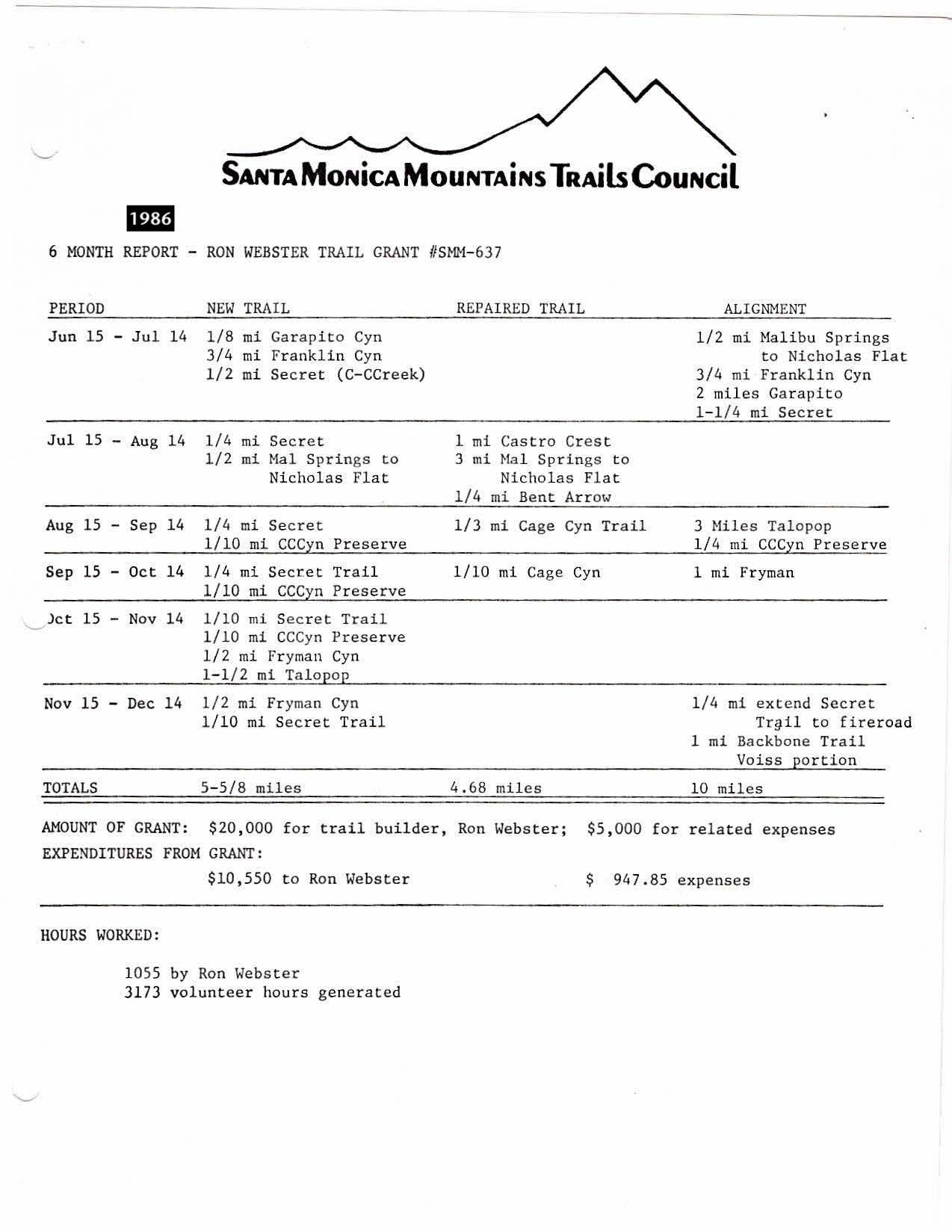 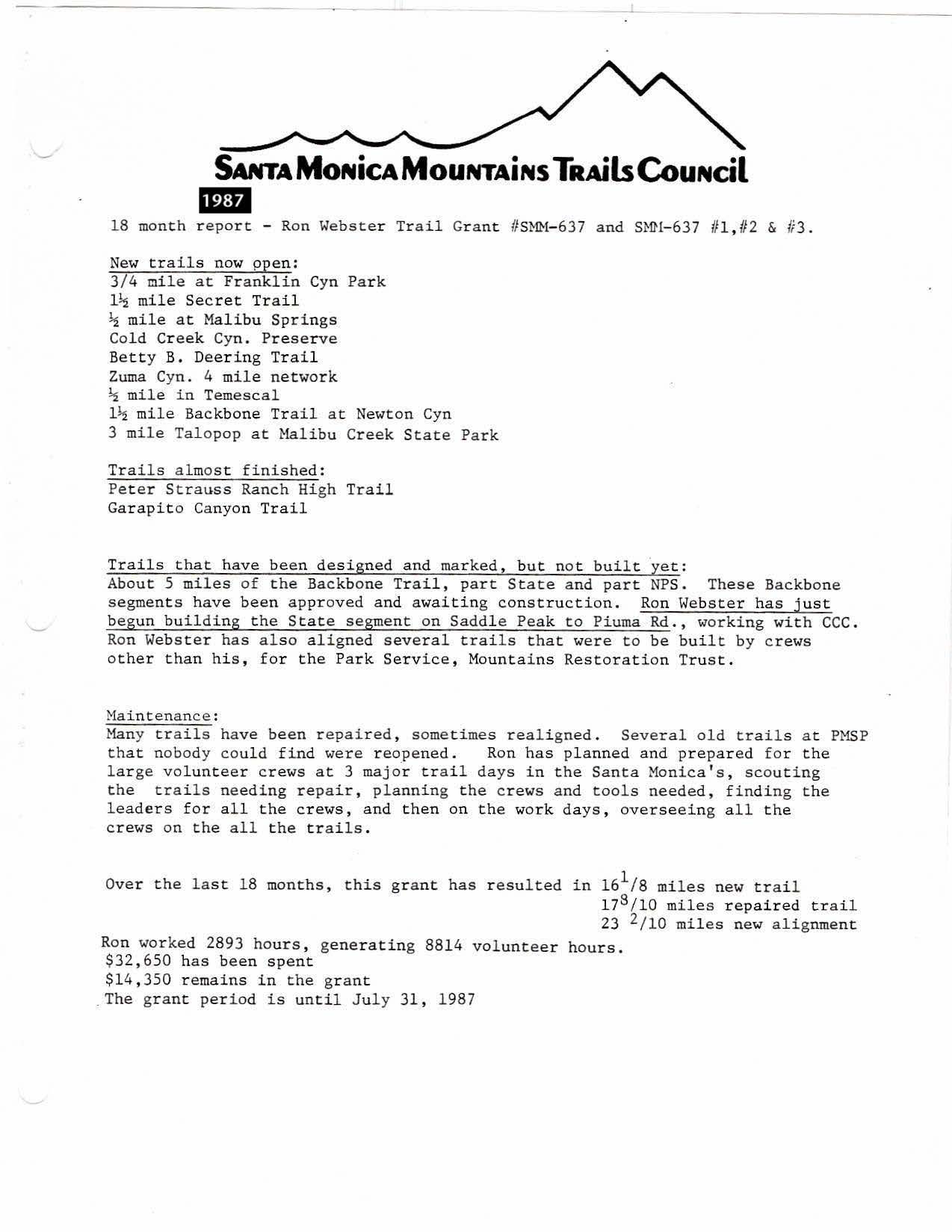 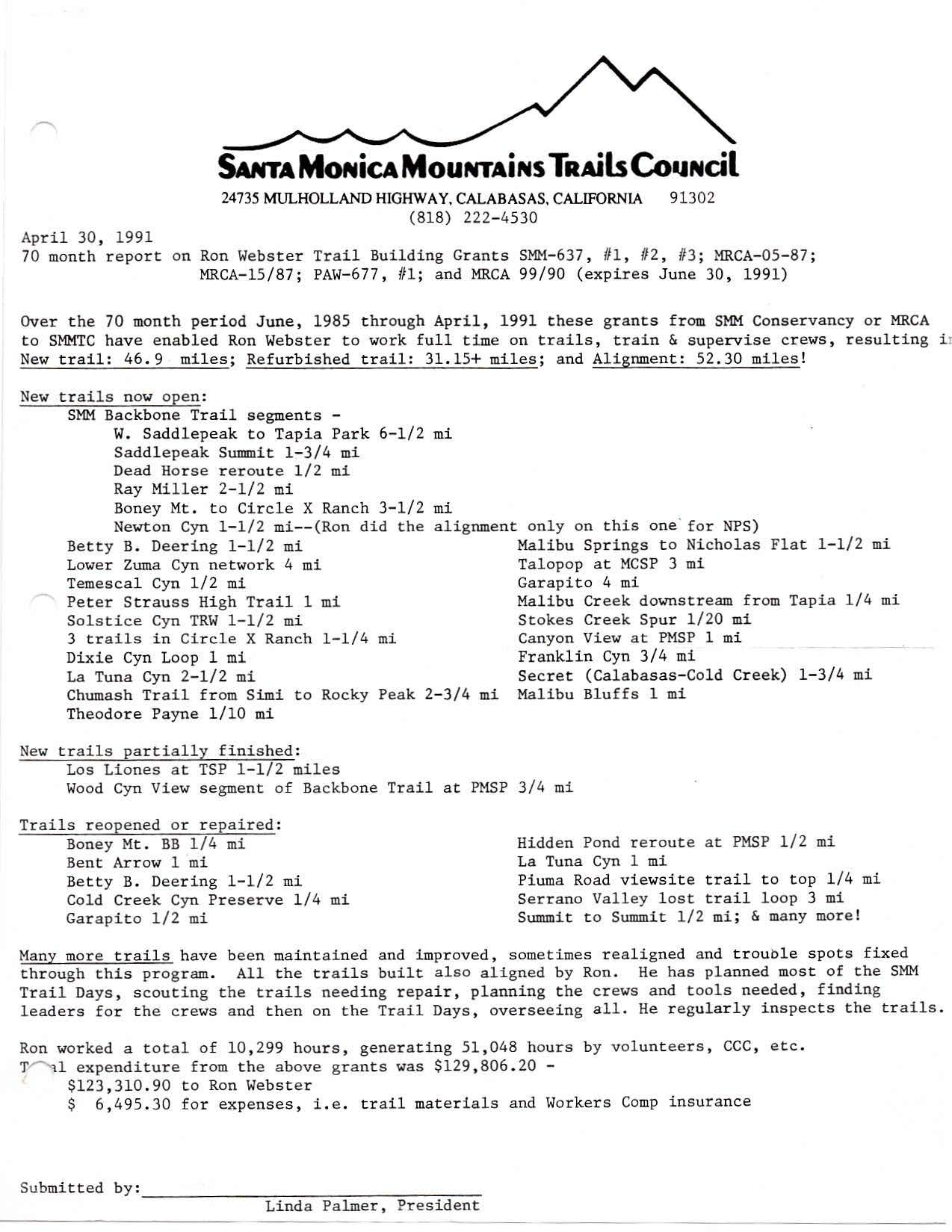